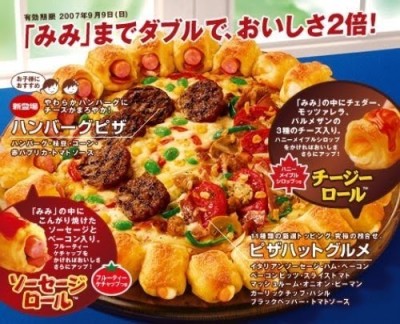 Another gut buster! What’s in it? Little bacon wrapped sausages that acted as the crust, and mini hamburger patties on top of the mushrooms, soy beans, corn, paprika, garlic chips, green peppers, and pepperoni. It has 3 cheeses – Mozzarella, cheddar and parmesan. It also comes with ketchup and maple syrup for extra flavor.

update:
Pizza Hut in the Philippines just released this pizza and called it Star Pops pizza. Food laws in the Philippines do not require listing of calories in fast food establishments and restaurants. I doubt anyone in Manila knows that each slice of Star Pops they eat has 646 calories and I’m sure loads of fat! I wonder if KFC Philippines will also release the Double Down sandwich? 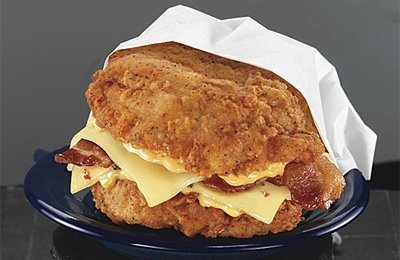 LATimes: The new KFC “Double Down”: two Original Recipe fillets, bacon, Swiss and pepper jack cheese and something called the Colonel’s sauce
They are testing this in Omaha and Providence, RI.

2 thoughts on “Would you eat this?”