People often ask me, “How do you remember everything you ate?” That’s a very legitimate question since it may be a month or two before I write about a restaurant I ate in. By that time I have already eaten in several restaurants in between. That was the case in my recent US trip. I ate out almost everyday for seven weeks and sometimes twice a day and there was no way I will remember the details of all those meals.

The secret is not my wonderful memory since that’s fried and gone already. It’s the notes app on my iPhone. As soon as I take a bite of food I write down all my thoughts on it’s taste and flavors. Nothing beats an immediate and first reaction to food.

When I was preparing to write this entry I opened my notes app and to my horror I realized I forgot to take notes on Limon. I immediately emailed Ariel to ask what he recalled about the food since Limon was one of his favorite chicken restaurants in San Francisco and he has eaten there several times already.

This entry was written by my guest blogger, Ariel. My opinions are in italics. 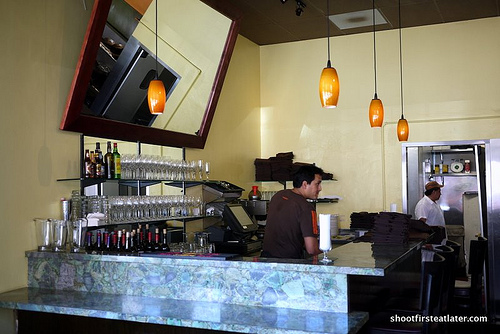 The 3 sauces are the aji amarillo,  rocoto aji and chimichuri. These dipping sauces  typically accompany any Peruvian meal.

Aji Amarillo sauce is made of yellow chili peppers with cheese (or queso fresco). This is a spicy sauce that goes well with roasted chicken, french fries or yuca fries. Amarillos are long and thin peppers that are bright orange in color but the unripe ones are yellow. The seeds inside will make a dish very spicy.

Rocoto Aji is another chili pepper that is actually apple in shape and can only grow in areas with cool climates. I am not sure what Limon mixed it with that made them look more orange.

Chimichuri is a sauce made from parsley, oil, vinegar and onion. In some Latin countries, they use cilantro.

I loved all the sauces because they complemented the food we ordered. They added an extra kick yet they weren’t too strong or intense to burn your nose. Some foodies even compared their sauces to chutneys or curries which I disagree. Ariel is right. I loved all the sauces. They made the food special and exotic.

Ceviche mixto was a dish made with raw fish, calamari and tiger shrimp marinated in citrus juices such as lemon, lime and sometimes chili peppers. Some also add onion, salt, and pepper to season it. Les said she didn’t like raw fish but we all enjoyed the Peruvian kilawin (a Filipino dish similar to ceviche)

The braised beef short ribs were braised in a huacatay-cilantro broth. Huacatay is another Peruvian herb used to season dishes. I read somewhere that this herb was related to marigold and tarragon and has an aroma that is a cross between mint and basil. The short ribs were so tender and flavorful. 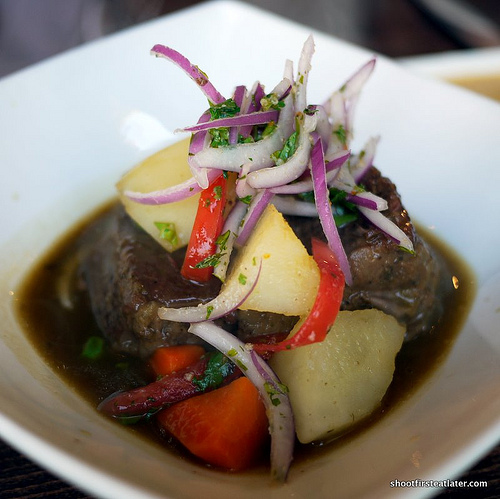 We ordered the veggie empanadas stuffed with mushroom, spinach, choclo and mascarpone cheese. We wanted to compare it with the empanadas we have in Manila. These fried stuffed pastries didn’t really make an impression on us other than it was pretty expensive for 2 small pieces.

We all loved these crispy pieces of chicken. It was like eating chicharon (pork rind) but in chicken form. These were marinated in soy sauce, garlic and the aji amarillo. I liked the flavors and crunch of the chicken. This is a popular appetizer in Peru.

I liked the fried chicken with the salsa criolla (onion relish) more than the rotisserie chicken. 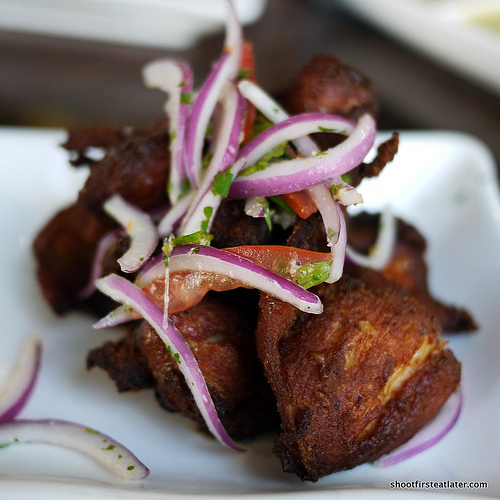 The free range chicken was slowly roasted in an open flame. This was their signature dish.  it was succulent, flavorful, juicy and delicious. It was so good that I ate the chicken skin even though I shouldn’t. The rotisserie chicken is viewed as a traditional or national dish. This is the dish that I come back for again and again.

I wasn’t really too impressed with the rotisserie chicken. I found it too salty but I agree it was indeed amazingly tender and juicy.

Yuca or cassava is a root vegetable common to South America and the Philippines. I liked these better than the potato fries. It was crispy on the outside but soft on the inside.

In the Philippines cassava is most often used for sweets like cassava cake rather than savory dishes. Some companies have made flavored cassava chips but I’ve never seen any restaurant in Manila serve cassava fries like this. 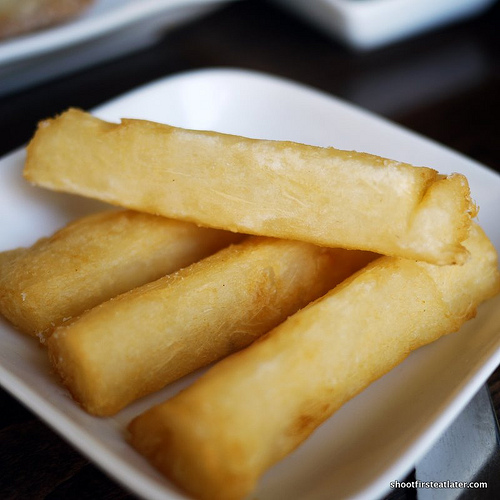 Overall their food is full of bold and exciting flavors. Their prices are very easy on the pocket. With all the food we ate was I only paid about $50 tax included. (It’s cheap because  servings were really small)

Thanks Ariel for introducing a new cuisine that Jeanne and I both enjoyed. Limon is one of the top 100 restaurants in the Bay Area as judged by SFGate for 2010. The others that I’ve tried that were also in the list were Bocadillos and Pizzeria Delfina. 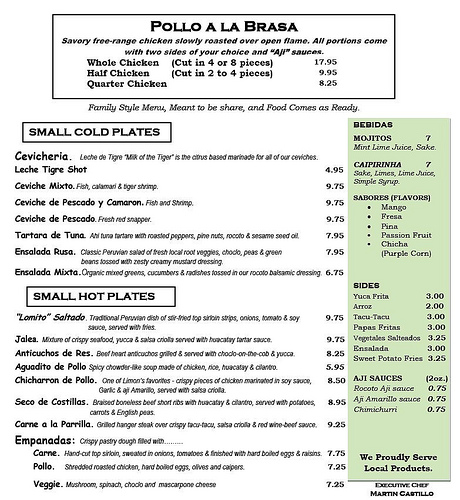