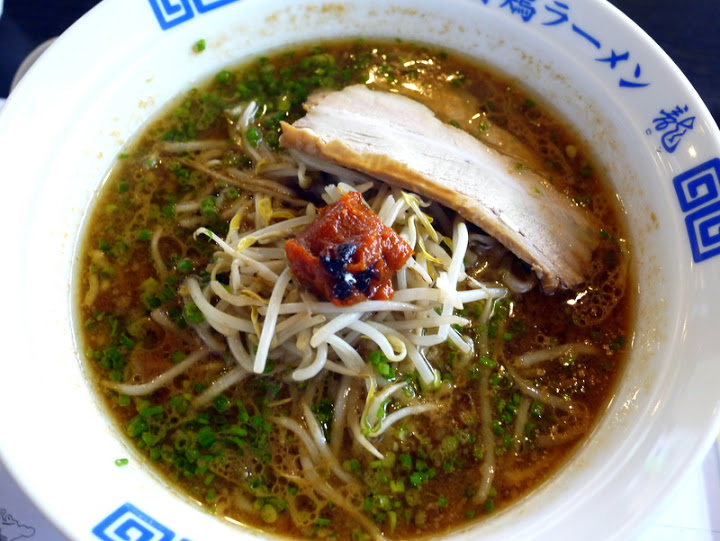 When a picture of a closed Ukokkei spread around Facebook and you could almost hear gasps of shock and dismay jump out of the comments section. The only thing that went through my mind was, “I haven’t even tried it.”

You see I’m not much of a ramen fan. I could go years without a bowl of ramen touching my lips. I find more joy in a plate of yaki udon or chahan, my choice of  Japanese carbs.

So when pictures of the reopened Makati branch surfaced,  my Ukokkei virgin friends and I decided once and for all to try this place led by our friend Deb who’s an Ukokkei fanatic.

We went there as early as 11:30 am so we can get seats. True enough by noon the restaurant was packed.

Take note of these items since they are not on the menu. Most of us ordered the Kara Miso Ramen with  a choice of 5 levels of heat.

We were all given just one glass of cold barley tea for free. I heard that their Malate branch gave unlimited refills.

The gyoza was pretty good with it’s thin skin and crispy bottom. The pork filling was salty enough not to need any soy sauce.

Sam was the only one who ordered a shio (salt) soup base ramen. She just likes the milder broth. Other options for the soup base are shoyu (soy sauce) and miso (soybean paste).

Based on Deb’s suggestion most of us ordered the Kara Miso Ramen with level 3 heat. First thing I did was put all the chili paste on another plate and added some to my soup little by little. With the amount I used I think next time I will just order level 1.

The most important thing to remember when ordering at Ukokkei are the words “katamen” and “less oil.”

Katamen means you want harder or more al dente noodles. This is important since the hot soup continues to cook and soften the ramen noodles while you eat. This way you won’t be left with soggy noodles by the time you’re half way through your bowl.

Less oil if you want a cleaner tasting broth and you’re more health conscious. But if you want all the goodness fat brings just don’t mention it.

So what’s the fuss all about? Why is Ukokkei one of the most popular ramen places in Manila? I tried a spoonful of the soup and had the answer right there. The miso soup was 3D and a burst of umami flavors in my mouth. I’ve never tasted a more “in your face” soup base before. It tasted like it’s been simmering for hours. The ramen didn’t even need the thin slice of pork. Just the soup was more than enough for me to eat all the wonderful al dente noodles.

Two of my friends ordered the lunch sets which seemed to be a very good deal. Set C had a small bowl of miso ramen, curry rice, gyoza (not in picture) and a side salad. We tried the curry and it was yummy but you need to eat it quickly while it’s hot. It turned too greasy when cold.

Janet’s lunch set had a plate of yaki soba (fried noodles), soup gyoza, onigiri (rice ball) and side salad. She didn’t eat the onigiri so I don’t know what was the filling inside.

I was really happy with my ramen but I had to force myself to finish the whole bowl. I was soooo full I felt I pants were going to burst. I now understand why Ukokkei is so popular despite all the horror stories I’ve heard like not being allowed to sit on the edge of the ledge while putting on shoes. There’s also no peeking in the open kitchen, no sharing and all the rules had me meek as mouse lest they kick me out for laughing too loud. But when the guy at the table next to us spoke loud enough for us to hear his stories and he didn’t get ejected we began to relax and laugh more.

I was SO DISAPPOINTED that Ukokkei’s nazi tendencies were ABSENT when we were there. All the servers were pleasant and smiling, our food and bill came out fast. My friends were able to sit and wear their shoes. Did their short closure scare the beejeebies out of them? Darn I was hoping to feel the heat. Oh well….

After lunch we didn’t linger and moved to Deb’s house for coffee and dessert.  I’ve always wanted to try Wildflour’s sticky buns but it was out of stock when I went back. Deb was so thoughtful to buy a box full of sticky buns for our dessert.

Not too sweet and not bad at all. I wasn’t just blown away like I was expecting. I think using the more traditional pecans would have tasted better on the sticky buns.

Someone gifted Deb with these and she generously shared them with us. It was just average. The filling was a custard similar to yema but not as sweet. It was different all right but for us who are used to this kind of taste it was nothing unusual.