Tim Ho Wan finally opened in SM Mega Fashion Hall (SM Megamall Bldg. D) last May 20, 2014, Tuesday at exactly 12:00 pm. At that time my friends and I were at Mu Noodle Bar having lunch. While eating I was looking at pictures of the long queue to Tim Ho Wan on Instagram.

If you’re not familiar with Tim Ho Wan and wondering what all the fuss is about let me give you a brief background. Tim Ho Wan originated from Hong Kong and is most known for being the cheapest Michelin 1 star restaurant. Their original 15 seater branch in Mong Kok was perennially full that I’ve never eaten there  and I’ve only taken out food.  That branch has since closed and moved to another location.

Now you understand why so many have been waiting for Tim Ho Wan to open in Manila and thanks to Rikki Dee and his family it’s finally here. 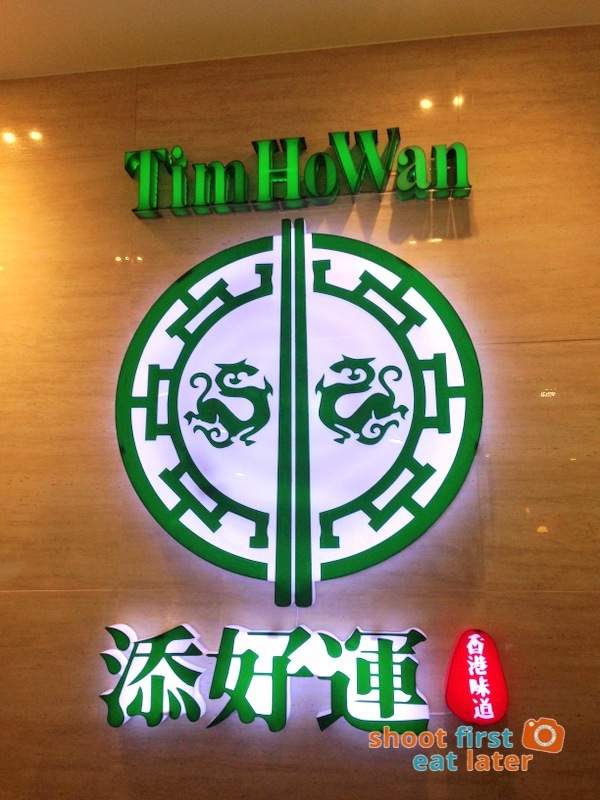 Right after lunch we took the chance to see if we could get in. It was almost 3:00 pm and the lines were still long. Luckily Mr. Dee spotted my friend and kindly gave us a table.

I never dreamt I would get to eat at Tim Ho Wan on its opening day so I didn’t even have my camera with me. All these were taken with my iPhone 5.

If I’m not mistaken Tim Ho Wan is the first all dim sum imported restaurant in Manila. This is actually a dream of mine since I love to eat dim sum any time of the day. In Hong Kong dim sum is served during breakfast and lunch only. The menu in Manila lacks a few items from the Hong Kong menu but most of my favorites are here so it’s not a big deal.

The most popular item in THW is the Baked Bun with BBQ Pork P145. I usually bring home several orders of these buns from HK. The filling is made from sweet BBQ pork just like siopao. It’s the bread topped with a flaky mixture that makes this so special. This kind of bread is called pineapple bun in HK. It was served piping hot fresh from the oven and when you take a bite you could actually hear a little crunch which you quickly forget since the taste of the sweet, crisp topping, soft fluffy bread and delicious filling will overwhelm your senses. The biggest question was, “Does it taste like the one in HK?” My answer is, “YES!”

Currently they don’t allow just take-out orders only but if you eat in the restaurant you can order extra and have it wrapped up. I think they allow up to 3 extra orders of the BBQ buns per table. Take-outs will be available in one to two months according to the cashier.

There is definitely more to THW than their BBQ buns and my next favorite is the Beancurd Skin Roll with Pork & Shrimp P120. Whenever there’s dim sum I always order this so I had to try THW’s version which didn’t disappoint. I’ve eaten bean curd skin rolls with more fillings but even if these rolls were on the skinny side the sauce was really spectacular. It made the rolls taste so good and I could easily eat an order all by myself. They also have fried beancurd skin rolls which I will try next time.

The Singaporeans call it Pan Fried Carrot Cake P145 but we know it as radish cake. Radish cake is made with rice flour and grated radish. Most of the ones in Manila you could hardly see the radish but this one had large generous strips of soft radish which we really loved. It was so good that it didn’t need any catsup or soy sauce.

The Prawn Dumplings P160 or har gaw had nice, plump and fresh shrimp inside. Another winner.

We were really pleased with all the food we ate. I just hope they will be able to maintain the good quality.

The only dish I won’t be ordering again are these vermicelli rolls without any filling but topped with sesame sauce and hoisin sauce. I don’t get it but my friend Deb loves it. I’d rather have rolls filled with BBQ pork or shrimp.

They only had two choices for dessert and we ordered both. Four of us shared one order of the Mango Pomelo Sago P80 and it was a bad idea. I suggest you order one each since it was sooooo good. The fresh mango soup was sweet yet tart and had mango cubes and some pomelo bits. It tasted even better than those found in big Chinese restaurants in Manila.

I’ve had this in Hong Kong so I didn’t let the strange name scare me from ordering it. Tonic Medlar & Osmanthus Cake P70 sounds strange but it’s just sweet jelly filled with healthy ingredients. Try it!! I wish it were less sweet though.

I brought one BBQ bun to my store to eat the next day and I was too impatient to heat it in the toaster oven so I pressed it in my panini grill and in less than a minute I got a thin, crunchy and hot BBQ bun. It doesn’t look as nice but it was yummy I tell you.

After our heavy merienda I met this cute little (?) 5 months old baby boy who wears clothes for a 2 year old. He could be my son right? 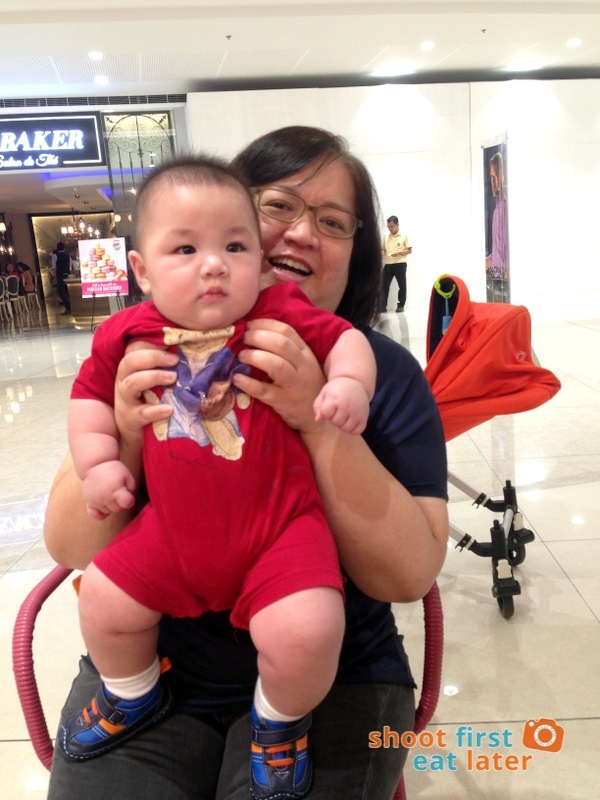 I passed by Tim Ho Wan yesterday, Sunday, around 4:00 pm and the lines were still long. Kudos to the owners for providing seats for those who were waited patiently. The best time to go is on a weekday around 3:00 pm when the lines are the shortest. I suggest you go soon while the Hong Kong chefs are still in town. I can’t wait to go back and try the Glutionous Rice in Lotus Leaf, Teochew Dumpling, Wasabi Salad Prawn Dumpling, Fried Beancurd Skin Roll with Shrimp and Pork Rib with Black Bean Sauce.

Congratulations to the Dee Family for another big hit.