I never knew there was a new buffet place at the Manila Hotel until I saw Jin’s post.

So yesterday 12 of us trooped to the Manila Hotel armed with 6 copies of 50% off coupons from 6 Sunday issues of The Manila Bulletin. Smart move huh?

Warning there are lots of pictures on this post. It may take time to load. Be patient and you will be rewarded. My problem with buffets is I take too much pictures and I can’t bear not posting all of them. Well almost all of them. From 268 pictures I’m posting only 61.

I can’t remember the last time I went to the Manila Hotel. I think the president at that time was Fidel Ramos.

The lobby was as grand as ever.

Just outside the entrance of Cafe Ilang-Ilang were these two life sized people that I didn’t even notice when I first entered. It was later on when they attracted attention that I realized they were real people. 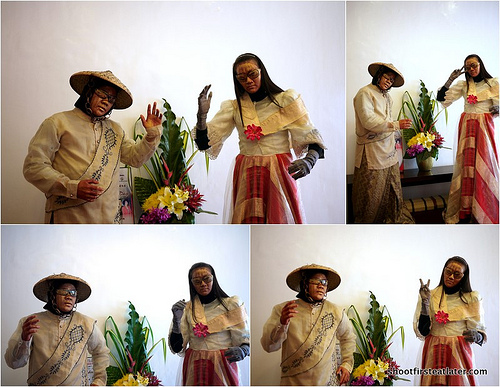 The restaurant had several seating options. From comfy couches to elevated tables (middle picture) which were my favorite.

We sat in a beautiful private room called the wine and cheese room. I was so tempted to bring home the sausages and cheese stored in the chillers in the room. 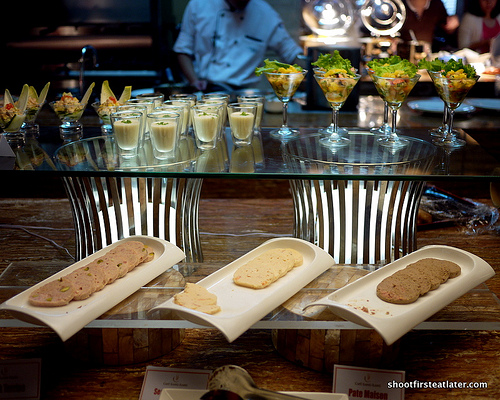 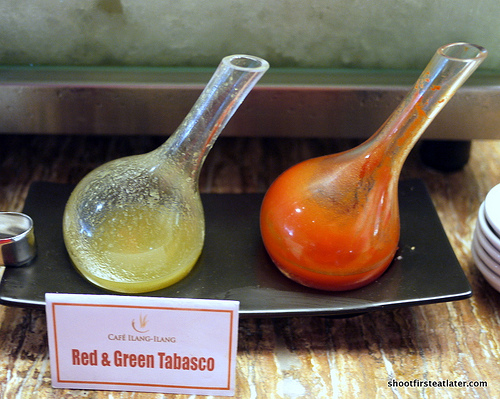 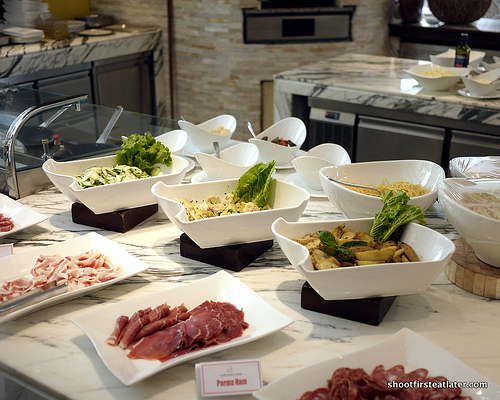 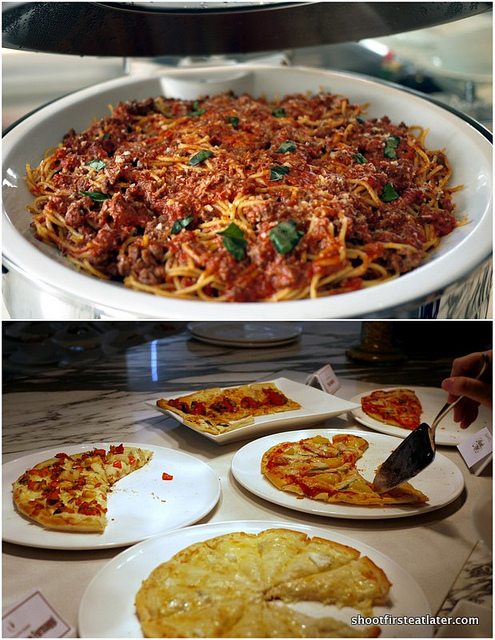 The pool area was accessible at the back of Cafe Ilang-Ilang. 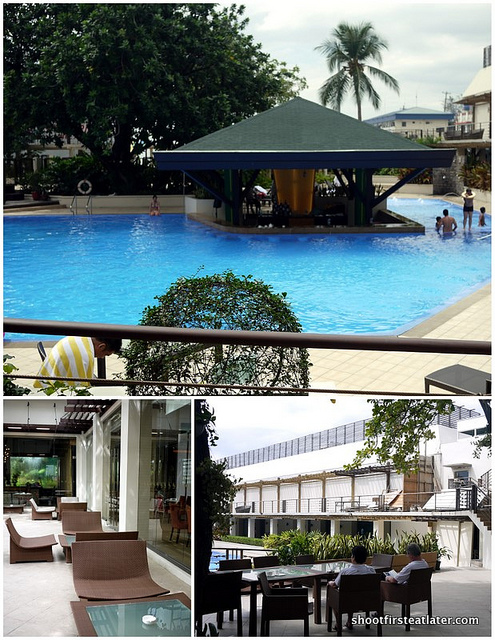 In the middle of lunch we were treated to a local dance. 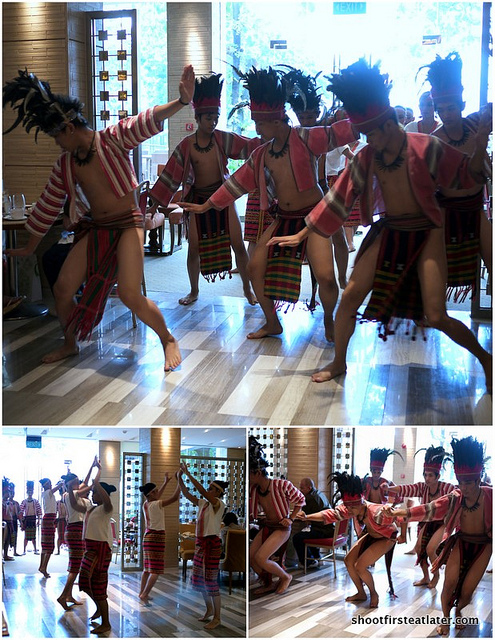 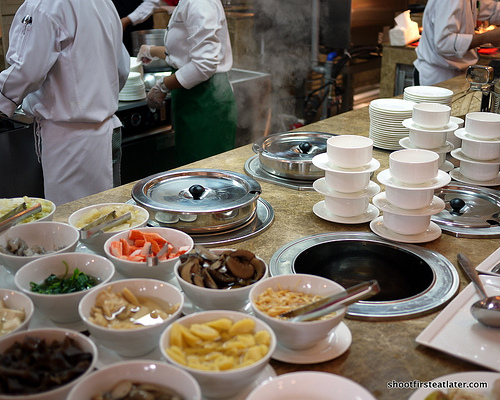 The shrimp was replaced with spicy fried squid which was so good and tender. 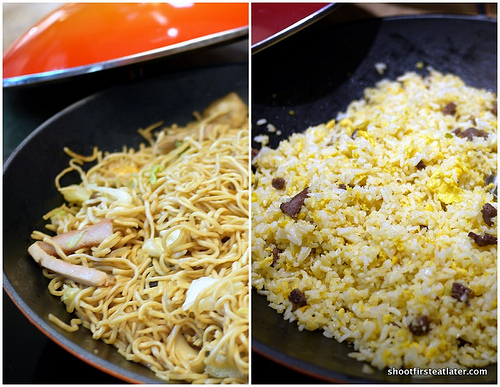 Next to the Chinese food is the Filipino food selection.

The rice was a miss. Too soft, mushy and no flavor at all.

I tried the rice in squid ink and it was totally flavorless. The chicken empanada was just ok but the pork tapa was very, very good. If you eat that you will need a whole cup of rice. It was salty but very flavorful. 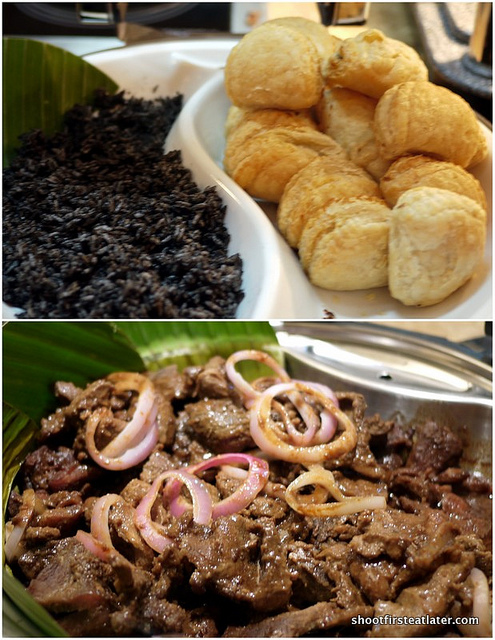 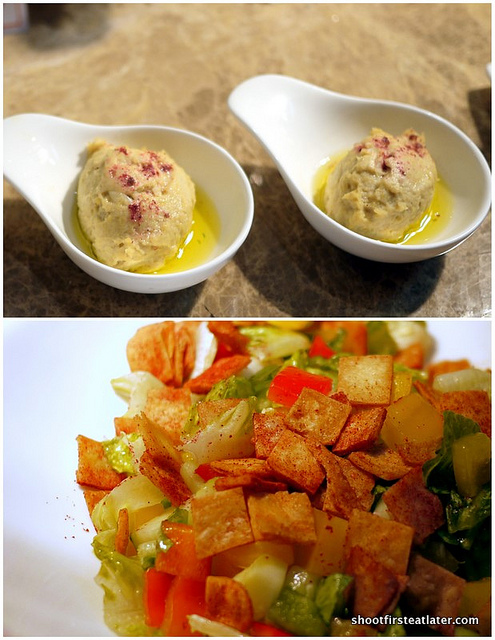 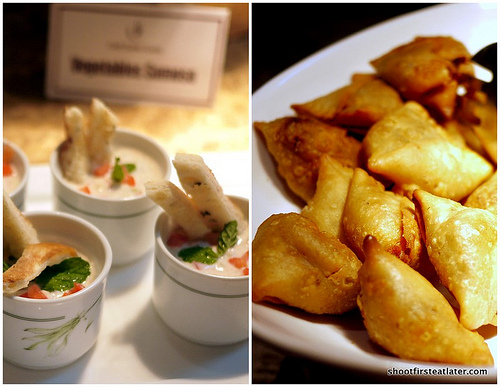 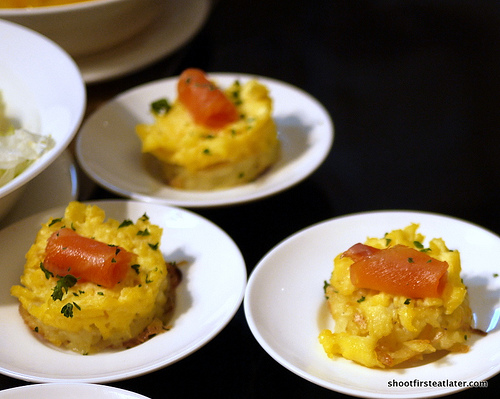 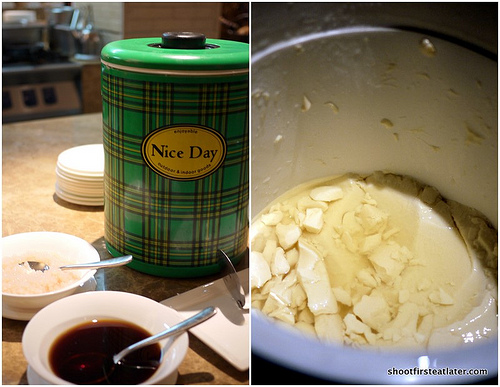 The breakfast selections are available on Sundays only.

Grill station. Oysters can be grilled by request. 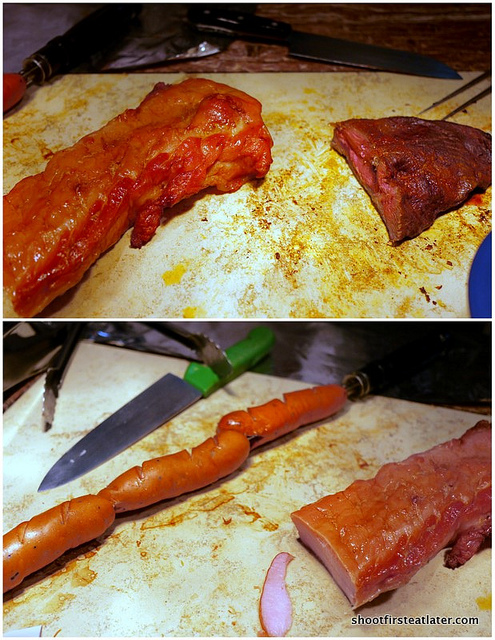 Korean station. The chef in the middle is Korean. For me the food here was the best. The bulgogi and chap chae were yummy. The kalbi was a bit tough and dry but the taste was good.

The dessert station was very impressive but most of the desserts had a lot of improvement needed. 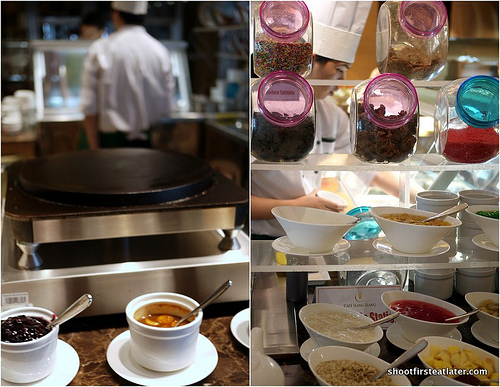 The display was beautiful but the small desserts were really, really bad. 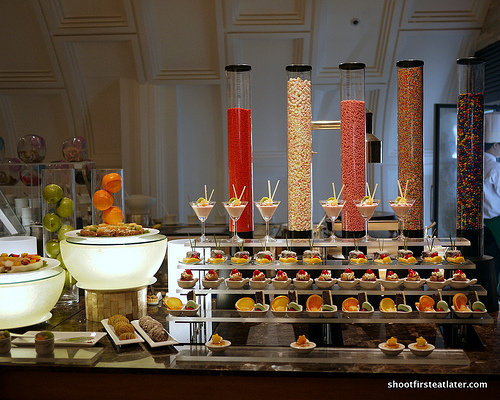 The only thing I liked was the bibingka. They didn’t make a new one when it was finished. So better get this first.

bibingka or rice cake with salted eggs and cheese 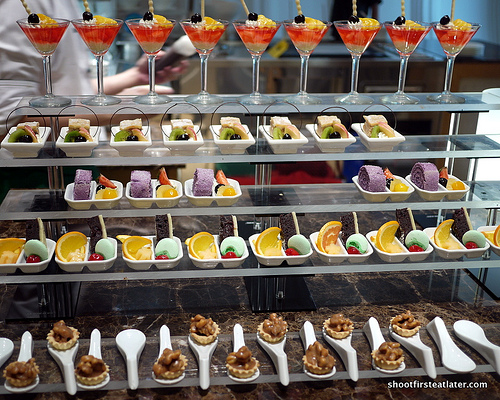 The gelato was a big hit with everyone. 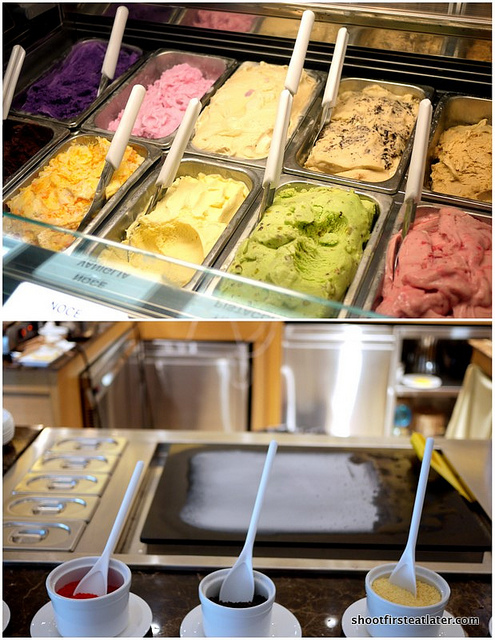 You can order any kind of coffee you want- latte, cappucino or just espresso. The guy in charge of making coffee told me the huge espresso machine cost P1.6 million. I googled it and it was worth $15,000. So I guess the real price is somewhere in between. It did make really good coffee. 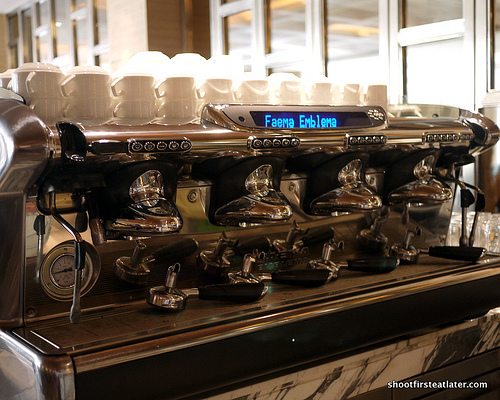 I’m not really a big fan of buffets because I easily get overwhelmed and believe it or not I get full fast. That’s why buffets aren’t a good deal for me.

Here’s what I ate. I really, really loved the paté maison. It was so rich and creamy. I really wanted a crisp cracker like a lavash for my cheese and paté but they only had soda crackers and bread. 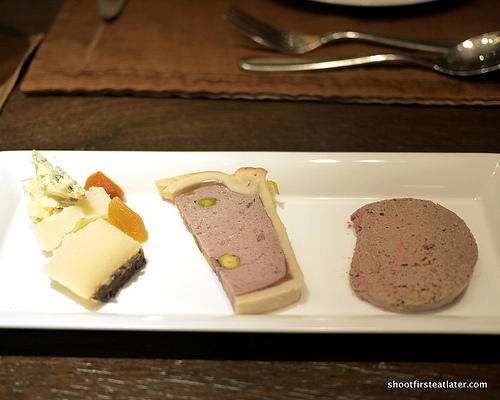 The hummus was a bit dry. The roti was too thick for my taste. 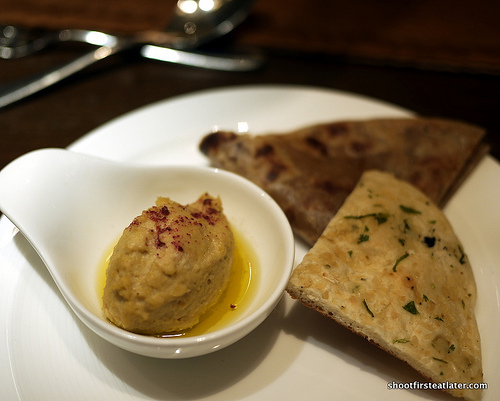 hummus with roti and naan

My downfall was the chicken shawarma. After I ate this I was full. I did enjoy it very much though. I ate half of it and just the chicken filling for the remainder. I loved the taste of the marinated chicken and the garlic sauce. 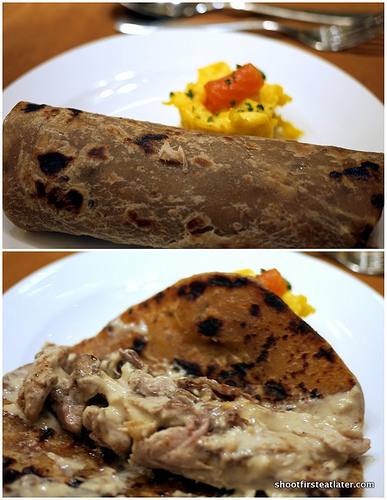 The only thing I ate on this plate was the beef bulgogi, kalbi, fried squid and pork tapa. Both rice, sweet potato tempura and tokwa’t baboy were not worthy of their calories and precious space in my stomach. 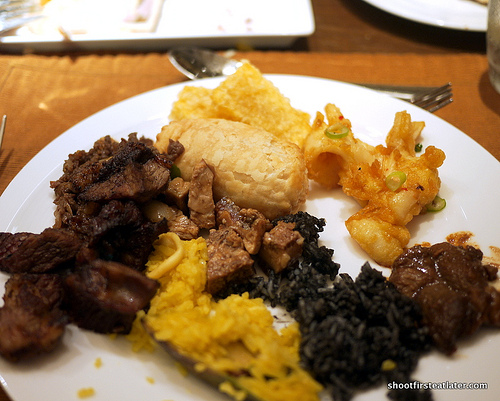 My real main course was the dessert. I had bites of the regular and ube ensaymadas. Not bad but a little dense and bread-y. The bibingka was dry on the outside but really dense and gooey with the texture of sticky mochi. I loved it.

I had 5 small scoops of gelato – tiramisu, walnut, mocha & mixed berries. They were all good but the best was the tiramisu gelato.

The slice of cake of the top right hand of the picture which I thought was cheesecake was horrible, tasteless gelatin like layers with a chocolate cake base that didn’t taste like chocolate at all.

Below that is another chocolate cake that had zero taste or flavor. They really have to improve their desserts. No wonder everyone just got gelato.

The best double shot cappuccino from a hotel buffet. Ever.

The kids on our table went gaga over the steak. Christine had 12 slices! 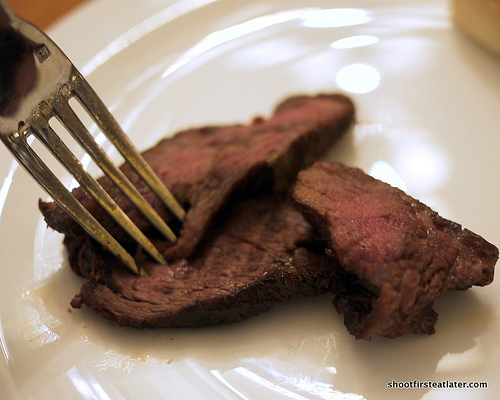 I tried my seatmate’s quattro formagio pizza. The topping was great specially the blue cheese but I found the crust a bit too thick and doughy.

Did the pictures make you drool? I leave it to you to judge if this is the best buffet in town. For me my favorite is still Inagiku.

kids below 12 half price

10 thoughts on “Cafe Ilang-Ilang at The Manila Hotel”