It’s my blog’s 9th birthday and my gift to all my readers is a new post 😉. I blame Instagram and other social media sites for my neglect of this blog. It’s just so easy to post and write a short caption on Instagram than to do a single blog post that takes me hours.  So please enjoy this post of my recent dinner in Pampanga.

If you’ve heard about Denlim’s Kitchen then you also know that’s it’s very hard to make a reservation. Since his private kitchen is open on weekends only it’s booked 6 months and more in advance. When my cousin asked me if I wanted to join her and her college friends to eat at Den Lim’s Kitchen I immediately said yes. I didn’t ask when or if I knew any of her friends. I just wanted to go.

The trip took 2 1/2 hours from Manila but it didn’t feel like it because I chatted with new friends in the van non-stop. It was easy to find since Waze knew Denlim’s Kitchen very well.

When we first entered I was surprised how big and airy the place was. From the pictures I saw online I always thought the place was small and cramped. I just loved the homey yet industrial feel of the place. There was no air-conditioning but luckily there was a nice cool breeze that evening and I didn’t once bring out my fan. 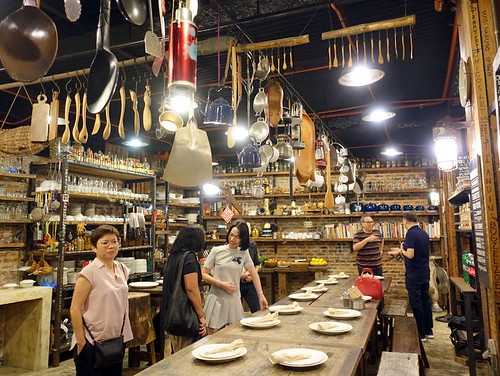 <Tp: Bring your own white or fluorescent pen if you want to leave your mark anywhere in the place.

I asked Chef Den how he got started cooking. He told me in college he had 4 roommates and they each had their own assignment in the apartment. Since he hated cleaning he volunteered to take care of the food. In the beginning his job was just reheating food and then he started to experiment cooking. He had a knack for it and eventually became the chef he is today.

<Ijust love his chopping board! 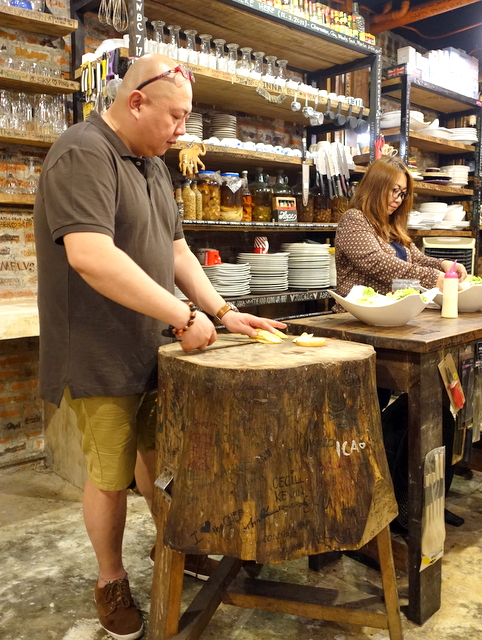 <Iknew it was going to be a 7 course dinner (not counting the bread and dessert) so I had to pace myself. They only offered soft drinks so you can  bring your own bottle. I stuck with water.

The starter didn’t look like much until you took a bite. Fresh mushrooms (shiitake, abalone, golden and button) were sautéed and simmered in marinara sauce and topped with mozzarella cheese. The flavors were very umami and it was very hard to stop.

<Tey bake their own bread and served it with bangus paté which was made with bangus (milkfish that I suspect was smoked), capers and olive oil. The simple combination was utterly delicious. I loved it so much I immediately asked if it was for sale. It was and a few of us bought it.

<Ihad the bangus paté with crusty crunchy bread for dinner the next day and it was fantastic.

<Te salad had a pleasing dressing made with yogurt and sour cream, thinly sliced apples, singkamas, raisins, walnuts and a drizzle of honey. What made this salad special was crunch from pinipig (toasted rice). That was the first time I’ve had salad with pinipig.

<Tey transferred the leftovers from the salad into a bowl.

<Oe of the aspects of Den Lim’s cooking that I like best are the layers of flavors of his food. I’ve eaten a lot of gambas before so I wasn’t expecting much from this but as soon as I ate a piece of perfectly cooked succulent shrimp I was instantly impressed. At first bite I tasted the usual flavors of garlic, paprika, a little citrus then came a subtle slow heat. I wanted to eat more but I this was just the beginning.

<Eeryone can cook salmon at home but I assure you it won’t taste like this. The salmon had a Japanese flavor to it. It had soy sauce and just a touch of sweetness.  We were instructed to take a piece of salmon and some whipped dill cream cheese and eat it together. Boom! The combination of sweet, salty, creamy and cheesy was extraordinary. For something that looked so simple it was  everyone’s favorite dish of the night.

<Tis pasta dish was named after the chef’s beloved partner, Corrito who helped out during dinner. I love pasta without tomato or cream sauce that’s full of flavor. The secret was boiling the spaghettini in the chef’s secret master brine made with wine, stock and all kinds of flavor bombs. Perfectly timed seafood with roasted tomatoes definitely pulled the whole dish together. I was so full after this.

<Cef Den explained how he cooked the beef shank for 6 hours. I was also mesmerized with his plating. He took a whole tray of grilled white corn (malagkit kind) placed it around the beef and poured melted butter over it. He then spooned hot gravy over the beef and sprinkled it with garlic. It was super tender but lacking in taste for me. I was too full and shy to ask for some Knorr liquid seasoning which would taste awesome with the beef and a plate of garlic rice. 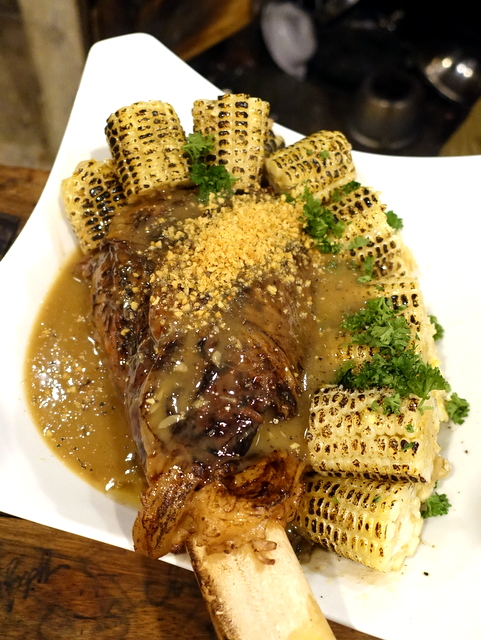 Caveman’s Shank<H barely nudged the meat and it came apart. You can watch the video with audio on my Facebook or Instagram page.

I definitely couldn’t eat another bite but I tried a small piece oven baked pork without wrapping it in lettuce leaf with a tomato, ampalaya (bitter gourd) and buro (fermented rice). The flavor of the pork was very good unfortunately the skin was hard.

<Cef Den showed us how to eat the lechon.

They didn’t serve dessert before until many people asked for it. This Queso de bola cheesecake came from Teaspoon Cafe in Pampanga.

<Tank you so much to birthday celebrant Jannette who treated us for dinner. 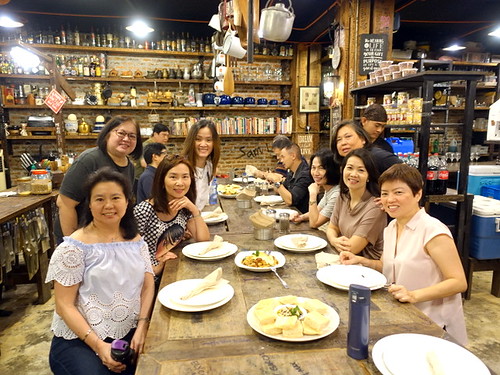 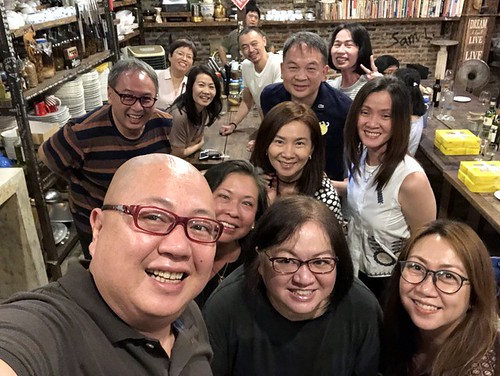 <Ihighly recommend Denlim’s Kitchen but be sure to go hungry and pace yourself. There’s a lot of good food to eat. Try to reserve as early as you can and figure out who to invite later on since they only accept one group per dinner. They accept a minimum of 12 to 24 people. Our meal cost P1,750 per head.