There is no shortage of Spanish restaurants in Manila and every time a new one opens I want to try it since I just love tapas and paella.

Las Flores is owned by Spanish nationals so it promised to be authentic.

Look at the picture below. See the two slices of bread with walnuts and raisins? Well I loved those. Too bad they never appeared again even on the second plate of free bread. 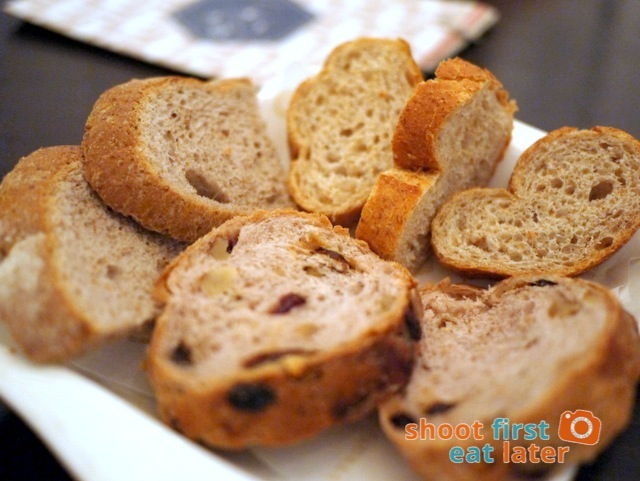 Generally the food was good but I had my favorites as well as some I will skip next time.

My most favorite dish was the trio chorizos. Yes, those few pieces of chorizos cost a lot of money but every bite was worth it. One chorizo was spicy, another one was tangy and the last was your typical chorizo. All were full packed with flavor that one bite was enough for a slice of bread. I can just imagine ordering this with a plate of garlic rice. Sigh… that would be glorious.

The croquetas were another pleasant surprise. It wasn’t your typical mushy mixture but instead it had a blast of flavor and texture from their excellent chorizo.

I didn’t try this dish since I wasn’t fond of baby eels but Rochelle said she tasted mostly the eggs and mushroom.

Delicious Australian Angus beef topped with foie and caramelized apples was what the menu promised. It sounds good but I wouldn’t order this again. The beef was over cooked and under seasoned. The barely there foie gras wasn’t enough to make me happy. At P206.25 a bite I would rather order something else since one piece was really ‘bitin.’

Both paellas were quite delicious even though their versions were wetter than what we’re used too.