With several new restaurants in SM Mega Fashion Hall (Building D) that I wanted to try we thought it would be best to eat a little in each place just to get a feel of the food and decide if we want to go back for a more in depth exploration.

Our first stop was at Osaka Ohsho for appetizers which were three plates of their superb gyoza. For our main course we went next door to Boqueria. We were supposed to go for dessert specially when we saw they had churros but unfortunately they ran out of dark chocolate so we had paella instead. See how quick our appetites were satisfied? 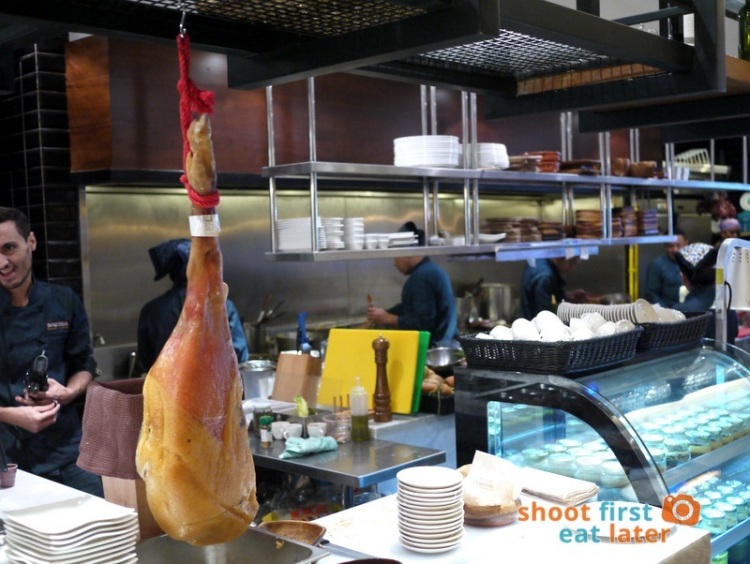 It was nice to see a Spanish chef manning the open kitchen.

I loved how they used the same tiles for the floor and wall.

Boqueria offered 4 kinds of paella and it was a quick decision for us to order the unique Paella Queso Manchego with their homemade chorizo. Manchego cheese is one of my favorite cheeses specially the kind that’s aged at least 12 months or longer. An order of paella is good for 2-3 people to share. The price was quite reasonable at P408 an order.

The rice was done just right and it was neither too soft or too hard. The flavor was good too but it needed some salt which I didn’t mind. It’s better than a dish being too salty.  I think reduced the salt because of the cheese but the cheese wasn’t that salty anyway.

What surprised me was the taste of the smokey chorizo. I couldn’t pinpoint the distinct spice I tasted but I was told it was a combination of different kinds of pimenton. The flavor had depth but again it could do with just a tad more salt. I was pleased that there was precious socarrat, the crispy toasted bits  on the pan.

Overall we liked Boqueria’s paella except that it was a bit too oily. Next time I’ll request them to put less oil.

I’ll definitely be back to try Boqueria’s other dishes and most specially their churros.