It’s rare that I get a chance to eat by myself in Hong Kong. Last December I found myself all alone and I knew right away where I wanted to eat.

I asked Jin where the best milk tea could be found in Hong Kong and she told me it’s at Tai Hing. Since she lived in Hong Kong for a while she should know.

So I took the #1 bus and got off Nelson St. and walked a block to Tai Hing. It was very near Langham Place.

I went there early because the first time I saw this branch there was a long line out the door.

I sat in one of the small tables below.

I was fascinated when a waiter opened a drawer underneath my table and took out my table setting. What a smart idea! I found myself opening it and getting more napkins, another fork and a toothpick.

I wonder what will happen if they do this in Manila. Will everything disappear?

The milk tea was good. The tea was nice and strong. I wish it were hotter though. It was barely warm. It tasted almost exactly like my favorite at Cafe de Coral. 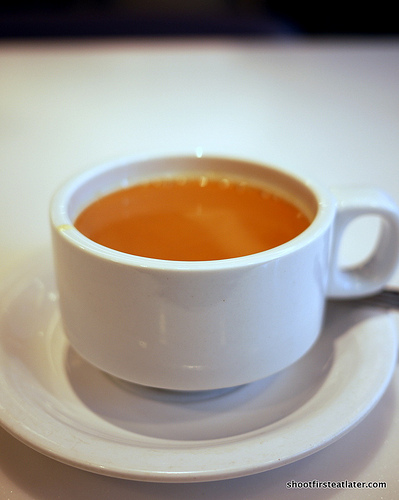 Maybe I should have ordered the chilled milk tea. Tai Hing is famous for this. They even won second place in the milk tea competition in Hong Kong.

I took this picture from the next table. The ice is on the outside so it won’t dilute the milk tea. Fantastic! 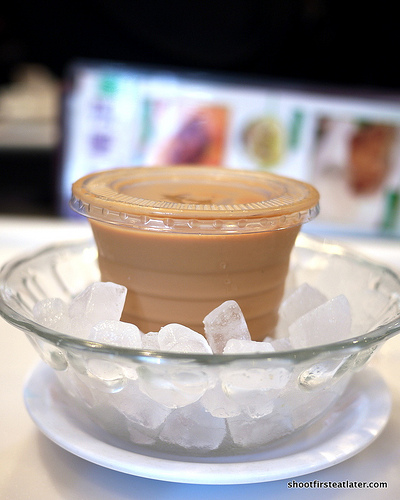 Tai Hing had a rather extensive menu and their specialties are roast meats. I wasn’t in the mood to eat roast meat and white rice. When I saw the picture of the noodles on the menu I immediately ordered it.

I love noodles and specially ho fan or flat rice noodles. The twist in this beef ho fan dish was the Swiss sauce. I had to find out what that tasted like.

The noodle were good and al dente. There was lots of tender beef. But what I didn’t really, really love was the sweet Swiss sauce. Traditionally beef ho fan was salty. This version was sweet and salty. It wasn’t that bad but it wasn’t my favorite.

The problem with eating alone was you can’t order much food. While waiting for my noodles I continued to read the menu and I saw my favorite fall/winter only dish – fried glutinous rice with preserved meats. I immediately ordered one for take out. 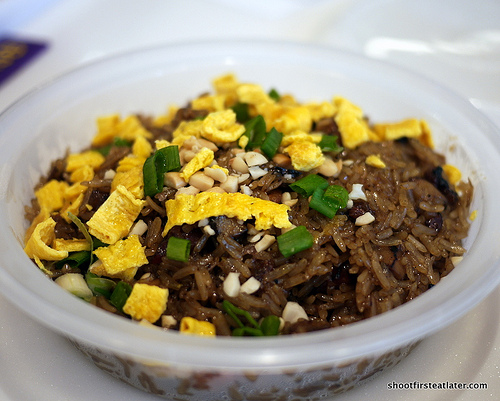 The rice arrived while I was half way into my noodles. I opened the lid and tried it while it was still hot. Oh my! It was fabulous! The rice was soft, sticky and filled with yummy preserved sausages and duck. It was so fragrant and not too greasy. I spooned some rice on my plate and transferred the rest of the noodles into the container.

I liked the rice so much better than the noodles. I had the leftovers for dinner and it was still as good. Ahhh a day of all carbs. I loved it! 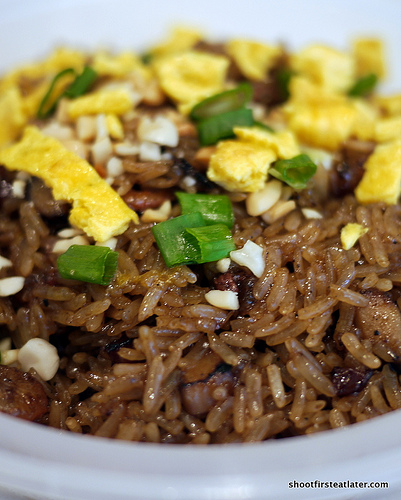 Here are some pictures I took of their specialties. 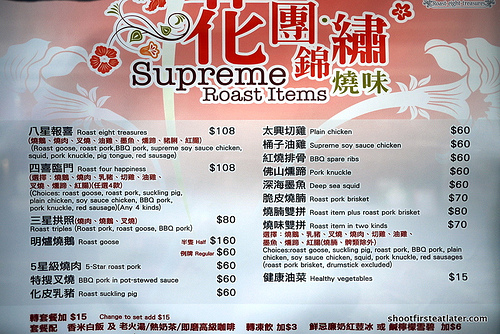 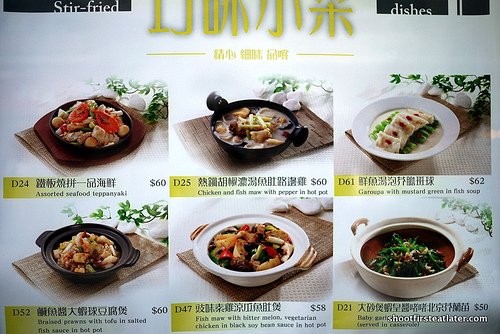