If you follow me on Facebook, Twitter or Instagram you would have seen several pictures I posted during my trip to Balesin Island Club last weekend. I took almost a thousand pictures during my 3 day stay at the island and I will try to show you in detail what paradise in the Philippines looks like.

I was incredibly lucky to have been invited by my friends Vivian and Jeffrey to go to Balesin. You need to be accompanied by a member to go to Balesin. Our trip started at a private departure lounge near the airport. 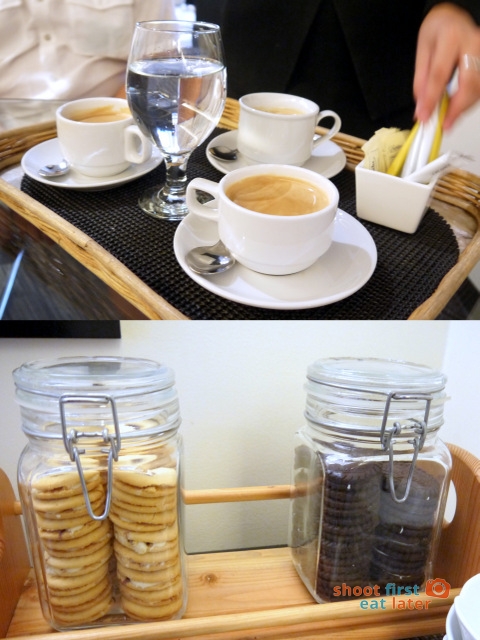 Alphaland, the owner of Balesin Island Club, has two 19-seater planes to ferry passengers from Manila to their island. But last Friday due to the large number of passengers they chartered a bigger plane that had a capacity for 94 passengers. If I’m not mistaken there were about 90 passengers that day.

The pre-departure procedure took more than an hour but the actual flight took only 15 minutes! After the flight attendants finished distributing bottled water the pilot announced that he was preparing the plane for landing. Quite a few of us snickered with that announcement. 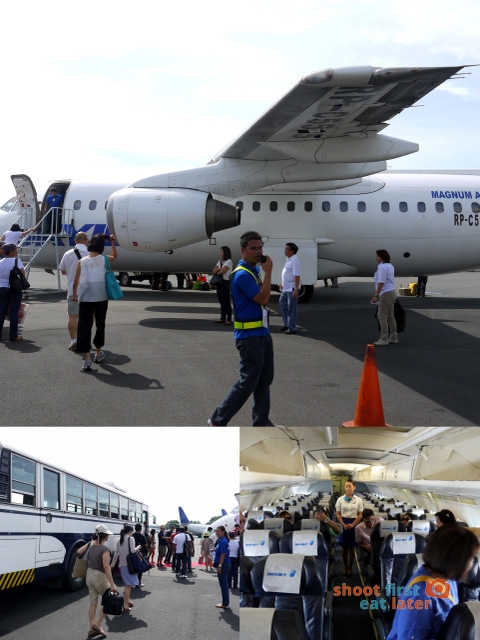 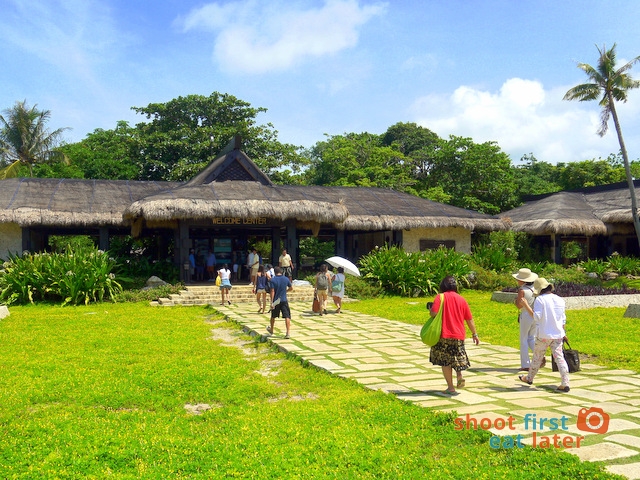 The main mode of transportation around the island was an electric golf buggy that was on call for 24 hours.

Balesin is a 500 hectare tropical island paradise with 7.3 kilometers of pristine white sand beaches. Located 21 kilometers southeast of Polillo, Quezon Province and just 60 nautical miles east of Manila, Balesin is a quick 25-minute plane ride from Manila, yet is a world completely unto itself. Alphaland Balesin Island Club is your unique, members-only, private leisure getaway-today and for generations to come. source

This is the main pavilion and it’s connected to the Balesin clubhouse and there are rooms located here. 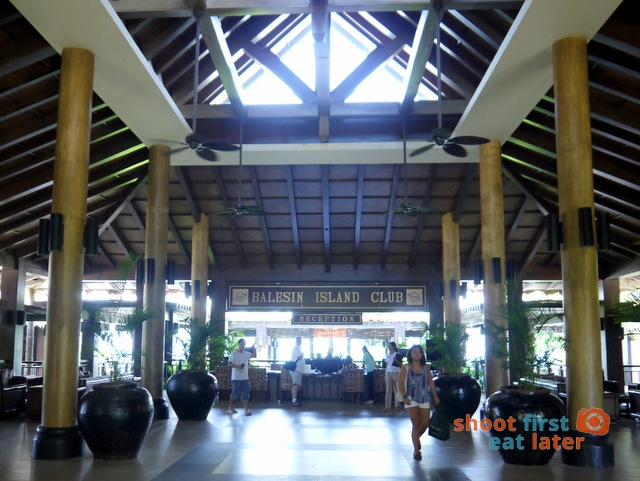 The resort has seven themed villages namely Balesin, Bali, St. Tropez, Toscana, Mykonos, Costa Del Sol, and Phuket. Each village has it’s own pool, villas and restaurants. I will feature each village in separate posts.

This is the gorgeous pool of Balesin (Philippines) village with Lamon bay behind it. 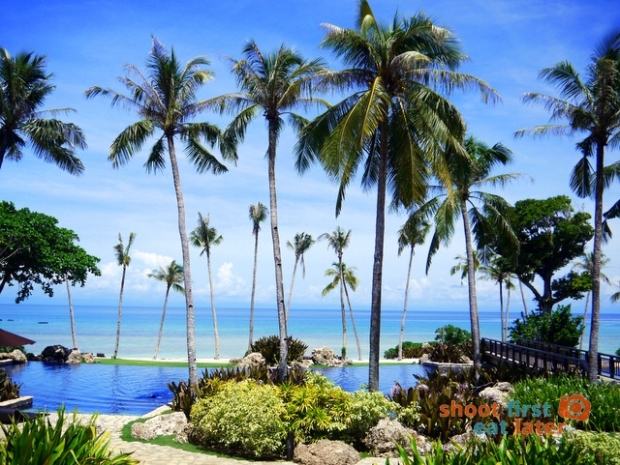 This pool was the biggest and longest among all villages. 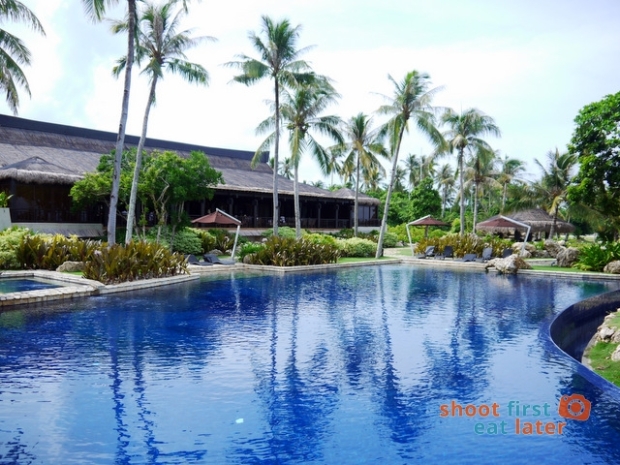 There were pockets of jacuzzi around the infinity pool. 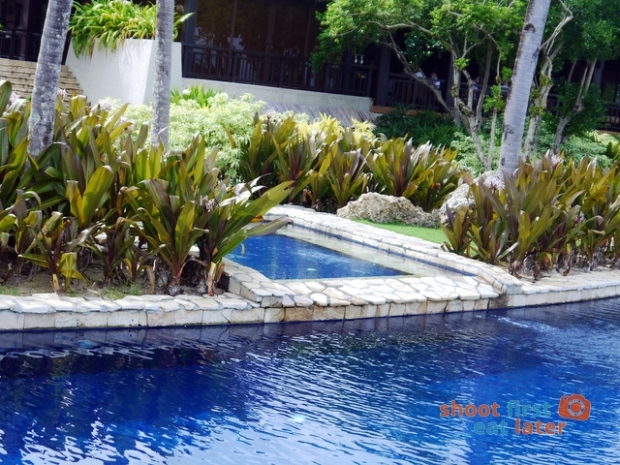 On our first night we stayed in Balesin Village. You can actually stay in a different village every night if you want. That’s what makes this resort very special. It’s like you’re having a vacation around the world.

Not all villas are right on the beach so you have to choose which one you want to stay in.

Initially we chose villa no. 12 which was right on the beach. This is the back of the villa.

From the huge daybed you get a direct view of the clear waters of Lamon bay.

Each villa has it’s own private whirlpool tub.

The villa measures 100 sq. meters or 1,076 sq. feet. There’s a king bed and a single bed on the side that will comfortably sleep up to four people. The room’s rate is P10,000 per night irregardless of the number of people. You can even request for an extra bed. All the rooms in the resort cost either P10,000 or 20,000. That’s why it’s no problem to move to another room in a different village. I feel this is really a fantastic deal considering all the luxurious amenities in the room and the resort.

Drink as much espresso and tea as you wish and it’s free.

The bathroom spanned the whole width of the room. It’s one of the nicest bathrooms I’ve ever seen in a hotel.

The bathroom amenities were placed in this really nice black lacquered box.

The water pressure was really strong and it felt like I was drowning when I used the rain showerhead.

Right outside the shower stall was a large outdoor shower. Isn’t that fantastic?

One of my favorite features in the bathroom was this wall of robe hooks. You can literally hang your entire wardrobe there. Have you ever seen a hotel bathroom with 10 robe hooks?

The housekeeping pantry was also located inside the bathroom. It was supposed to be locked but since the door was slightly opened I took a peek inside. No, I didn’t liberate anything from the cabinet. 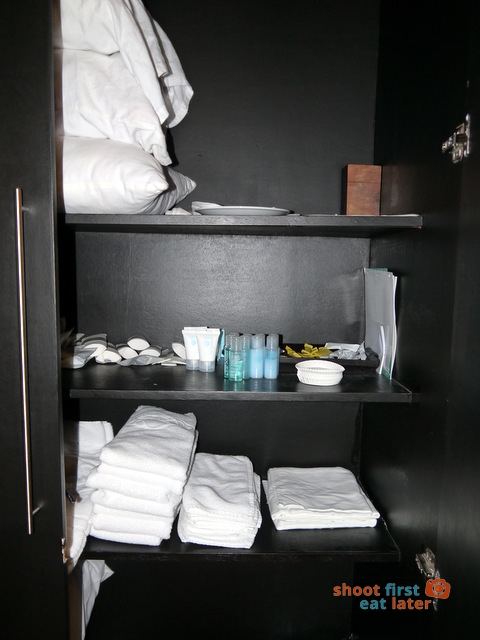 We later moved to villa no. 5 which had more privacy not that we saw any neighbors. This villa was about 10 meters from the beach so it wasn’t bad at all.

The villa was just a short walk to the clubhouse where we had breakfast. It’s also where the wifi signal was the strongest. There was no wifi access in the villas but I brought my pocket wifi with Smart Bro and it worked. It didn’t work in the other villages though. THERE IS NO GLOBE SIGNAL ON THE ISLAND. Only SMART has cell network in the entire island.

We were able to see a family room just off the main pavilion. 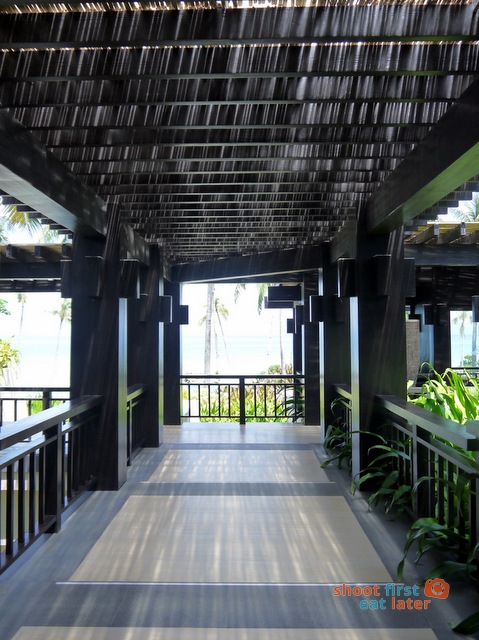 This 2 level clubhouse suite  costs P20,000 per night and sleeps up to 8 people. There were 4 single beds in the lower level and a king sized bed upstairs. They also had rooms with a reverse lay-out with the masters bedroom on the ground floor for older folks who don’t want to use the stairs. 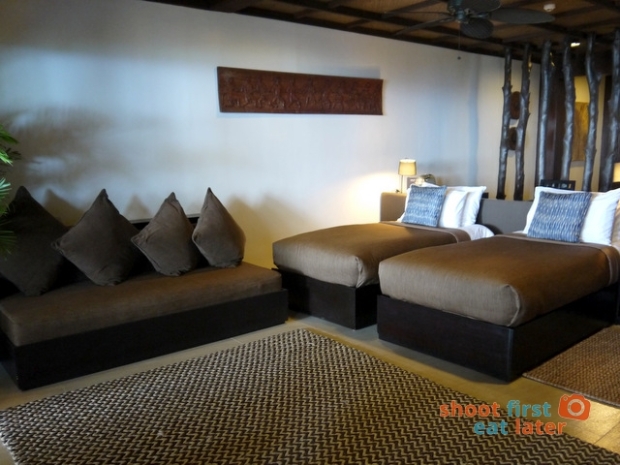 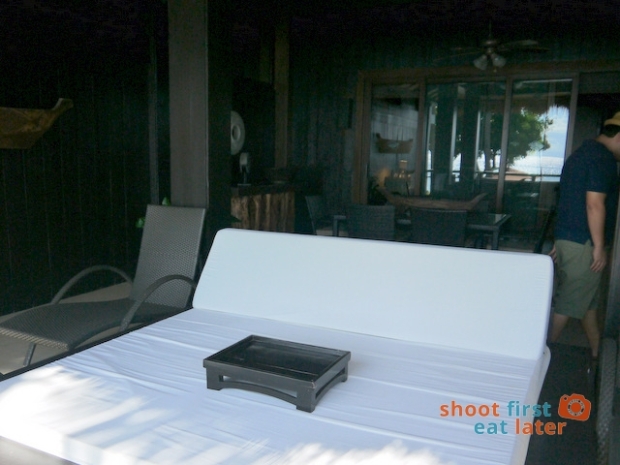 The room had a view of the pool and Lamon bay. Staying here is also very convenient since it’s only a few steps from the lobby where the strongest wifi signal was. The clubhouse, two restaurants, video game. table tennis, billiards and karaoke rooms were located at a lower level. There was also a salon, souvenir shop and a cigar room in the same building.

The master bedroom with a king sized bed was on the upper level.

There’s also this big function room perfect for private parties. I’m not sure if they also served meals during the day.

I woke up early on my second day and stepped out of the villa and saw some men exercising the horses. You can rent horses by the hour and ride up and down the beach.

We also discovered villa no. 3 which had a hut in front of it.

This hut had bug zappers and electric fans. I can just imagine hanging out with friends here and drinking wine or beer until the wee hours or maybe until sunrise.

Right after dropping our stuff in the villa we went to lunch and took a tour to see all the villages and the rooms. It took us four hours to finish the tour. Come back tomorrow for my post on the excellent meals we had in Balesin village.

Check out my other posts on Balesin Island Club.