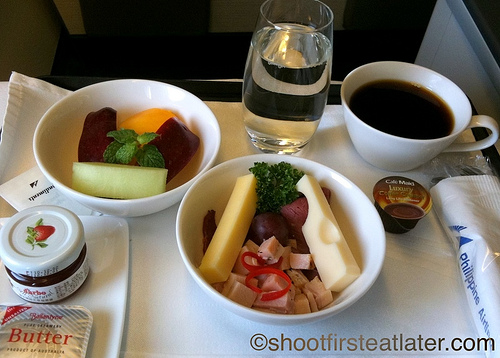 I’m saddened with the chaos that’s going on now with Philippine Airlines. I’m quite loyal with PAL since I’ve never had any bad experiences with the airline. Sure there are some delays but which airline doesn’t have it.

And yes I’ve experienced a long haul flight without any lights or video service and that’s on business class. Even with these boo-boos I still take PAL and I’m happy with them specially their food.

Last August I had to go to Hong Kong twice for immigration stuff. The first time I took business class and the second time I took economy. I was very satisfied and pleased with the meals on both classes. 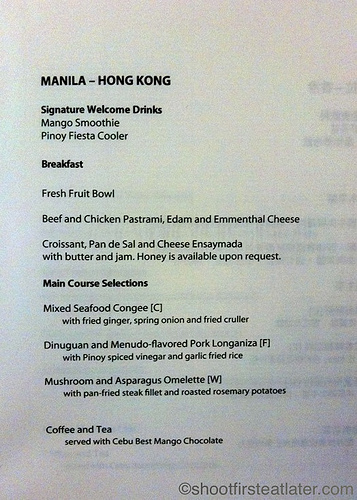 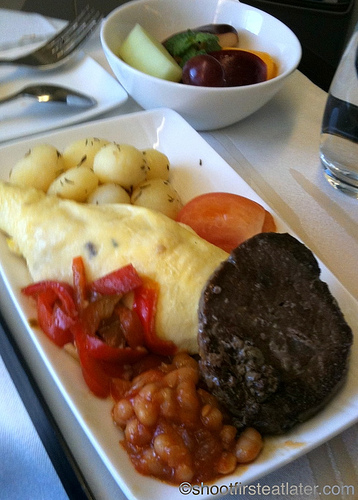 The omelet was soft and fluffy but I really don’t like eggs so I just ate the mushroom and asparagus filling. The steak was more done than I like it but it was more than edible. I also appreciated how lean and tasty it was.

I just ate the Cohen approved parts of the meal. 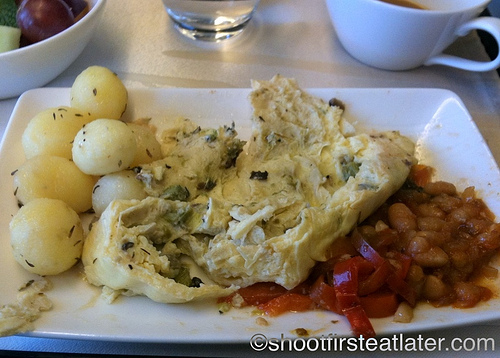 Another thing with taking PAL is the good service although sometimes I get annoyed with flight attendants talking too loudly in the galley. On my flight from Hong Kong to Manila,  I encountered extraordinary great service from one flight attendant. I regret not getting her name. She was ultra friendly and took time to open the blankets of the passengers instead of just handing it over.

She even strapped in my bag to keep it from falling down. She was simply unforgettable.

On the menu there is always a small treat that comes with coffee or tea but I almost never get offered it. I asked the friendly attendant why this time I was given the mango chocolate. She explained that if you take your tea or coffee with your meal you don’t get the extra sweets. But if you ask for coffee or tea after your tray is taken away then it is served to you automatically. Now I know the secret!

By the way the dried mango covered in dark chocolate was yummy! I never knew such a product existed. This would make a good gift to visitors to the Philippines.

The chicken tapa wasn’t what I expected. I was imagining something dry like beef tapa instead it had sauce and tasted a lot like adobo. I was so happy chicken breast was used and it was still tender. I found it a bit salty because I didn’t eat it with rice. It was quite good and appetizing. The chicken was mixed with lots of whole canned button mushroom.

Dinner on my flight back to Manila I chose the chicken with oyster sauce. It looked similar to the chicken tapa but the flavor was very different. The chicken breast was slightly overcooked but it wasn’t bad at all. Very satisfactory indeed. 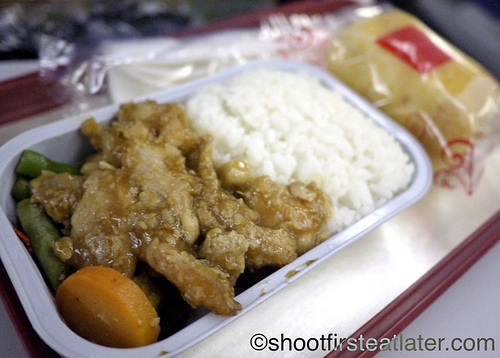 It’s a good thing both meals came with packaged dessert which I was able to take with me and I gave it away.