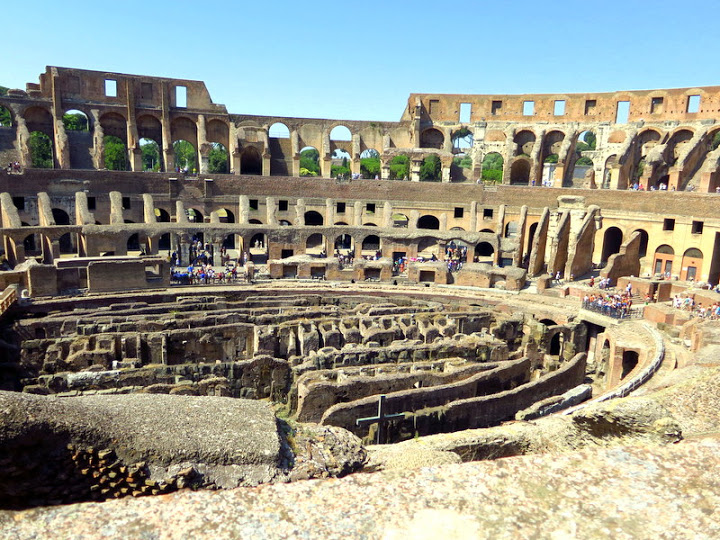 The Colosseum is one of the most popular sights to see in Rome and one that shouldn’t me missed. We bought our tickets for a guided tour which I highly recommend from Tickitaly.

From B&B San Pietro alle Fornaci we rode the public bus to a stop near the Colosseum. We had to walk a few minutes but the sights along the way were quite entertaining. Authentic looking costumes except for the cellphone.

walking along Via Cavour

If we only had time Rochelle and I wanted to see the Dali exhibit.

We got a close look at the Roman Forum with the ruins from ancient government buildings.

Here’s my first look at the amazing Colosseum. There will be several people who will approach you offering guided tours. Avoid those. It’s best to book online from reputable sources.

This amphitheater was built 1920 years ago as a venue for entertainment for the Romans. All kinds of games were held there as well as chariot battles, hunting of wild animals and eventually gladiator battles. Read more about it here.

We just presented our printed tickets to this counter.

Our tour guide spoke into a small walkie talkie and everyone else had the same unit tuned in to the same channel. Low tech yet quite effective. The picture on the right was how Rochelle and Sharon wore their walkie talkies. Our tour lasted about 45 minutes and it was very educational and well worth it. We learned so much about the history of the Colosseum.

The Colosseum was used to host gladiatorial shows as well as a variety of other events. The shows, called munera, were always given by private individuals rather than the state. They had a strong religious element but were also demonstrations of power and family prestige, and were immensely popular with the population.

Another popular type of show was the animal hunt, or venatio. This utilized a great variety of wild beasts, mainly imported from Africa and the Middle East, and included creatures such as rhinoceros, hippopotamuses, elephants, giraffes, aurochs, wisents, Barbary lions, panthers, leopards, bears, Caspian tigers, crocodiles and ostriches. Battles and hunts were often staged amid elaborate sets with movable trees and buildings. Such events were occasionally on a huge scale; Trajan is said to have celebrated his victories in Dacia in 107 with contests involving 11,000 animals and 10,000 gladiators over the course of 123 days. source

When I look at this all I can think of is Russel Crowe and the lions from the movie Gladiator. This is the hypogeum where the gladiators and animals were kept before a game.

This is where the audience sat.

We even got to go to the lower level for a closer view.

This was a part of the original flooring of the Colosseum.

An advantage to a guided tour was we got access to some areas prohibited to others. Our tour guide had to unlock this gate.

From the upper level we had good views of nearby attractions like the Arch of Constantine, Palatine Hill and Roman Forum.

Our entrance ticket actually included the Palatine Hill and Roman Forum but we decided not to go there anymore since it was too hot. We were in Rome in June which was summer time.

Even though we look dorky with these touristy hats they were invaluable. Don’t forget to bring hats when you travel in the summer. It’s a big help with the heat and the UV rays.

These two were proud to have umbrellas to protect them against the sun.

I wish we took the Segway tour in Rome like we did in Paris. Next time!!!

5 thoughts on “Rome: The Colosseum”