Last June the Singapore Tourism Board sent me and two other Filipino journalists to attend the World Street Food Congress 2013 in Singapore. It was two days of intense and informative discussions from renowned international speakers like TV host Anthony Bourdain and James Oseland, editor-in-chief Saveur magazine among others.

The event was organized by KF Seetoh, known as Singapore’s food ambassador. If he seems familiar to you I’m sure you’ve seen him in his numerous appearances on Anthony Bourdain’s tv shows as well as other food shows. He is very passionate about preserving and professionalizing the heritage of street food in Singapore and around the world.

I was very impressed with all the speakers from different countries like India, China, Thailand, Singapore, Indonesia, Denmark and the USA as they shared their countries’ street food culture as well as the problems they face like regulation and sanitation among other issues.

It made me think about about our own street food which definitely has no regulation at all. Nevertheless I believe our food has it’s place in street food culture and the world needs to know about it. Slowly Filipino food is being introduced in food trucks in the US with popular vendors like Señor Sisig, The Manila Machine, Hapa SF and several others. I couldn’t help but ask Seetoh why the Philippines wasn’t included in the Congress. He promised next year we will be represented.

After a whole day of listening to impassioned speakers talk about street food I was ready and eager to try the real thing. There were 37 stalls from 10 countries selling street food and I didn’t know how to try it all.

Alya, lifestyle writer for the Philippine Daily Inquirer, and Monique, deputy editor of Leisure + Adventure Travel magazine, and I had S$20 worth of coupons each and we devised a plan of divide, conquer and attack  as much food as our tummies can handle.

We needed two tables for all our food! Monique and Alya don’t eat meat so they chose food I wouldn’t normally select and it opened my palate to new food and flavors that I’ve been missing all this time.

In his speech Anthony Bourdain mentioned that Seetoh did an incredible job of bringing Mexico’s La Guerrerense to Singapore since it’s the one street food he would gladly fly from New York to Mexico for a meal. Hearing that I decided that their food would be my first purchase. Since each dish in their stall cost S$10 it also became my only food purchases. I hoped the two girls did better with their coupons or else we would go hungry.

Maybe because my expectations, after hearing Mr. Bourdain’s declaration, were sky high I was underwhelmed by the food specially the campechana (seafood cocktail) which had a very bland and almost watery sauce. I was expecting something with more acidity. I guess the girls felt the same since we didn’t even finish the small cup of seafood.

Alya has been to India numerous times and she shared with us her favorite dishes which I’ve never tried before. The bhelpuri was a shocking explosion of tangy, sweet and spicy flavors paired with all sorts of crunchy and squishy bits which I didn’t bother to identify. All I know was it was an amplified experience after the Mexican treats. I never thought the day will come that I will prefer an Indian dish to a Mexican dish.

The batata puri had similar flavors to the bhelpuri but included fried potatoes. 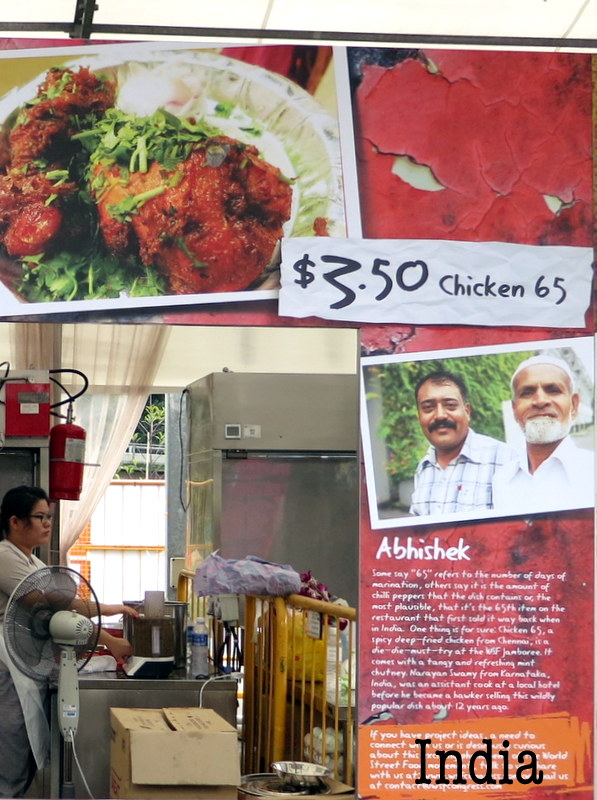 Thankfully Monique ate chicken too and she bought this spicy fried chicken that originated in Chennai, India. The chicken is called 65 which some say refer to the number of days of marination while others claim it’s the number of chili peppers used whatever it is the chicken was full flavored  all the way to the bones and it had very crispy skin. All that was lacking was a mug of ice cold beer.

The Swamp Shack was one of three food trucks from Portland, Oregon at the Jamboree. The shrimp and grits were as Southern as you can get and their execution was well done. The crispy nuggets of shrimp on a bed of soft and creamy grits were a nice change of flavors from the spicy Indian food. 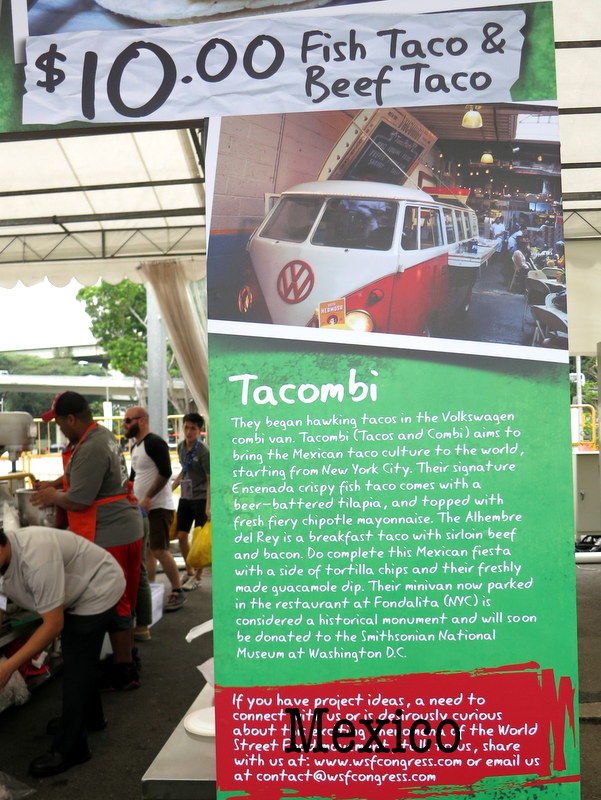 Tacombi started selling tacos from a Volkswagen combi van in New York thus the name. Their fish taco made with battered tilapia and pickled red cabbage and chipotle mayonnaise was one of my favorites. If I didn’t have to try other dishes I would have eaten both beauties in a flash. 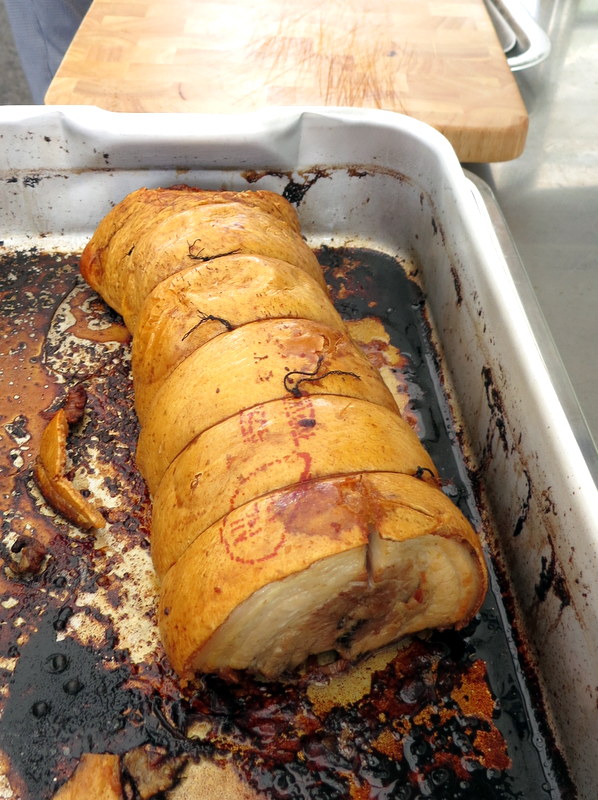 I’ve encountered the porchetta sandwich in San Francisco but I’ve never tried it. I’m glad my first taste was The People’s Pig’s heavenly melt-in-your-mouth version complete with extra pork skin. Since I was the only pork eater in the group this sandwich was all mine.  I wanted to do the happy dance as soon as I bit into the soft bun and my teeth encountered the tender and juicy fragrant pork with just enough fat to help it all glide down my throat. This was one seriously good pork sandwich. 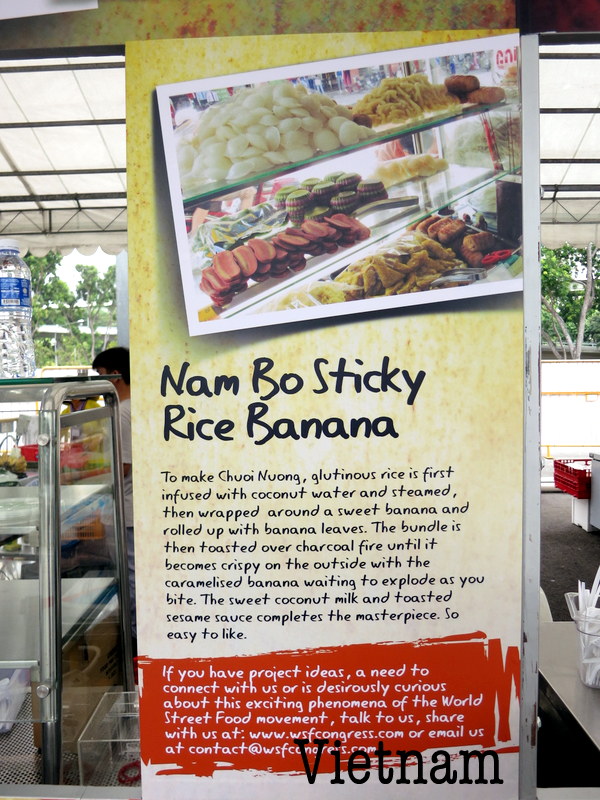 We had a few coupon dollars left so I decided to buy a banana wrapped in a sticky mixture made from glutinous rice and toasted on a grill until crispy. It had a sweet sauce made with coconut milk and a sprinkling of toasted sesame seeds. Not bad at all but it made me think of our simple banana cue which I liked more and it made me wonder how that would fare in a venue like the Jamboree. 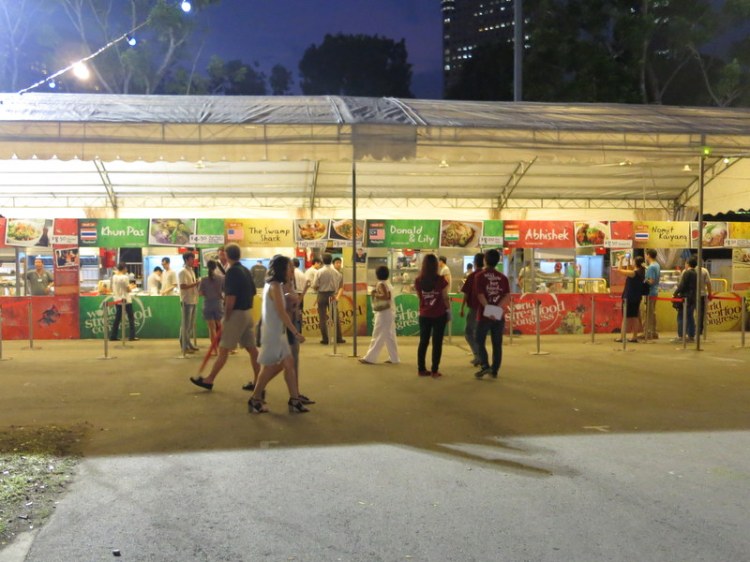 The venue for the Jamboree was next door to the famous Singapore Flyer. 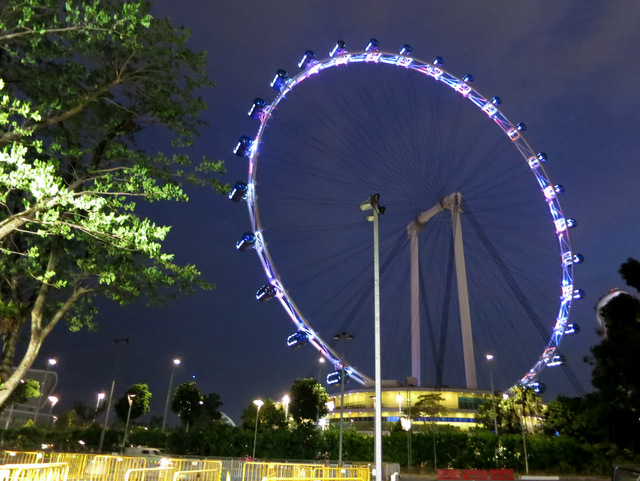 On the second day we continued sampling more delicious street food for lunch.

I love oyster cake or omelet but this seafood version Alya got from the Thai stall beat any I’ve tried before. The egg mixture had the perfect mix of doughy and crispy texture and the fresh seafood was plentiful. I never knew there was an equivalent dish in Thai cuisine. Now I have a new favorite Thai dish to add to my usual repertoire, talay tord.

I found it amusing that Monique bought Wee Nam Kee’s chicken rice since we have it in Manila but she said she wanted to compare the taste. It made sense specially when I tried the chicken rice which was more moist and more flavorful than the Manila version. 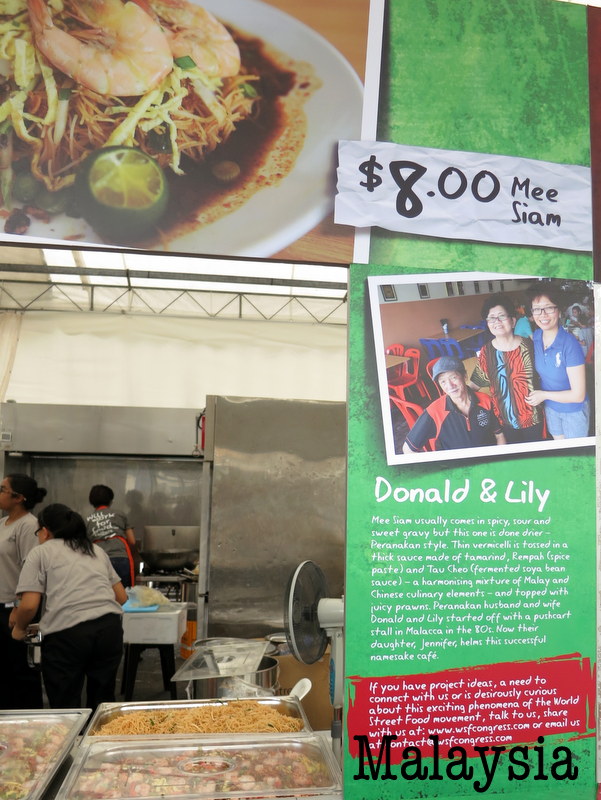 My all-time favorite Singaporean/Malaysian dish is char kwey teow and that’s the only noodle dish that I buy. Alya introduced me to a new favorite called mee siam. It’s made with vermicelli (bihon) noodles and mixed with a tangy sauce made with tamarind and other spices. I hope the next time I eat mee siam it will be as good as Donald & Lily’s version. 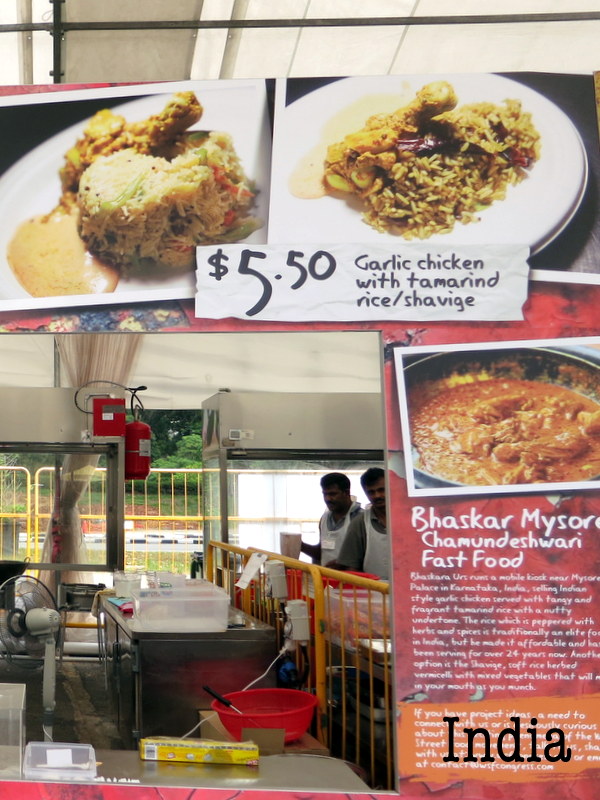 Monique got this garlic chicken with tamarind rice from the Indian stall. I was really surprised with all the unfamiliar Indian food we’ve been trying. It definitely expanded my knowledge of Indian food which used to be limited to just curry, biryani and chicken masala. 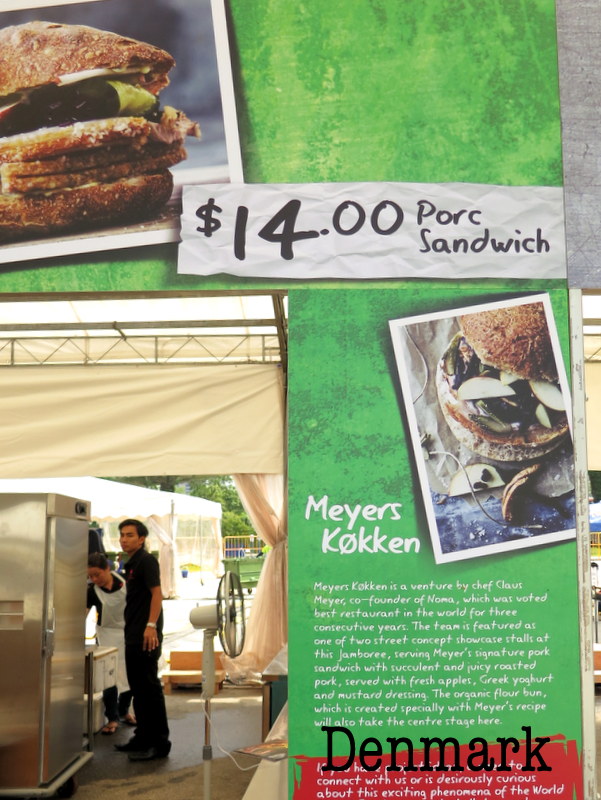 Next to Anthony Bourdain my favorite speaker at the Congress was Claus Meyer specially after he showed us this video.  Please take a few minutes to watch this and you will see how passionate he is about bread and food.

I had my picture taken with Claus Meyer, the co-founder of Noma, a restaurant in Denmark  that’s on my bucket list since it’s rated the number one restaurant in the world for three years running until it was downgraded to number two this year. 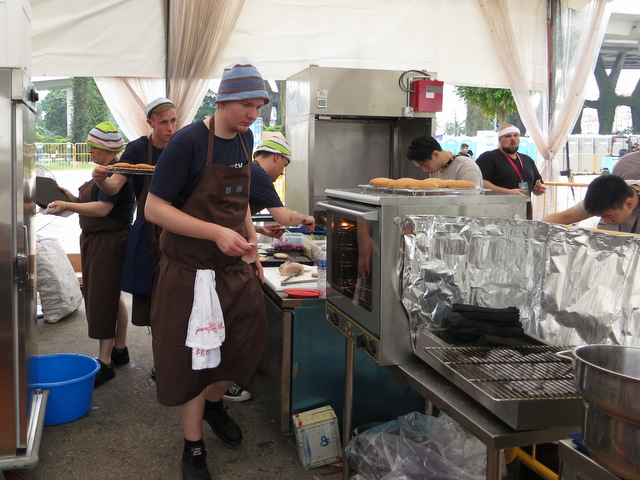 I was most excited to try Claus Meyer’s porc sandwich since it was the closest I could get to having the Noma experience. The picture looks wonderful doesn’t it? Slices of roast pork topped with red cabbage, gherkins, sliced apples, mayonnaise based dressing in their special bun. I really had high expectations.

The first bite was wonderful as I bit into the crusty bread and cruchy pork skin and tasted a myriad of sweet and sour flavors. Alas my joy didn’t last when the bread became soggy and tough and the tasty pork skin was gone. The pork was quite tough and, honestly, bland specially when compared to the porchetta sandwich. Sorry Papa Claus I really did want to like your sandwich. He did say that he had some problems having the bread made in Singapore since the bakers didn’t believe his recipe and methods.

Overall I really learned a lot at the World Street Food Congress 2013 and enjoyed the food even more. So what did I get out of the two day event? I will let Claus Meyer’s words sum it all up, “If fine dining is dialogue and foreplay then street food is sex.”

What Philippine street food do you think we should send to Singapore next year if we get invited? Let me know in the comments section below.