When Rochelle and I went to Paris a couple of years ago one of the simple meals we enjoyed was from Paul in the basement of the Louvre. We shared a long baguette filled with tuna salad, a flan normand and an Orangina soda. It wasn’t fancy but it left an impression on us and a longing for good baguette in Manila.

It was only natural that I try out Paul in SM Aura with Rochelle so we can reminisce on our trip and all the goodies we ate. If I blocked out all the chatter and ignore the heat I can imagine I was in a French patisserie sans the sidewalk seating. 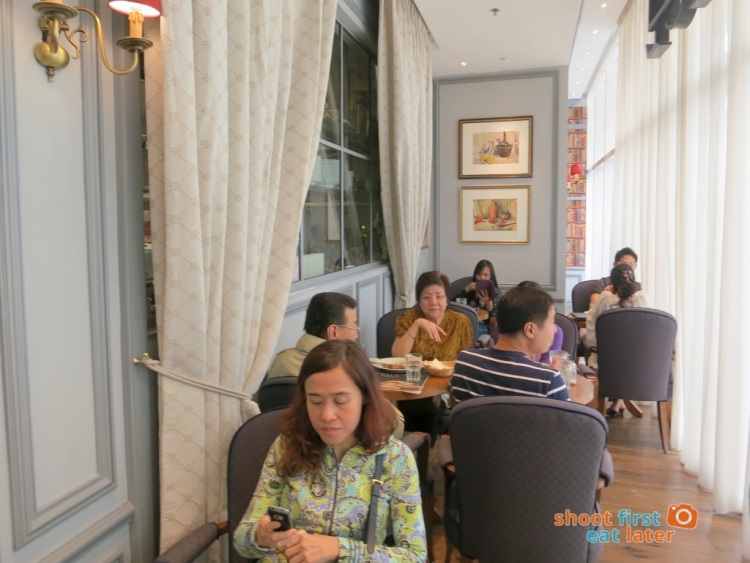 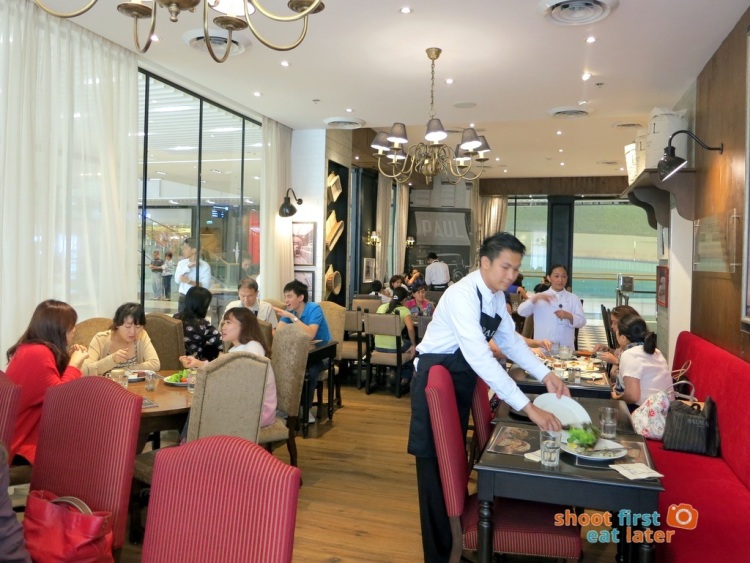 Rochelle and I went for a late lunch so we were quite hungry and ordered a lot of food mostly sweets.

This ham and cheese baguette wasn’t in the menu. It was in the pastry display for take out. I had it warmed but thirty seconds in the oven didn’t do anything to the sandwich. It was still cold inside and out. Despite that the baguette was just as crunchy as the one we had in Paris. I can’t fault the thick slices of cheese and generous ham either. I just wish there was butter or Dijon mustard slathered on the bread to make it less dry. This sandwich is a great option if you want a meal on the go or even to eat while watching a movie.

Filled with almond cream and dark chocolate this croissant was both chewy and flaky and a delight to eat. I loved it!!! 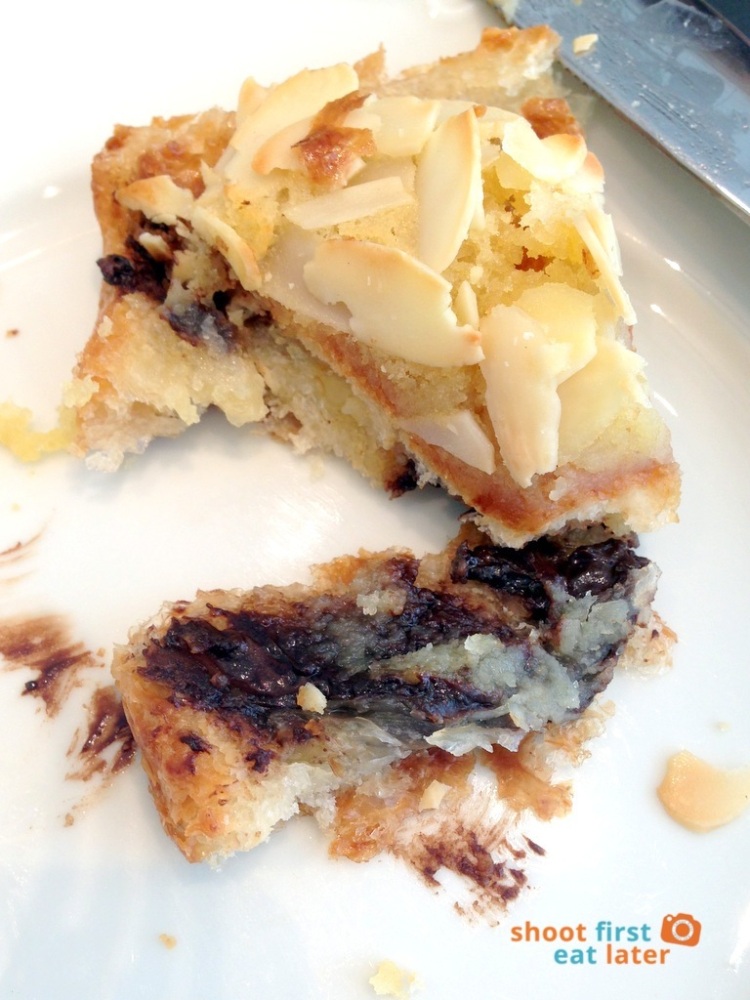 I followed Jin’s tip of ordering a pan muesli and had half of the small loaf sliced and served. We took home the other half. This bread was stuffed with dried apricots, sultanas and hazelnuts. When I posted the picture on top on Instagram Jin immediately sent me a message with a picture of the same bread she had when Paul just opened. You can see that her bread had lots more fruit and nuts. I really didn’t mind since I like the current ratio of bread and fruit and nuts. I just wish they lowered the price to match the decrease of ingredients. 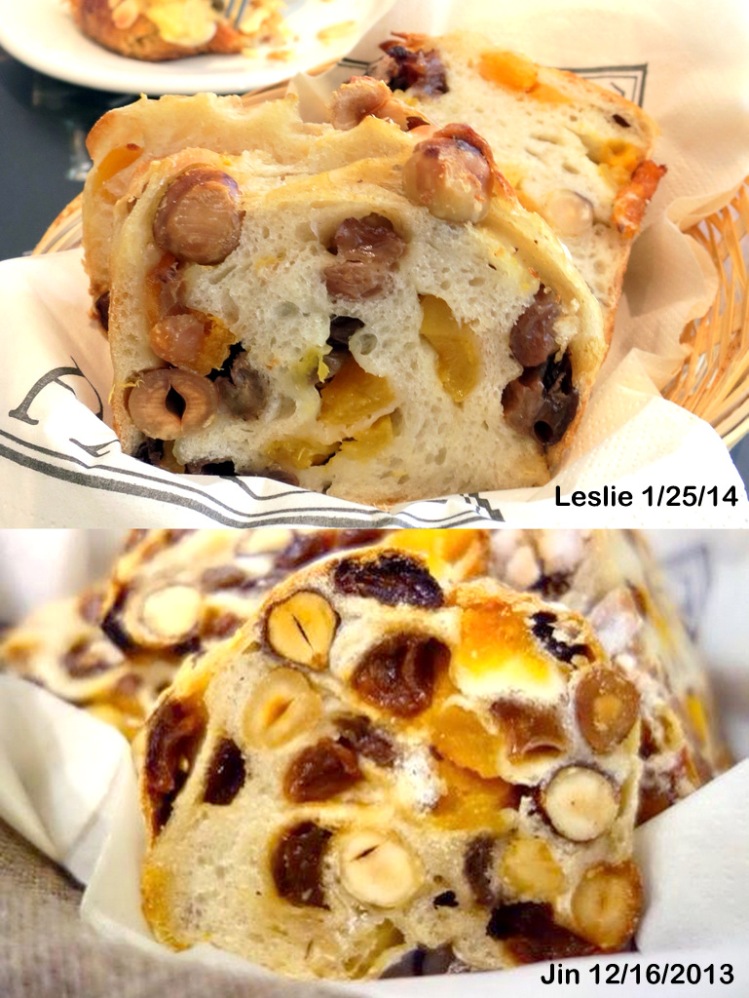 Our small table groaned under the weight of all our food! I had to put all the dessert on one plate to give us more elbow room. 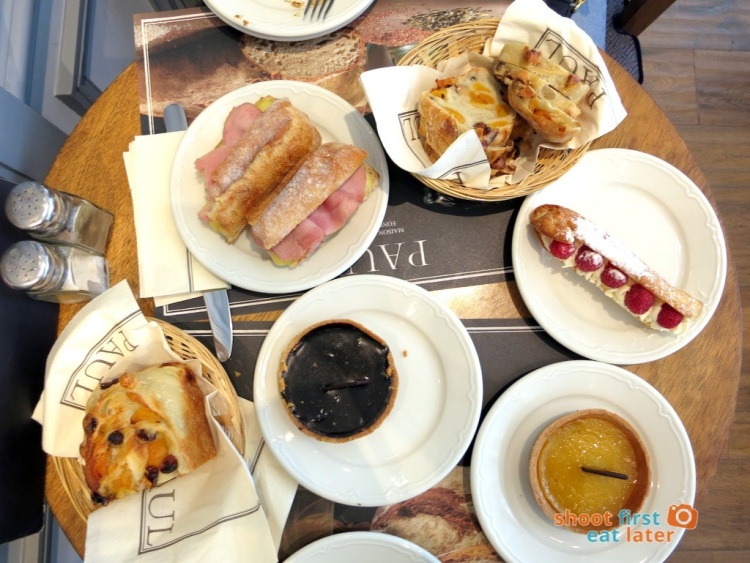 Rochelle loves whipped cream so the raspberry eclair was all hers. She loved it but commented that the choux pastry was just a tad dry.

I always complain that the lemon desserts that I’ve tried in Manila often lack sourness. Some don’t even have any lemon flavor. Well Paul’s lemon tart will make you do the ‘mukhasim face’ with its serious tartness. Our biggest complain with the two tarts were the horribly soggy crust. Imagine baking the crust then spraying them with a mist of water. That’s what the crusts tasted like.

The wonderful rich dark chocolate filling couldn’t save the crust. I asked one of the kitchen staff to try it and let me know if that was their standard crust. If it was then I wouldn’t complain. She took a piece to let the head kitchen honcho try it and she came back and admitted it was subpar and deducted both tarts from our bill. Too bad since I was hoping to relive the delicious decadent chocolate tart I had at Seco Patisserie in Paris.

Rochelle barely weighs 100 lbs. so I don’t know where she put half a ham & cheese baguette, half a croissant, a whole eclair and  an order of mushroom soup. But she polished off the earthy and gritty fresh mushroom soup which was a steal at P95 a bowl.

I had a cup of strong Lavazza coffee. 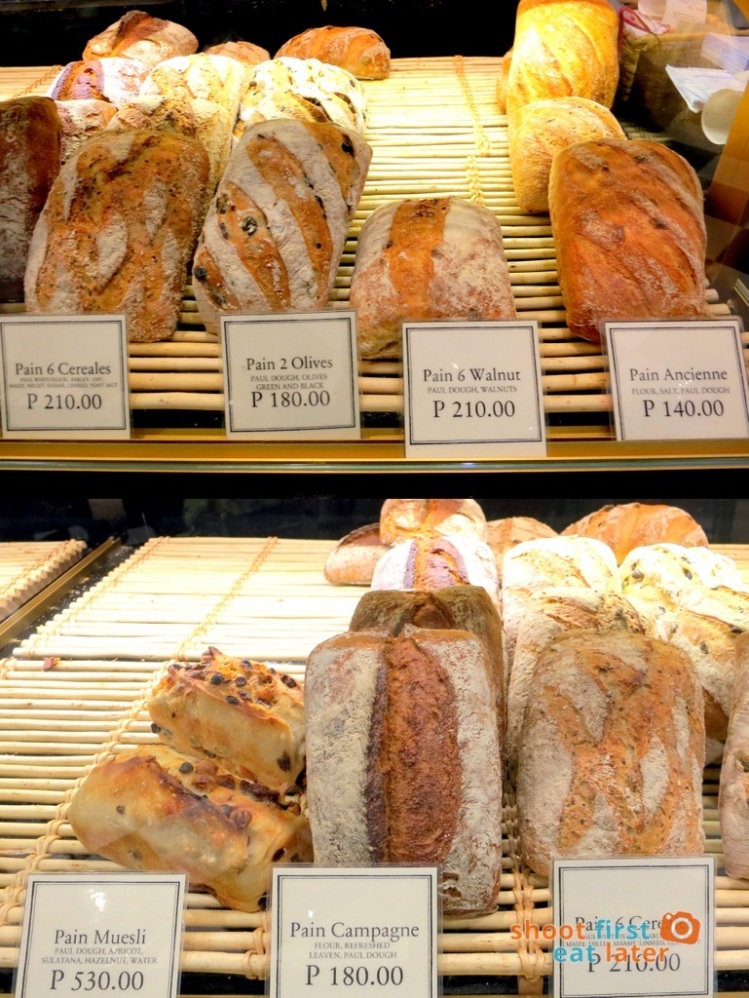 I was able to try the benoiton au chocolat on another day and it was surprisingly good. The bread was a cross between a crusty and soft bread which was yummy when toasted. 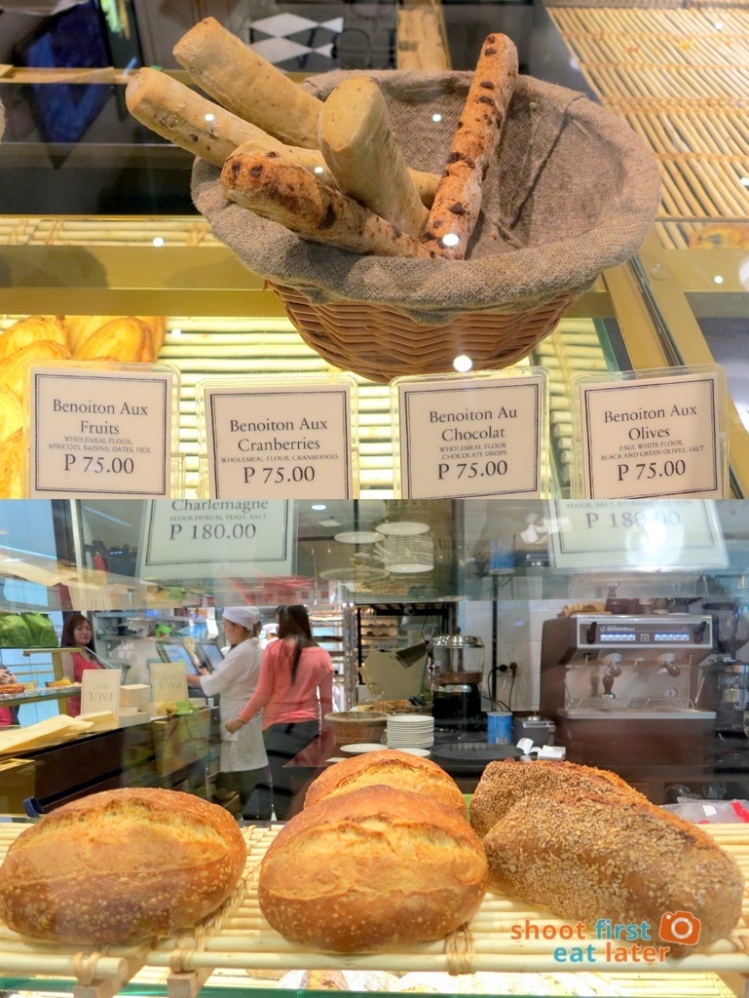 I wanted to buy more almond chocolate croissant to take home but they were all gone. 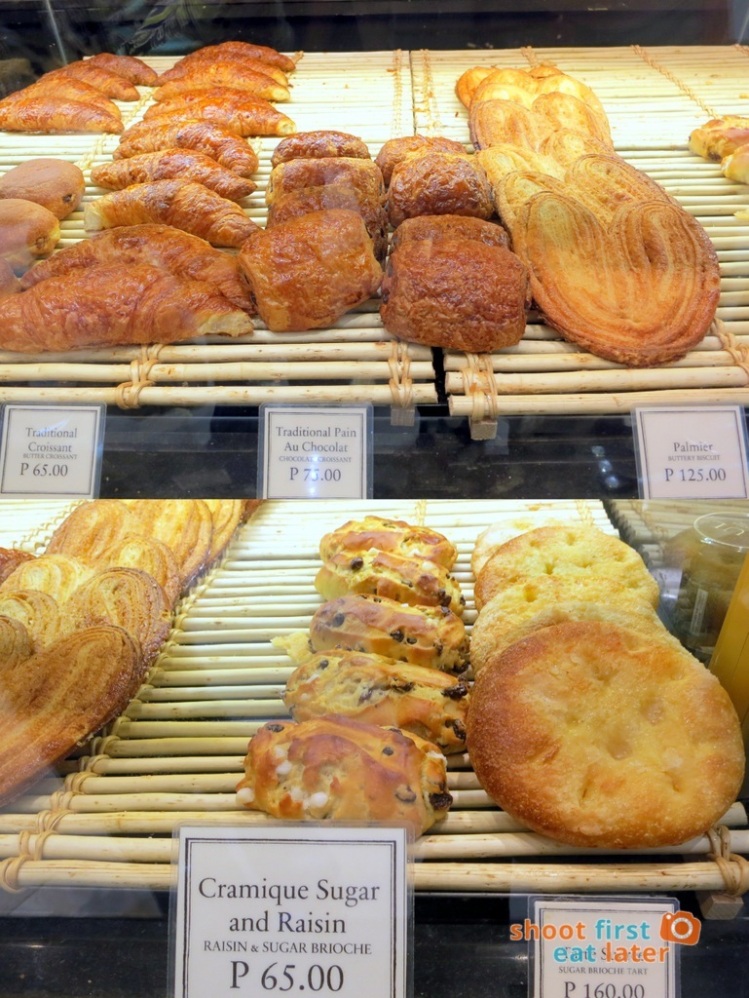 They did brisk business and don’t have time to make sure the signs matched the pastries. 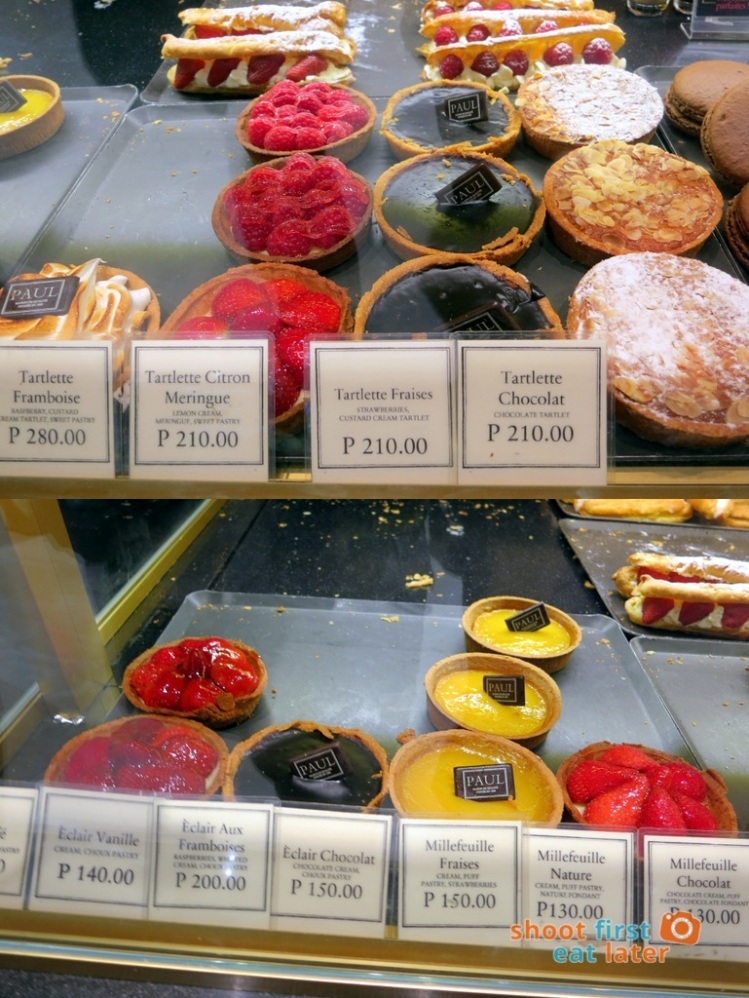 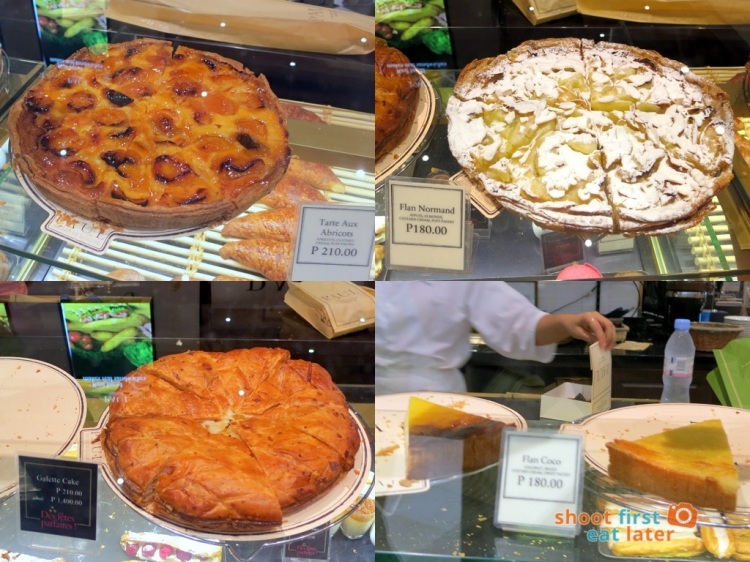 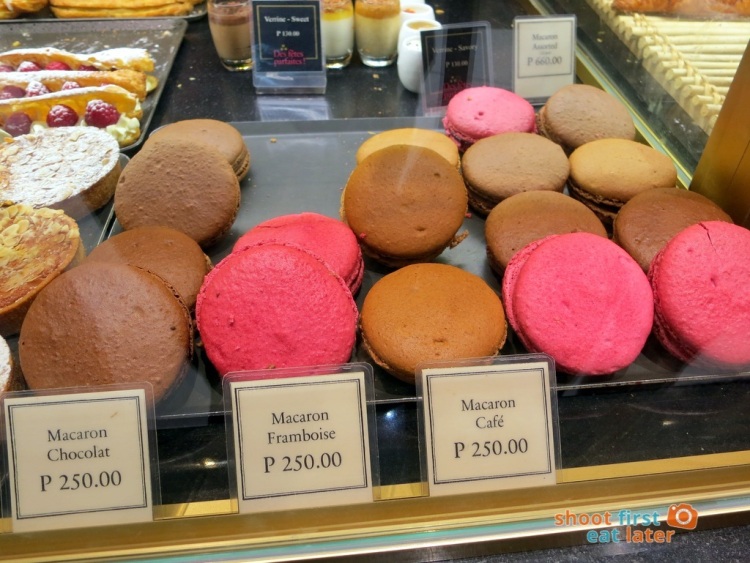 I took home a slice of flan normand and didn’t realize it was the same dessert I had in Paris. I ate it cold from the refrigerator that’s why the crust wasn’t crisp or flaky and almost impossible to cut with a fork. I did have fun eating it with my hands. The super tart apple slices were soft and mushy almost like chunky applesauce which I normally hate but somehow it mixed well with the sweet custard and almond slices. If they can use a firmer and sweeter variety of apple like the one I had in Paris then this dessert would be a winner.

My second visit to Paul was last Thursday after lunch at Sarsa. We all ordered a different dessert so we could try more varieties and decide which ones we liked best.

We all unanimously liked the cold, creamy, rich but not too thick crème brûlée with a perfect layer of torched sugar for the crisp caramel topping. The container was a good size and all five of us got to eat at least two spoonfuls each.

Elisa loved her mille-feuille or napoleon with layers of puff pastry, pastry cream and sliced strawberries.

Never would I have ordered the coco flan but it was Deb’s favorite in Paul so I tried it and was pleasantly surprised at the light texture of the flan with bits of desiccated coconut. Think of it as a really good egg pie that collided with a coconut macaroon (not macaron).

It took young Martin a while to decide since he was shocked at the prices. I assured him I was treating and he can order anything his tummy desired so he chose the strawberry eclair which his mom, Deb, declared as the best dessert choice that afternoon.

It also took me a while to decide not because I was paying but because I was choosing from the lemon raspberry cake, apricot tart or red berry tart. At the last minute I chose the moelleux chocolat, French for smooth chocolate cake because the waiter said many people ordered it. Before I took a picture I asked the waiter if the cake was upside down. He assured me it wasn’t. Well upside down or right side up it wasn’t as good as it looked. It was  just a simple chocolate cake which was neither rich, decadent or moist although it wasn’t dry either. A good drizzle of salted caramel, chocolate ganache or both would have improved it.

I eventually flipped the cake. So what do you think? Upside down or right side up? Whatever. 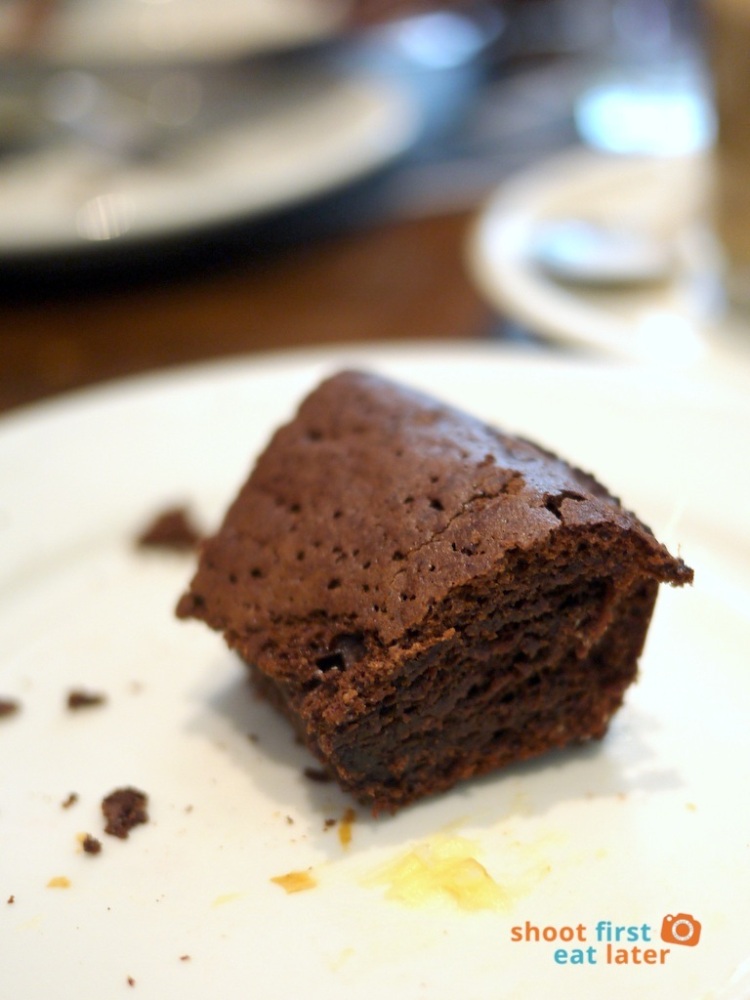 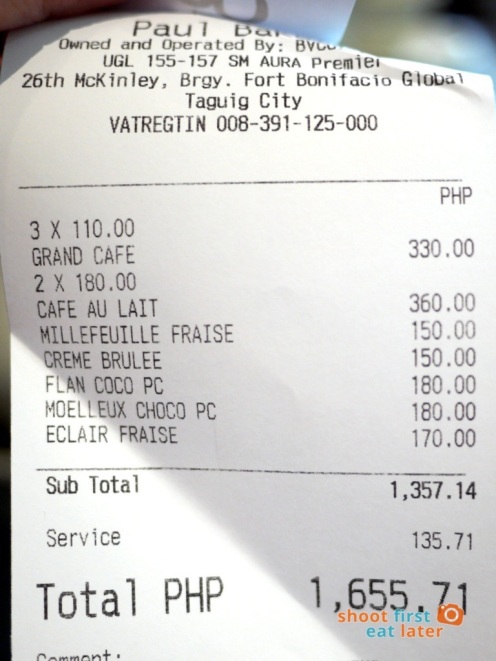 I would go back for the cold sandwiches as well as several hot sandwiches I saw on the menu. I would love to buy the almond chocolate croissant again and maybe a couple of the benoiton to go. What are your favorites at Paul?