I don’t know why it took so long for me to eat at Calderon when it’s so near where I live. It took Rochelle’s post birthday celebration for me to finally know what I’ve been missing.

Calderon is on a small street (Calderon St.) just off J. Abad Santos in San Juan. Its neighbors are La Creperie, Piandre and The Nail Loft.  There is very limited parking since it’s still a semi-residential street. I suggest you carpool or go early. 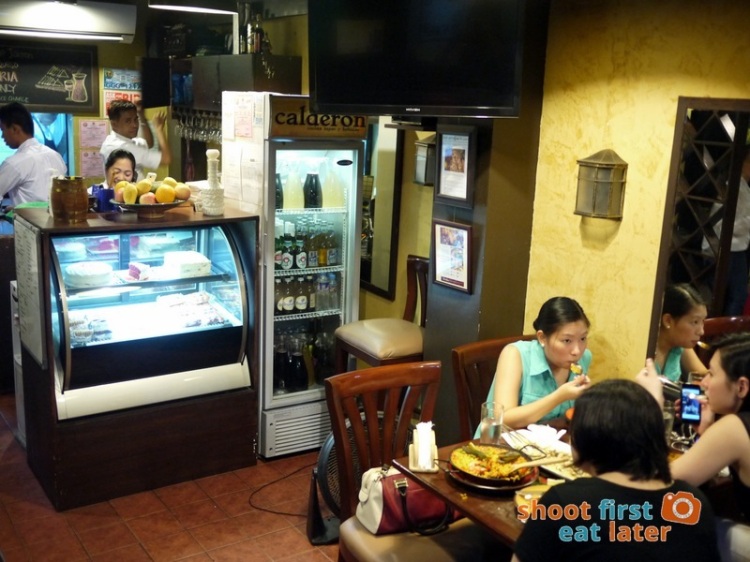 This is Calderon’s Chef Rafa Ysip. I’ve known him since he was a young boy since his aunt is a good friend of mine from college. He promised me that our dinner was going to be extra good and he kept his promise!

The Chorizo Fritos P300 was a bit salty but it was lean so I was satisfied with it.

The beef cubes were quite tender but again on the salty side and it tasted like Knorr seasoning.

The Fabada Asturiana P300 or Spanish bean stew was the saltiest of all. We had to add hot water to the soup. Rochelle loves fabada and she said this wasn’t as good as others she has tried.

The Callos P320 was just ok according to my friends since I don’t eat tripe.

The good food starts here. I can’t take a nice picture of the Cangrejos de Calderon (baked crab) P1,300 since it looked like a mess but it was one tasty mess. Normally we just steam crab at home so crab baked with olive oil, tarragon, lots of garlic and lemon juice was like a shock to my taste buds.

The crab was just skinny. My friends were trying to explain to me why the large crab claw contained shrunken meat but I zoned out since I was busy eating.

Another house specialty was the Pollo Iberico P880 that you had to order a day in advance since they marinate the chicken for 24 hours before baking it. It was simply seasoned with garlic, herbs, lemon juice and olive oil and baked slowly. The chicken was amazingly tender that only a slight nudge with a fork and the meat fell apart. The flavors were sublime too. One chicken was good for 7 of us.

I literally stopped eating the Paella Negra (small) P680 midway and looked at Rochelle while pointing frantically at the paella. It was almost as good as the best paella we’ve ever had in Barcelona. I was really speechless at how good it was. The rice was cooked to the right softness without being too mushy. The flavor of the rice was intense and adding a little bit of aioli just put it over the top. This is currently my favorite paella in Manila.

The Paella Valenciana (small) P780 was quite delicious too but I was stuck on the paella negra. If you eat at Calderon I suggest you eat this paella first before trying the negra. Because once you eat the negra you won’t go back. Well, that’s my opinion.

Stick to the paella, pollo Iberico and crab. They’re the most expensive dishes and also the best. Don’t forget to order your chicken one day before. We ordered 2 small paellas for 7 and had leftover paella Valenciana but we finished almost everything else. I’m definitely going back for more paella negra!!!

They’re opening a second branch in Kapitolyo by the end of July. The new restaurant is aptly called Calderon Dos. Watch out for it!! 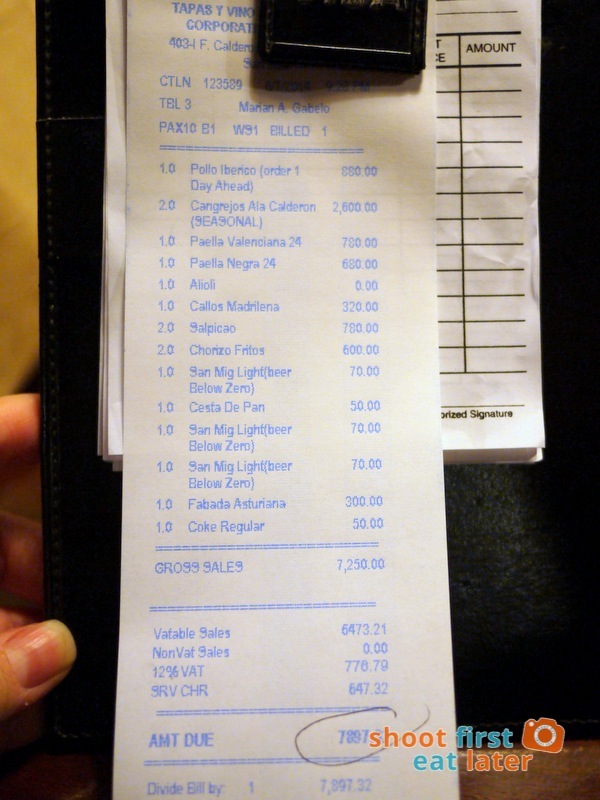 One thought on “Paella at Calderon”