The last time I ate at Cyma was in 2011 and I suggested we have dinner there since I saw Chef Robby Goco post pictures of some of the new dishes he created for Cyma. 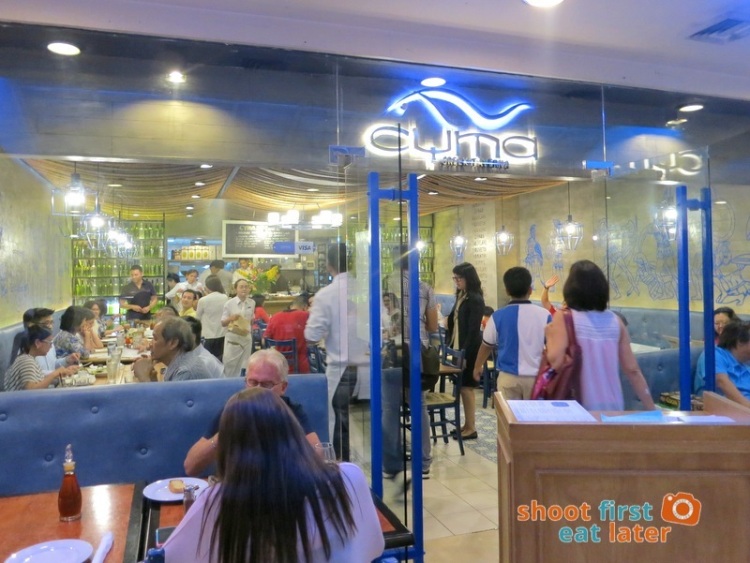 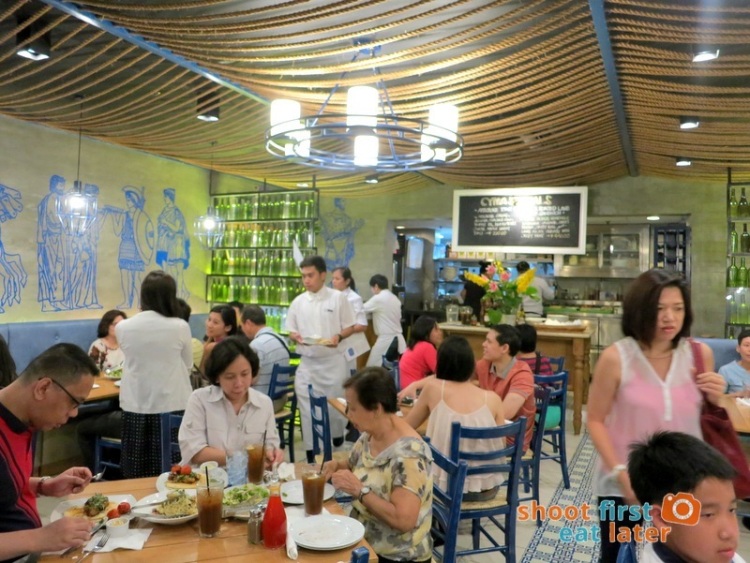 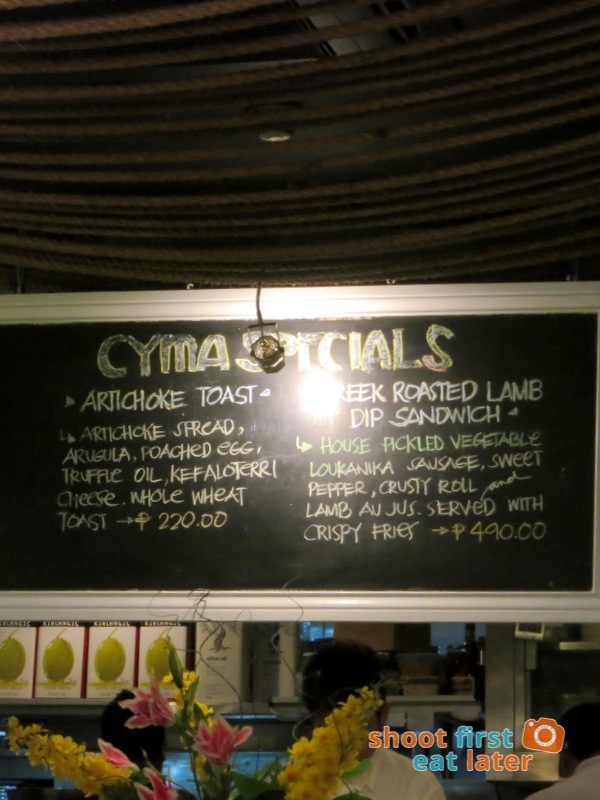 It was actually the picture of the Crab Toast with Lemon Aioli Crab Toast with Lemon Aioli P260 that excited me most. We cut the single piece of toast into 6 pieces so all the adults can try it. Crispy and hearty toasted bread was spread with a thick layer of tangy tzatziki (cucumber with Greek yogurt) and topped with fresh crabmeat and drizzled with lemon aioli. The combination of flavors was absolutely amazing! The first thing that you notice is the tart and tangy tzatziki which was immediately mellowed by the sweet crabmeat then the citrusy aioli hits your tongue giving it another flavor blast.  For days after I kept thinking about this appetizer. An order of this and a small salad would make a good meal for one which I plan to have one day.

Another hit with the adults and kids was the Loukanika P350 a Greek pork sausage which had very flavorful spices. It came to our table sizzling and smoky. A generous slice of Greek feta cheese topped the sausage. I suggest you order a side of pita bread to eat this delicious cheese and sausage appetizer.

The only appetizer we didn’t like was the octopus that was neither tender nor tasty. Such a small serving and we didn’t even finish this.

The dip sampler was superb as usual. I only wish they had little flags or labels next to the spread so we will know which we liked and which we should pass on the next time. It was very easy to get full eating pita after pita with different dips so take it easy or else you’ll be full by the time the entrees are served.

One of the older kids ordered the Saganaki (Flaming Mozzarella) P220 and it was a nice show with the lighting of the cheese into a ball of flame and the waiters shouting “Opa!” but it didn’t taste anything special. It was just melted cheese but the kids liked it.

I loved the Uni Pasta at Green Pastures and was eager to taste Chef Robby’s Greek interpretation too. In Cyma’s version of the pasta was with uni (sea urchin), Greek olive oil and garlic and it actually tasted similar. My friends who don’t eat uni tried it and liked it. It was a simple but tasty and creamy pasta dish. I would ask for lemon to squeeze on the pasta next time.

My savvy godson Zak ordered a giant platter of Greek Clams Pasta P750 which the 4 kids almost demolished before I requested to have the plate transferred to the adults table so we could at least try it. I never order vongole pasta after having dry and uninspired versions too many times. When I tried this I was shocked at how good it was. The simple sauce made with white wine, olive oil, lemon juice, parsley and clam broth was absolutely perfect.

The sauce was so good we actually dipped some leftover pita in it and ate it. Even though the clam meat were tiny and malnourished we didn’t mind. This is a MUST order!!!! 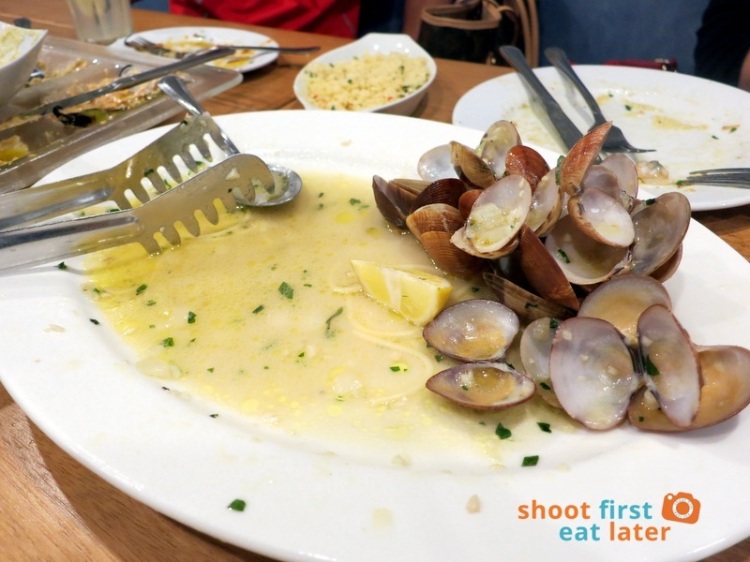 Jenny ordered the chicken fingers for her boys who were picky eaters but they ignored it and ate the Greek clams pasta instead. She was surprised since they’ve only eaten pasta with tomato sauce before. I guess seeing Vivian’s boys eat the pasta with gusto made them want to try it too.

Both the Ground Lamb Souvlaki P495 and Paidakia (lamb ribs) P750 I highly recommend for those who love lamb like me. Cyma never disappoints me with how well they cook their lamb dishes. They’re always well seasoned and cooked to perfection.

The 5k bill was for 5 adults and 4 kids and we had no leftovers except for the chicken fingers. Even after all these years Cyma is consistent in serving delicious Greek food to Filipinos. I’ve never been to Greece and hopefully one day I’ll get there. And when I do I will know my meals in Cyma will be a good example for what to expect. 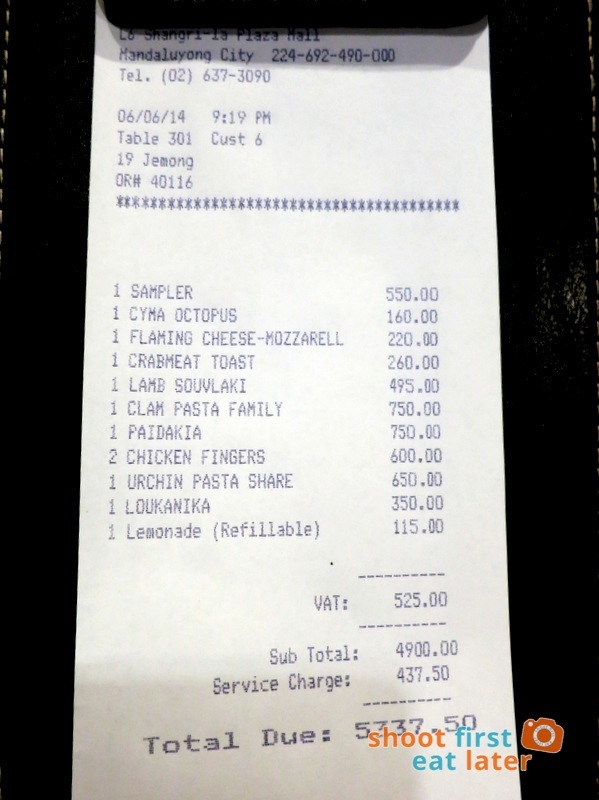 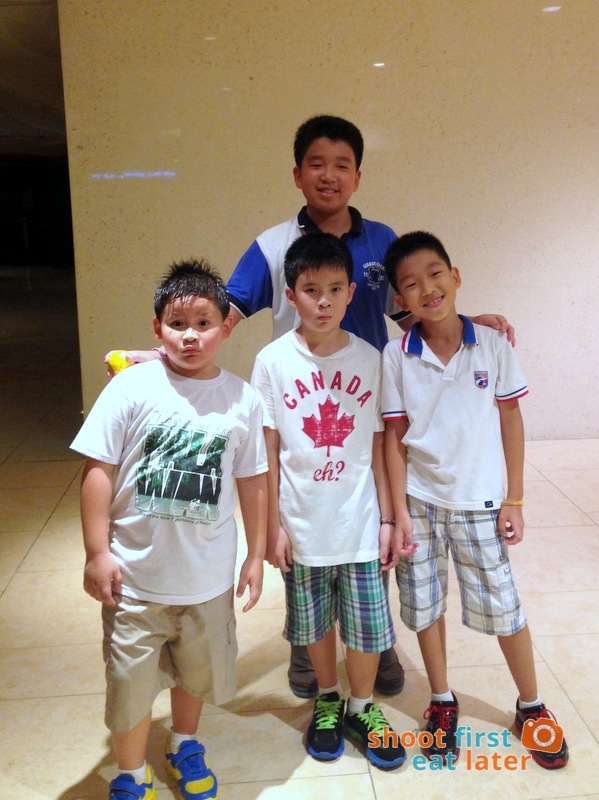 What’s your favorite in Cyma? Share it with me and my readers so we know what else to order next time.

One thought on “Cyma at Shangri-La Plaza”