Before going on a trip I usually do some research on places to eat and shop. I found a list from Ray Foley’s book “1,001 Sandwiches You Must Eat Before You Die” which listed the places in Washington DC, Northern Virginia and Maryland. One of the restaurants on the list, Chutzpah Deli, happened to be only 5 minutes away from my cousin’s house. It was also in the same strip mall as one of my favorite stores, TJ Maxx.

Armed with La’s car and the gps which I named Svetlana, it was the beginning of my eat and shop adventures.

I went in at 12:45 pm and the place was full. I decided to buy my sandwich and eat it at home. 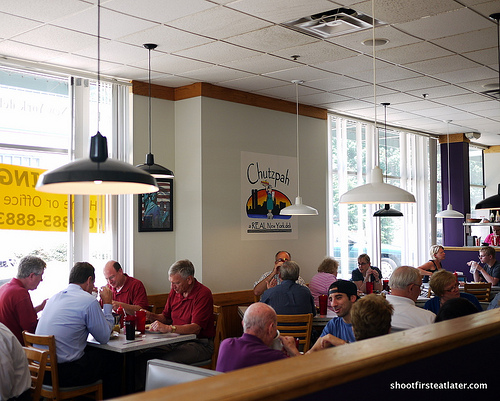 The sandwich came with pickle spears and a container of potato salad.

The potato salad was yummy. It had pimiento in it which was a change from the traditional potato salad. 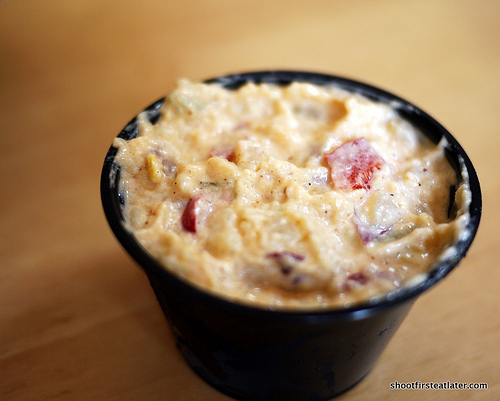 I ordered the The “Fuggedaboudit” as recommended by Ray Foley. It was amusing when I tried to order the sandwich since I fumbled with the pronunciation by saying it slowly syllable by syllable. The guy at the counter yelled, “you mean the forget-about-it!” Naturally, he said it fast and with confidence.
The “Fuggedaboubit” is a Chutzpah original made with hot corned beef and pastrami with a schmear of chopped liver on grilled rye with melted Swiss, cole slaw and Russian dressing. It was everything I liked all in one sandwich. Yes, even the chopped liver. In my mind it was paté.

This is what it looked like after I sliced the sandwich into a fourth. It was definitely overstuffed and messy to eat. But, oh boy, was it finger lickin’ good! The chopped liver added a creamy texture to the cured meats which weren’t salty. The coleslaw gave the sandwich a nice crunch. And the bread… the rye bread was out of this world good. I love, love rye bread but good rye bread does not exist in Manila. This was the real stuff complete with caraway seeds.  Rye bread slathered with butter and grilled to a crisp definitely put it over the top. 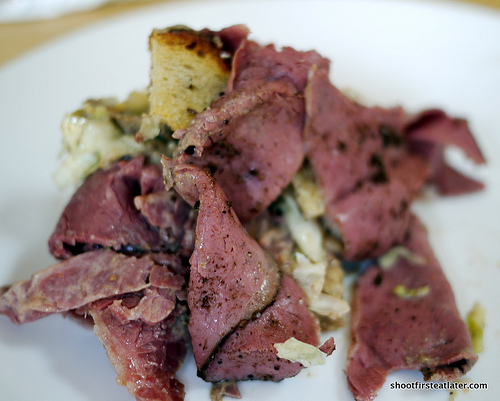 I managed to eat only half. But it was a good, good half I tell you. 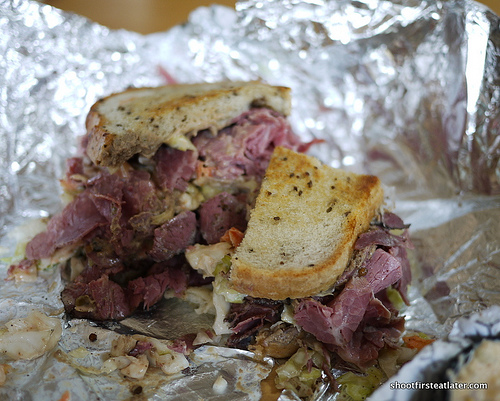 One thought on “Lunch at Chutzpah Deli”