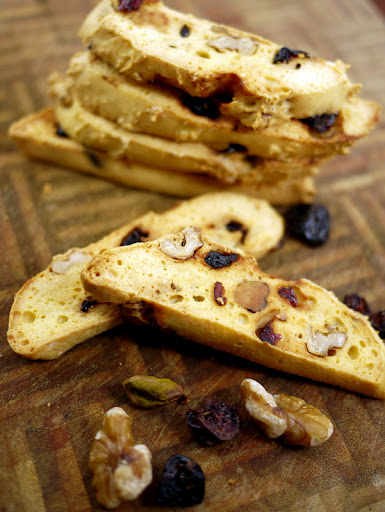 I never liked biscotti. I always thought it was dry and uninteresting. That was years ago when my taste buds were still immature.

My new love for biscotti began when I bought a chocolate chip biscotti at Figaro. I had a credit card receipt that allowed me to claim free goodies in Figaro and I added a biscotti just to reach the allocated amount. I was surprised how it sated my usual craving for cookies without as much fat and sugar. Since then I’ve also bought my share of Starbucks‘ chocolate biscotti.

Since we have a 4 day weekend in Manila I tried my hand at making biscotti. Instead of the usual sweet biscotti I decided to make a savory biscotti. I used Mark Bittman’s recipe which made a small batch in case things go wrong. I also added a mixture of dried fruits and nuts which I had lying around to add more texture and flavor.

I chose this recipe because it didn’t contain butter and had very few ingredients all of which I had on hand.

I used this cheese which I bought in Unimart. I suggest using sharp cheddar cheese for more flavor.

Other biscotti recipes don’t require a food processor but this one did. If you don’t have one I think mixing the batter by hand would work too. Just don’t over beat it.

Process the eggs and cheese in the food processor until thick and yellow for about a minute.

Add in all the dry ingredients and pulse a few times until the flour is incorporated.

I added the dried fruits and nuts and mixed the batter gently by hand. The batter should be crumbly and drier than this but I used an extra egg thinking our local eggs are smaller than American sized large eggs. Next time I’ll stick to two eggs.

Form the batter into a log on a baking sheet lined with parchment paper or a silicone mat. Smooth the surface.

After the first baking of 20-25 minutes this is what it looked like. Let it cool for 10 minutes then slice with a serrated knife.

Place the sliced biscotti on the baking sheet and bake again for 15 minutes.

Flip the biscotti over and bake for another 10 minutes. Let it cool completely and do not be tempted to eat before then.

1. Heat the oven to 350C or 180F and line a baking sheet with parchment paper or a silicone mat. Put the eggs and cheese in a food processor and process until yellow and thick, about a minute. Add the flour, baking powder, salt and cayenne and pulse three to four times until just mixed. Do not over beat.

2. Transfer the dough out onto a lightly floured surface and gently knead it until it holds together — it may be a bit crumbly at first. Shape the dough into an 8-10″ log then transfer to the baking sheet and gently flatten.

3. Bake until the log begins to color and is firm to the touch about 20 to 25 minutes. Cool for about 10 minutes, then cut on the bias into half-inch slices. You can also slice them straight across horizontally for smaller pieces. Lay the biscotti flat on the baking sheet and bake until crisp and toasted, 15 minutes; flip and toast the other side for another 10 to 15 minutes. Cool completely before eating. Makes 16 biscotti.