Day 3 in Batanes brought even more spectacular views. This was my favorite day. I took so many pictures that I have to split this day’s shots into three entries.

No more boat rides! We spent the day driving around Basco. 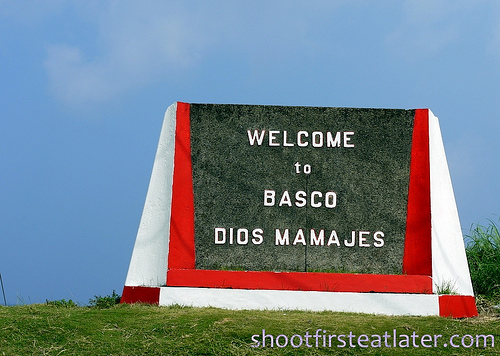 We drove by the other places where you can stay in Batanes. We didn’t get to see the interiors though. But after seeing all these lodging we all agreed that we made the right choice of staying in Batanes Resort. We loved the big property and individual cottages and of course the view of the water. 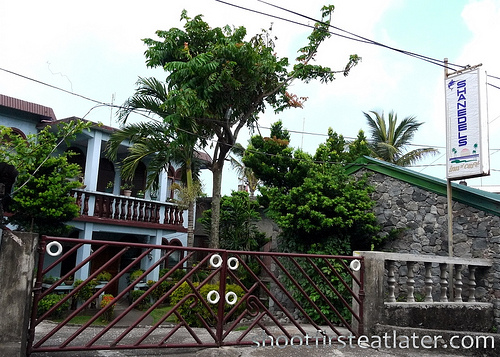 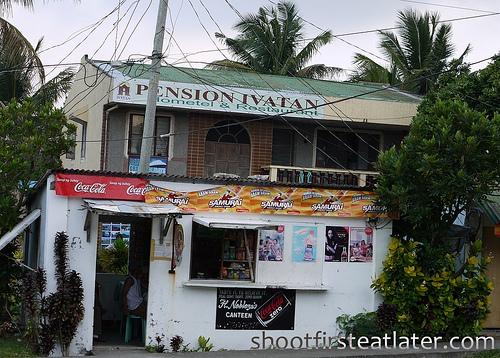 We drove to the Capitol where our tour guide, Chris, had a surprise for us. 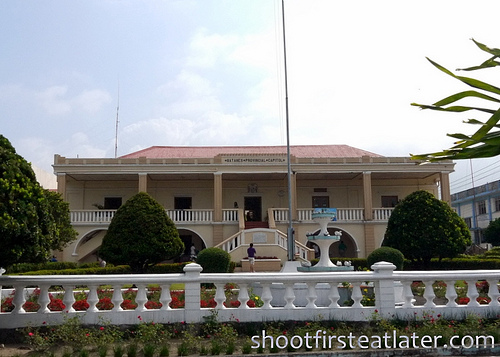 This wasn’t part of the itinerary but he thought we would enjoy the Kulay Festival, an annual event held by the local government to  promote eco-tourism and sustainable environment. 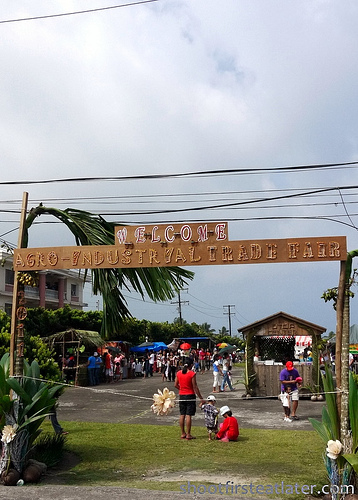 There were street dancers and floats but what we enjoyed most was the open market selling all kinds of local delicacies, fruits, vegetables and even meat.

We had to buy fried sweet potatoes again! They put much less sugar than the Manila version.

The simply boiled sweet potatoes tasted even better. They were so much sweeter than those in Manila. 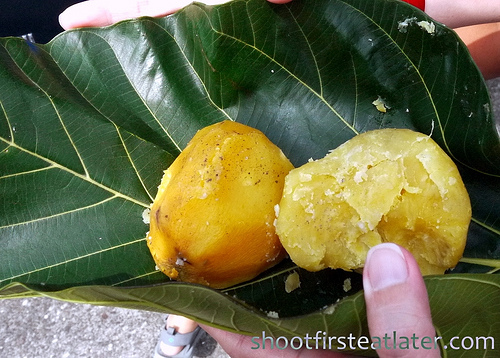 Next was the long and winding drive to Chawa View Deck in Mahatao.

Due to so many blind corners there were plenty of signs with “Blow Ur Horn” painted on rocks. This was exactly how it was written decades ago, long before cellphones and text lingo. They were ahead of their time. ☺ 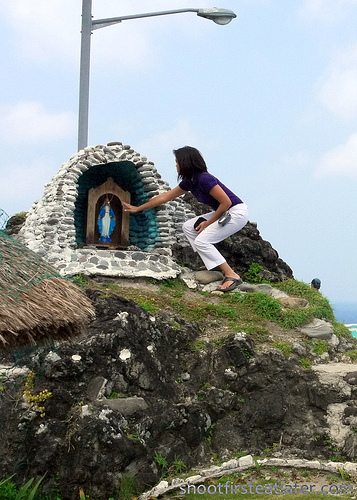 The view from the Chawa view deck was amazing. But when I saw all those stairs I knew my sore knees wouldn’t forgive me. So I didn’t go down.

I did the next best thing. I sent my camera with Vivian and she took the next 7 pictures. Great shots Viv! Although there were far too many pictures of her family. Ha ha. 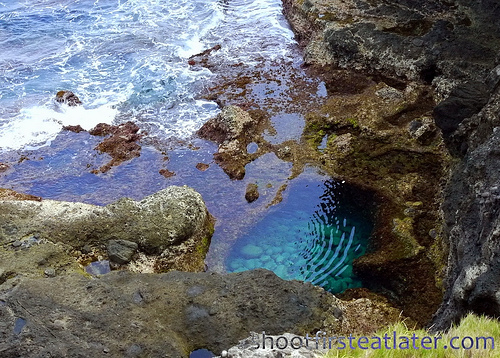 The water in that small area is a different color. Pretty. 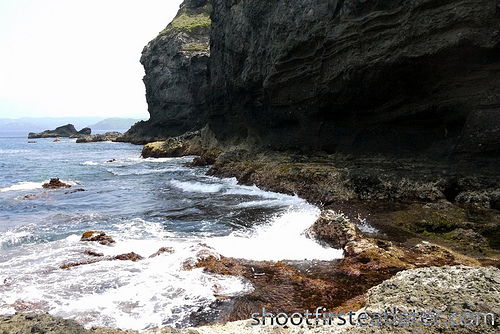 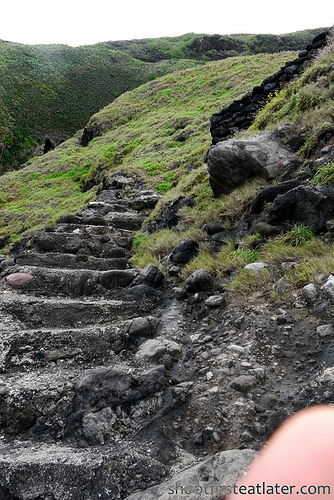 We stopped the van along the way and took this picture.

The next stop was Mahatao town proper where the San Carlos Borromeo church was. This church was completed in 1789 and has been declared  by the National Historical  Institute as a Heritage Site. 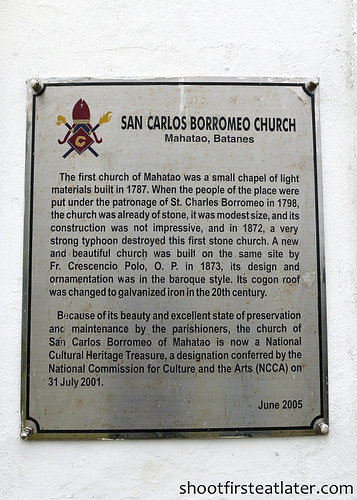 You can see the limestone used on the church’s steps.

Most of the churches we went to in Batanes had beautifully maintained gardens. 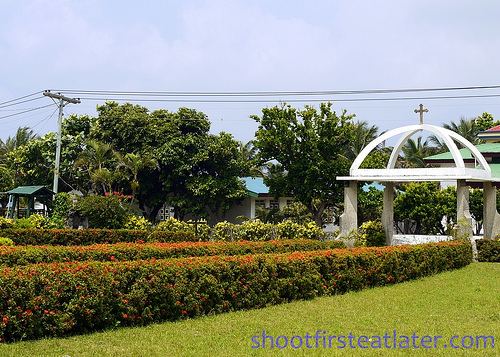 Right at the edge of the garden was the oldest and smallest lighthouse in Batanes.

Another lamp was across the street in the backyard of a house. Lamps were placed in both lighthouses and the fishermen would head towards the middle of the lights. 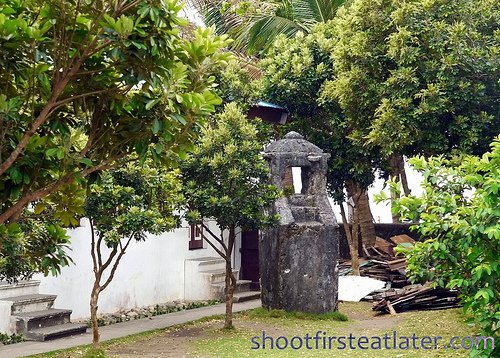 Wilson is wearing the best souvenir from Batanes.

Another beach not being used for swimming. I wonder why there isn’t a beach resort in Batanes when everywhere we go there are beaches and the whole island is surrounded by water. 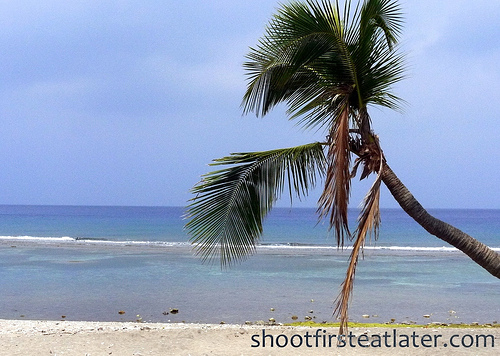 Watch out for part 2.