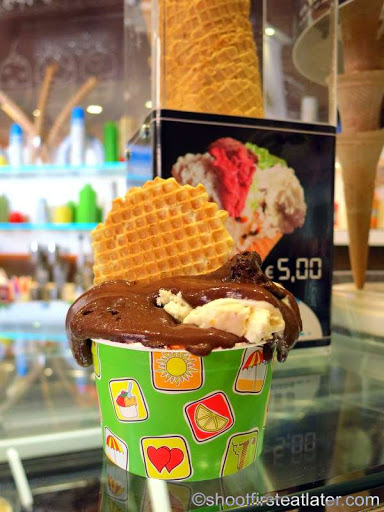 I wasn’t planning to eat gelato at 10:30 in the morning. I just went in to waste time while waiting for Tazza D’Oro to open and this gelato shop was just across it.

Look how near Gelateria Lo Scimmiotto was to the Pantheon.

Of all the gelato we’ve eaten in Italy this was the most commercial and touristy looking one. At least the gelato wasn’t in high mounds filled with air.

This was the first time I’ve seen pinocchio flavor gelato.

The crazy colors frightened me a bit.

I was about to leave when I spotted the flavor cioccolato arancione. With my almost non existent knowledge of Italian I had a feeling it meant chocolate orange and I was right. Chocolate orange is my  most favorite flavor combination. I even wrote a post on all the chocolates flavored with orange that I love. Finding this flavor is ice cream or gelato is extremely rare that’s why I just had to try it. I paired it with torrone or nougat flavor gelato.

The gelato was way too soft and melted really quickly. It was a mess to eat. The chocolate wasn’t as dark as I liked it but I still loved the flavor. The orange was very distinct. The nougat flavor was a good balance for the chocolate too.