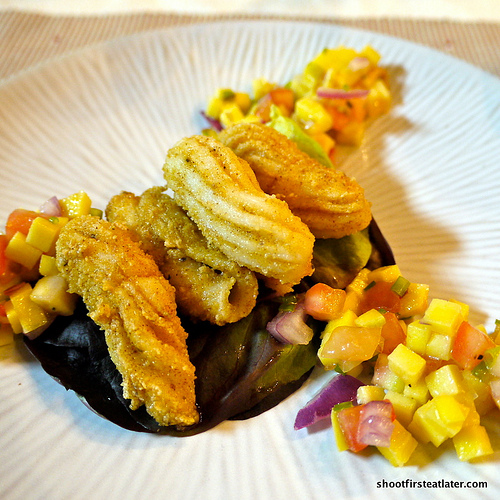 Thanks to Michelle for inviting me to join her group to have dinner at Chef’s Table. I’ve always wanted to try the food at this private kitchen run by Chef Bruce Lim, a popular Filipino Chinese chef who has his own tv show, Tablescapes on the Asian Food Channel.

The well lighted rooftop garden was visible from the street.

Chef Bruce and his wife are lucky to live and work in a building with a beautiful outdoor, rooftop garden.

The dining room was also the setting for the tv show thus the numerous lighting. There were 3 different groups dining there that night. As much as the chef would like to serve everyone at the same time, the last group came pretty late. He started serving our group and the other party of 2. 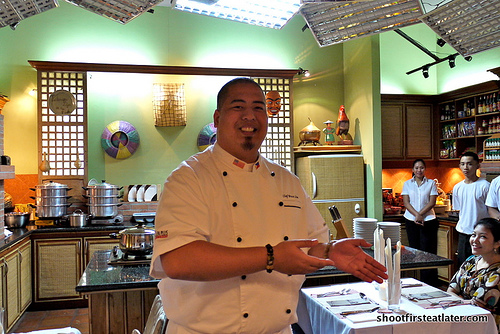 For such a small place there were so many servers. If I’m not mistaken there were about 6 waiters who provided quick and attentive service.

Chef Bruce informed everyone that dinner was made up of dishes that used all local ingredients to give the food a unique Filipino twist. 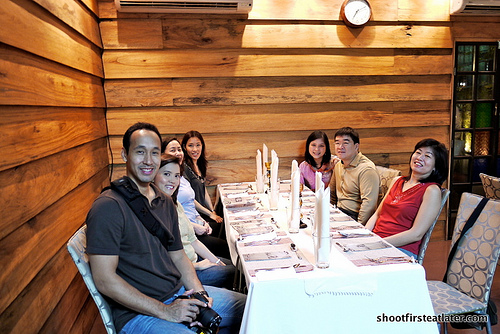 I asked Chef Bruce what the soup was called. He told me none of the food that night had official names so I told him I’ll make up the names. He smiled and said, “go ahead.”
I loved, loved, loved the soup. It was inspired by laksa, my favorite Singaporean noodle dish. The big difference was the soup wasn’t spicy. It had a slight coconut flavor and the stock was very rich and flavorful. It reminded me of lobster bisque instead of laksa. The fish and noodles were the perfect foil to the rich soup. Our only gripe was the soup wasn’t hot. I told Chef Bruce about it and he listened because we watched with envy when we saw the next table’s piping hot soup pass us.

Chef Bruce torched the romaine leaves for our caesar salad. Honestly, I couldn’t tell the difference with my salad. 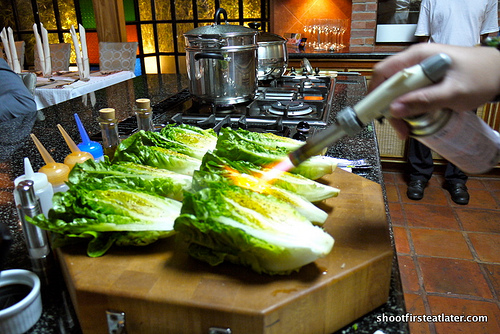 The chef explained to us that the caesar dressing was made with Filipino ingredients like calamansi and patis instead of lemon and anchovies. It worked! And instead of the usual fried chicken strips on the salad he added sinampalukang manok or chicken cooked in tamarind broth. I liked the salad but the chicken was a disappointment. It tasted like chicken poached in regular water  to me. I didn’t taste any sour flavor or otherwise.

The fried squid was super tender. The unique green mango salsa went well with the squid.

The main course was a perfectly steamed filled of senor lapu lapu or coral trout on a bed of mashed ube (purple yam). Chef Bruce explained that he added 10% potatoes to the ube mixture to make it less starchy. I was hesitant to try it since I was used to sweet ube halaya or ube ice cream. I was surprised that it was so good. There was the ube flavor but it also worked as a savory dish. The whole dish was liberally seasoned with Asian sesame oil which added another dimension to the fish and ube. 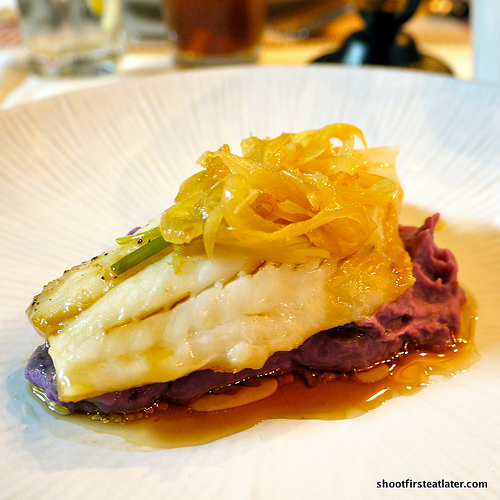 steamed senor lapu lapu on a bed of mashed ube

As a surprise to Michelle, the owner of Putong Ube, chef Bruce used ube and pandan puto in his mango trifle instead of the usual sponge cake.  Aside from puto there were also mango cubes and mango custard to cover it all. It was amazingly yummy! We all wanted seconds. 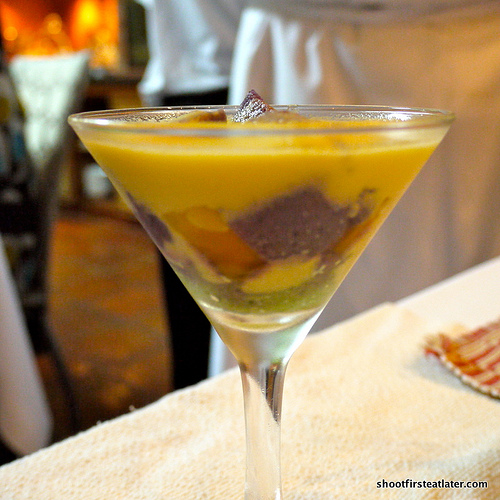 chunks of ube and pandan puto visible in the trifle 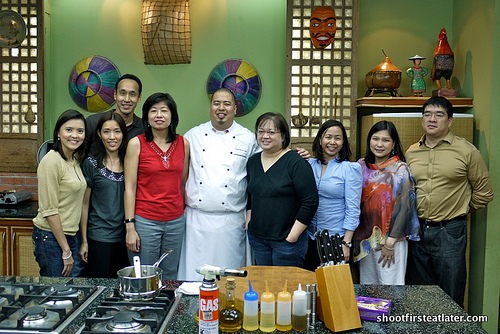