I’ve eaten in Motorino Hong Kong before that’s why I was excited when I heard a Manila branch was opening. You see I love pizza. I love love love pizza. I’d rather eat pizza than white rice.

My Tuesday group wasn’t too eager to have pizza for lunch but I told them I was treating that’s why they immediately agreed. Motorino is located in Greenbelt 3 a place most of us haven’t been to in a long, long time. I remember when Greenbelt 3 was new it was the hottest place in Manila.

The Manila branch was easily two times bigger than the SOHO branch in Hong Kong.

They had the same wood burning brick oven.

You don’t see tin ceiling tiles in Manila too often.

The single page menu was almost the same as Hong Kong except a few missing items. 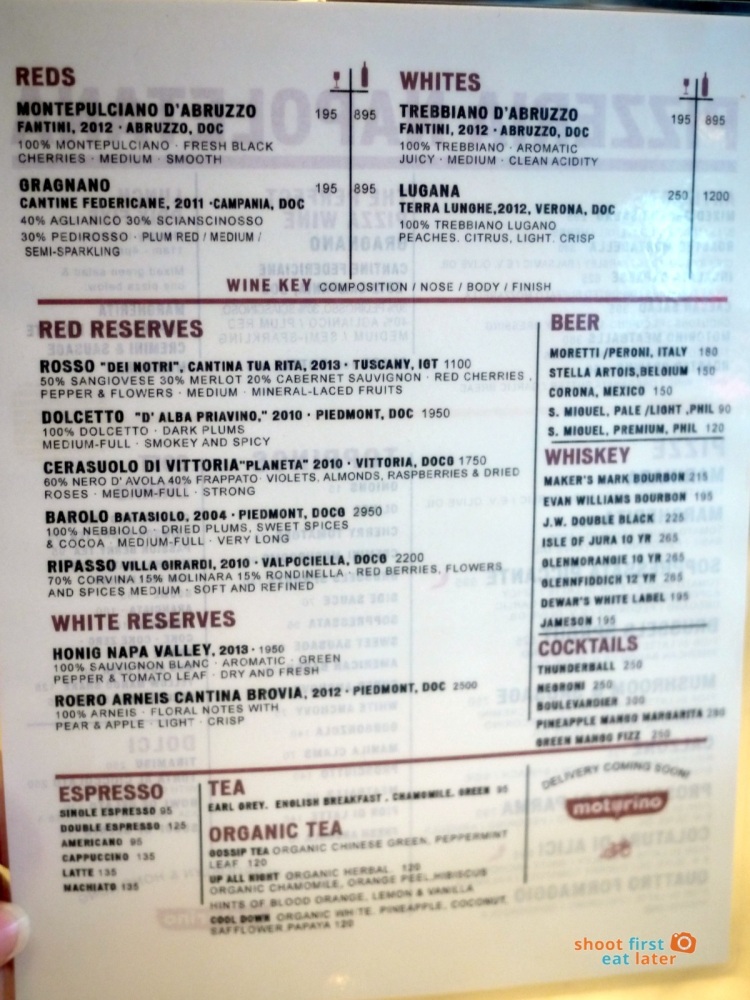 Neapolitan pizza is unlike any pizza we have in Manila. The nearest would be Gino’s Brick Oven Pizza. I don’t think there’s any other wood-fired oven in Manila.

You MUST order the Caesar salad with a generous shower of fresh Pecorino cheese. No green cans here. Even the crouton which came as a large slice of toasted bread was good. This is not your usual Caesar salad. An order is good for 2 people to share.

Motorino’s pizza is 13″ big and is sliced into 4 pieces. That’s quite a big slice and you have to fold it in half to eat it. Since there were 5 of us we requested the pizza be sliced into 6 instead. This way we got a normal slice each and we got to try more variants. Luckily my friend’s son had a good appetite and ate 2 slices per pie.

Our first pizza was also everyone’s favorite. Just take a look at the super generous amount of prosciutto. It was a bit salty but then that’s just how good prosciutto is. It was tempered by the fantastic fior di latte or cow’s milk mozzarella they used. The next flavor level came from the pecorino cheese which added a different kind of saltiness. The arugula added just the right touch of peppery kick to the pizza.

My friend said it’s as good as prosciutto pizza she had in Melbourne at half the price. She even declared this the best pizza in Manila!

If you are a regular reader of this blog then you know that I prefer a thin, crispy crust pizza. But when I took a bite of the hot, bread crust I was amazed at its chewy texture that I ate even the edge of the crust with gusto. This is just one of the very few pizzas that I ate all the crust. Tip: Dip the remaining crust in the Caesar salad dressing.

Mushroom and sausage are two of my favorite pizza toppings unfortunately Motorino’s sweet sausage was too bland. I appreciated that they used fresh cremini mushroom but it was sliced too thinly that’s why I barely tasted it. This was my least favorite pizza. 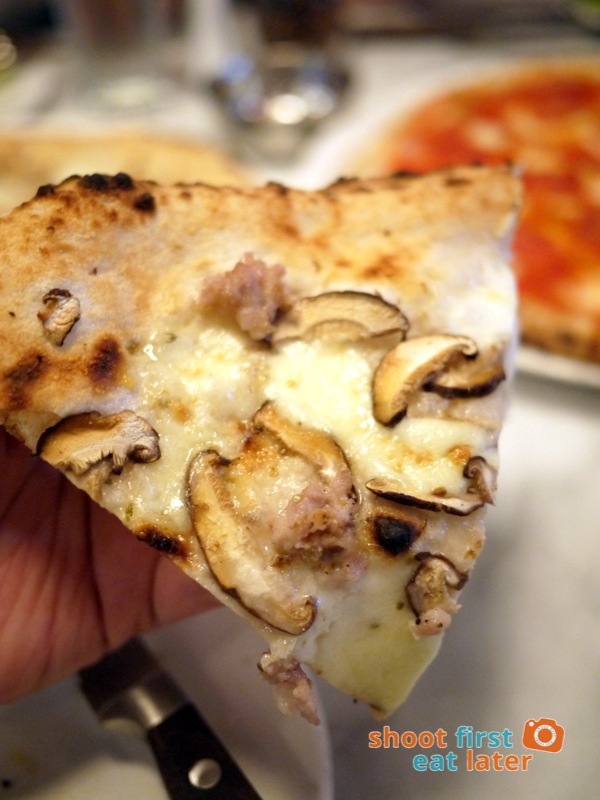 The star of Motorino is the pizza with their homemade spicy soppressata. You may find it strange at first that the pizza was very wet and saucy but I promise you it’s very, very good. You won’t find this kind of pizza anywhere else in Manila. It’s a MUST order unless you can’t stand the mild heat.

“Cooking it [sopressata] really takes it to another level and brings out the spiciness, the saltiness, and the pork. The fat that renders in the heat cooks the garlic slivers that we place on top and makes it a flavor opera.” Mathieu Palombino, Motorino (source)

3 pizzas and we were not yet that full save for Matthew who had already eaten 6 slices. Initially they wouldn’t serve the Brussels Sprout pizza because they ran out of bacon but I begged them to replace it with soppressata and it worked very well with the pizza. If you’ve never tried Brussels sprout then this pizza is the perfect way to try it. The charred leaves have a slightly deeper flavor which I really loved. This is a simple no sauce pizza wherein you can taste the excellent quality of the mozzarella cheese. It tasted very clean yet full flavored.

Sure it’s more expensive than other pizzas but the quality of the ingredients and the pizza dough put it above all the rest. Give it a try and you’ll feel like you’re back in New York.