Hello New York!!!! I was so excited to be finally in the city that never sleeps. We only had 2 nights and 2 days to eat as much as we can. We weren’t even planning to do any sightseeing or shopping. It was all about the food baby!

After the four hour drive from DC, which Sha handled magnificently, we arrived at our first stop, New Jersey. My cousin Virgil was nice enough to let us stay overnight in his house which was a stone’s throw away from New York City. Yes I have more cousins in the east coast. Virgil is my cousin on my father’s side.

When we got to Joe’s Shanghai the restaurant was packed. We listed our name and walked around looking for something to snack on. We were famished. Our last meal was hours and hours ago. Across the street we found the New Golden Fung Wung Bakery.

They must have a lot of Filipino customers.

There was very little left on display yet my two cousins went crazy buying all sorts of Chinese pastries to bring back to Virginia. They bought mini apple pies, egg tarts, raisin bread, mooncake and of course hopia.

In the store we ate pineapple tarts and coconut custard tarts which were really, really good and cost only $.75 each! You definitely won’t find that in Virginia. 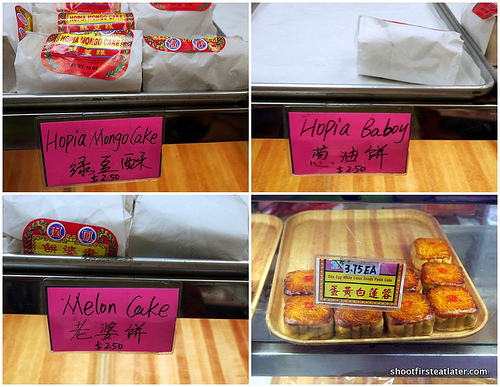 The first time I tried Joe’s Shanghai was 10 years ago when Rochelle and I went to New York and my father’s friend brought us there for a late, late dinner. He picked us up from the airport and we got to the restaurant at around 10 pm. We insisted we weren’t hungry but he really wanted us to try the best Chinese food in New York. Rochelle and I wolfed down 2 baskets of xiao long bao, Shanghai noodles and fried string beans. It was the best crab and pork xiao long bao I had ever eaten at the time.

The next couple of times I went to New York I introduced Joe’s Shanghai to my cousins Virgil and Dexter.  Both of them have been living in New Jersey and worked in New York for decades and haven’t been to Joe’s Shanghai. It has been one of their favorite ever since.

It was only natural that my first meal in NY be at Joe’s Shanghai in Chinatown.

90% of the diners were Americans.

my cousins Jerome and his brother Virgil

Sha had these turnip cakes at Joe’s Shanghai midtown branch and she raved about it. 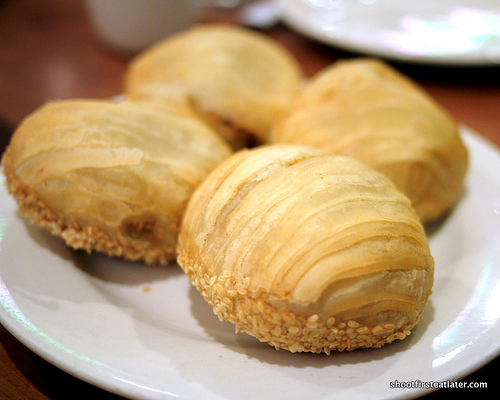 Unfortunately it was very disappointing. It was cold, hard and the filling was dry. It was nothing like the hot, flaky, melt in your mouth turnip cakes in Hong Kong.

I wanted to know if my memory of the crab and pork xiao long bao was still the same. After eating a xiao long bao I felt it was good but not as good as the ones I had at Din Tai Fung in Taipei, Wu Kong in Hong Kong or Lugang Cafe in Manila.

The skin was thicker and not as delicate as what I hoped for. The soup and filling wasn’t as flavorful either. But it wasn’t bad at all. I guess 10 years and several xiao long bao tastings in different countries have exposed my taste buds to finer flavors. 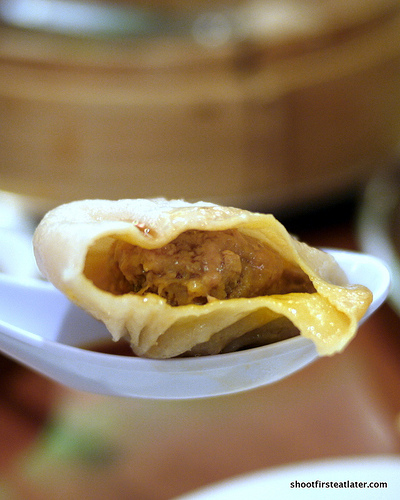 Virgil ordered the braised duck which was a first for me. We usually eat duck fried or roasted but never braised. 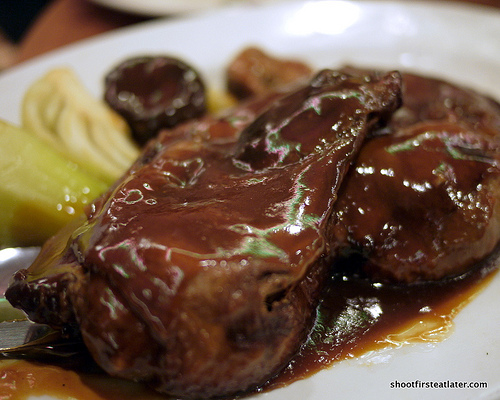 What a revelation! It was fork tender and very, very tasty. The duck soaked up all the flavors from the spices and liquids it was braised in. All the fat had melted and what’s left was rich, flavorful and juicy duck meat.

I wonder if they have this dish in Manila and Hong Kong. I want to eat braised duck again.

The Shanghai noodles were as yummy as I remembered. 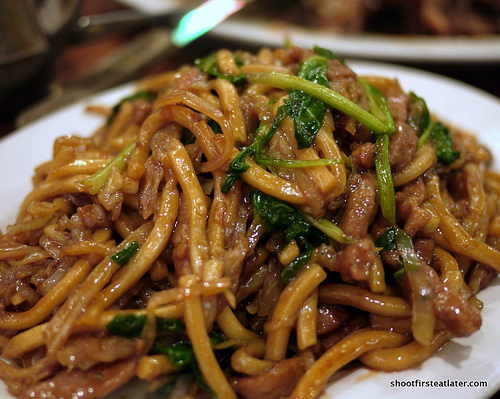 The string beans were fried dry and as a result they were firm yet tender and crunchy. Delicious!

For dessert we were given free orange wedges.

Next door is a familiar restaurant for Filipinos. Just like in Manila, Quickly served all kinds of milk teas and other refreshing beverages. My cousins had taro milk tea and red bean milk tea for dessert.

Thanks a lot Virgil and Jerome for treating us to a wonderful dinner in Chinatown. I didn’t realize I missed Chinese food already. Almost 6 weeks in the USA and it was only my second Chinese meal.

Hours: 11am – 11pm
Reservations: Not Accepted