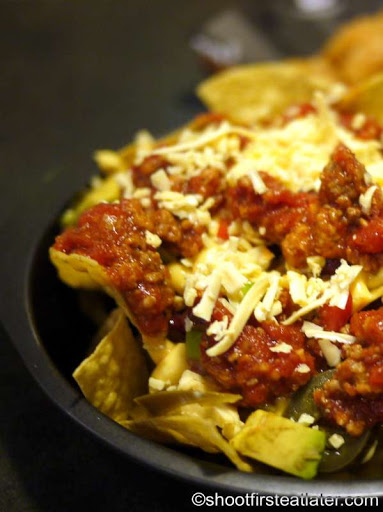 Every few months my two blogger friends, Fran and Jin, and I meet up just to eat and chat. Well mostly we just eat and compare restaurants we like and dislike.

Our choice for dinner was Burger Bar at Greenbelt 2 in Makati. It occupied the 2nd floor while the space below was namnam restaurant.

It was a weeknight and the place was full and the turnover was quick. Each time a table is vacated a new group comes in.

me, Jin, Fran and Paul

My first bite of these small fried shrimp was good. It was crispy and it had a nice flavor.

But as I chewed I noticed that the shrimp was too soft and soggy. When I dissected it the shrimp wasn’t even firm enough to hold it’s shape. Was it frozen shrimp? I hope they can improve on the quality of the shrimp they use.

I was happy that all my dining mates loved nachos as much as I do. It was pretty good nachos with lots of ground beef, salsa, avocado cubes, cheese sauce and grated cheese. My only gripe was it was cold! Not even warm but cold. I wish they could put this under a salamander for a few minutes to warm it up and melt the cheese.

Fran wasn’t impressed with the Arnold Palmer which had neither obvious iced tea or lemonade taste since it was supposed to be a combination of both.

I was hoping somebody would order the lamb burger since I wanted to try it too. Jin ordered it and I’m glad she had it and not me. I tried a small piece of the lamb patty and found it to be totally tasteless. As in no salt or flavor at all. We mentioned it to the server and he asked the kitchen about it. He came back and told us it was supposed to be like that.

Jin doctored her lamb burger with lots of catsup, mustard and the leftover toppings from the nachos before she was able to eat it. This was the most disappointing burger of the night.

Fran was quite happy with her hangover burger which she ate with a fork and knife. The burger is described as:  Onion-griddled Big Game blend of hangar and brisket, yellow cheddar, crisp prosciutto, fried egg, arugula, caramelized onions, BBQ sauce and house aioli on a sesame seed bun.

It looked juicy and messy indeed.

If you’re a regular reader of my blog you know that there’s only one way I order a burger. I want a plain burger with no cheese or toppings. For me the most important part of the burger in the patty and I want to taste it and not get distracted with anything on it. I ordered the simplest burger on their menu which was burger no. 3. No. 3 was what they called their special sauce. I didn’t mind trying a little sauce on my burger.

Paul ordered built his own burger which basically looked like my burger but with the addition of some veggies on top.

Hello? Sauce no. 3 is a blend of catsup and mayonnaise!!! I quickly scraped it off my burger since I wasn’t fond of the combination on a burger. On fries it was fine. First thing I noticed was the nice even char on the patty.

Inside the beef was cooked a perfect medium well. I liked the taste of the patty. I chose the steak cut blend of beef and it really tasted almost like steak. It was well seasoned with only salt and pepper and no other additives just the way I like my burger. It was not the best burger I’ve eaten but it was quite good.

You probably can’t tell from the picture but it was a small sized burger. Those with heartier appetites can easily eat two burgers or double up on the patty.

All their desserts were ice cream based and stacked in a small jar. The banana split was just your run of the mill sundae.

Try it out for yourself and let me know how you like Burger Bar. I was quite satisfied with my burger. I  just wish they had a set of 4 sliders featuring each of the different burger blends so I can try the it all and compare the flavors.

4 thoughts on “Dinner at Burger Bar”