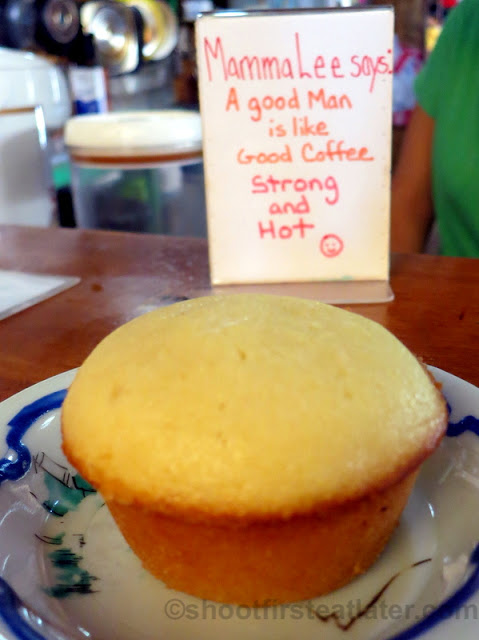 Who hasn’t heard of Real Coffee’s famous calamansi muffin? Blog after blog have written about this ‘not to be missed’ treat. So after our lunch at Mañana Mexican Cuisine we went in search of some coffee and dessert.

Real Coffee was located at the end of a small alley. It wasn’t hard to find since there were signs everywhere.

This is Mamma Lee who together with her daughter Nadine run Real Coffee.

Admittedly I’m a coffee snob. I’ve seen how drip coffee is meticulously made in Third Wave coffee shops in San Francisco so I was cringing a bit when I saw hot water from an airpot being poured into a drip coffee maker while being vigorously stirred.

I ordered real coffee which was a shot of espresso added to brewed coffee. They used a moka pot to make the espresso.

Since it was so hot I couldn’t bear to drink hot coffee so I ordered my Real Coffee iced. It was just ok. It wasn’t strong enough for me despite the shot of espresso. Since it was iced the brewed coffee had to be stronger too but it was just regular strength. Nevertheless it was a pleasant relief from the heat.

I love peanut butter and it’s rare that I see peanut butter brownies in Manila that’s why when I saw it on the counter I immediately ordered one. The brownie had a good and yummy peanut butter layer which I loved. I just wish the chocolate part was fudgier.

I’m not a muffin lover. I’d rather eat a cookie or brownie over a muffin. I don’t think I’ve ever posted a muffin on this blog before. But since it’s the most popular item I had to try it.

At first bite my first thoughts were, “What’s so special about it? Why is everyone raving about it?” It was tender and had a distinct and pleasant calamansi flavor but I didn’t love it that much. We still bought  a couple to take out. Later in the afternoon when I wasn’t so full anymore I took another bite of a calamansi muffin and that’s when I appreciated it more. It was really good! Moist, not too sweet and such a lovely citrus flavor.

At the airport I met up again with my friends Gem and Lisa and they told me they ordered two dozen calamansi muffins to take back to Manila. Real Coffee delivered the muffins to their hotel for only P50 delivery fee. Darn it. I wish I bought a box too.

Since I don’t have plans on going back to Boracay soon I will just try this calamansi muffin recipe hack of Pepper.Ph. By the way I agree with Mama Lee. 😀