About 3 months ago celebrity chef Todd English came to Manila to open the 2nd branch of Todd English Food Hall. The first branch is in The Plaza Hotel in New York City. Imagine the hoopla this caused with Manila’s diners who wanted a taste of the TV chef’s restaurant. The lines were crazy long that’s why I waited until a couple of weeks ago to try the food at Todd English Food Hall in SM Aura.

The 900 sq, meter restaurant was designed by Ivy Almario who did a great job since she used my favorite colors orange and black.

Just like many first timers I didn’t know that the various food stations around the restaurant was actually just well arranged open kitchens. You take a seat at your table and order just like in any other restaurant. So it doesn’t really matter where you sit. 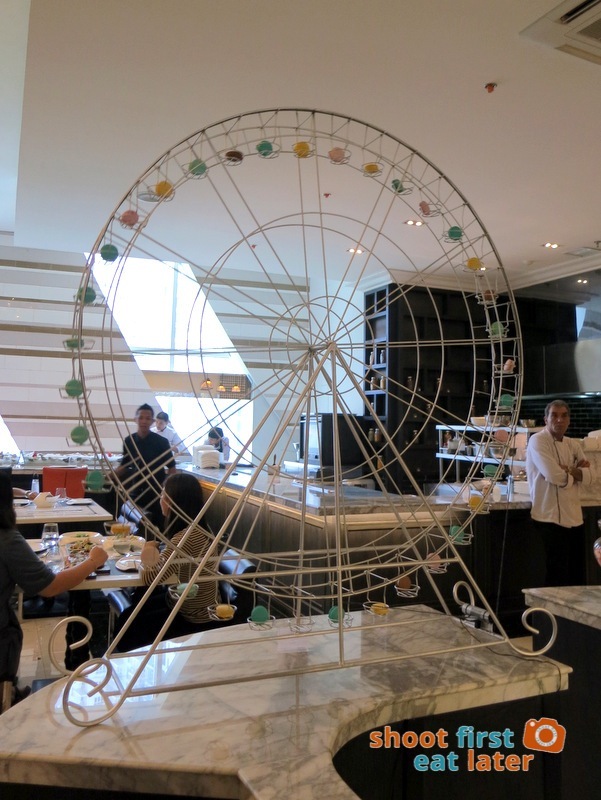 The menu was a mix of international influences. I normally am wary of such mixed cuisine but based on the food we ordered they know their food. The implementation was very good. By the way there are way too many typos in their menu. I hope they correct it in the next printing.

Our first time at Todd English we were a group of four women and one young man who wanted to try everything all at once. With a little head scratching we decided on these dishes which we all shared family style.

We started with the Calamari P250 and the Charred Octopus  P365 and both were very well cooked. The octopus was amazingly tender and the combination of chick peas, chorizo, salsa verde, anchovy butter was unlike anything I’ve ever tasted. It was Deb’s favorite dish.

What really surprised me was the Chorizo & Shrimp Flatbread Pizza P650 topped with piquillo sauce, Manchego cheese and a generous amount of chorizo. They have good chorizo and it appeared in several dishes. I loved the taste of the Manchego cheese on a pizza. It had a more aggressive flavor than the usual boring Mozzarella cheese. I also liked the thin and crispy crust. This is a must order!

We were all so busy enjoying the chorizo pizza that by the time I ate the Fig & Prosciutto Flatbread Pizza P530 the crust was cold and hard that’s why I didn’t enjoy this as much.

Another favorite of ours was the Asada Steak with Pear Salsao Taco P320.

Tender pieces of strip loin steak garnished with fresh pear pico de gallo and cilantro creme on a soft taco was a delight to eat. The sweet pear was a good contrast to  the savory beef. Make sure you allot one taco per person when you order this.

I think the best deal on their menu is the U.S. Hanger Steak with Roasted Bone Marrow P590. Although this was Matthew’s order he kindly shared a piece of steak with me and grudgingly gave me a tiny bit of bone marrow. The steak was very flavorful and quite tender. In other restaurants half a bone marrow with some bread would cost more than P300 already. You can also add a bone marrow to any of the grilled meats for an additional P200 only. They did a wonderful job roasting the bone marrow to perfection. It had a slight crust and the inside was soft, oily and killer good. I’ve had over cooked and dried up bone marrow in more than one restaurant in Manila.

Most Mac N’ Cheese use a white sauce flavored with cheese. This version tasted like all cheese and it was rich and gooey. Half a lobster tail was a good addition to the pasta. This is good for sharing since I don’t think I want to eat a whole order of this. A few bites was more than enough for me.

Both pastas were ok but with so many more interesting choices on the menu I’d give the pastas a pass.

I’ve seen lots of pictures of the OMG cake on Instagram and I’ve heard conflicting reviews. What’s my opinion?

After my first bite the first thing I said was, “OMG!” This dessert made with homemade lava cake and garnished with homemade chocolate crumbs, milk chocolate cereal balls, 2 types of chocolate ganache, chocolate syrup and a sprinkling of Todd English sea salt is the perfect execution of contrast in flavor and texture. There’s milk and dark chocolate flavors with a little crunch and lots and lots of creamy goodness. The salt was just right touch. Shockingly only Elisa and I loved and ate most this cake since we’re both certified chocoholics. 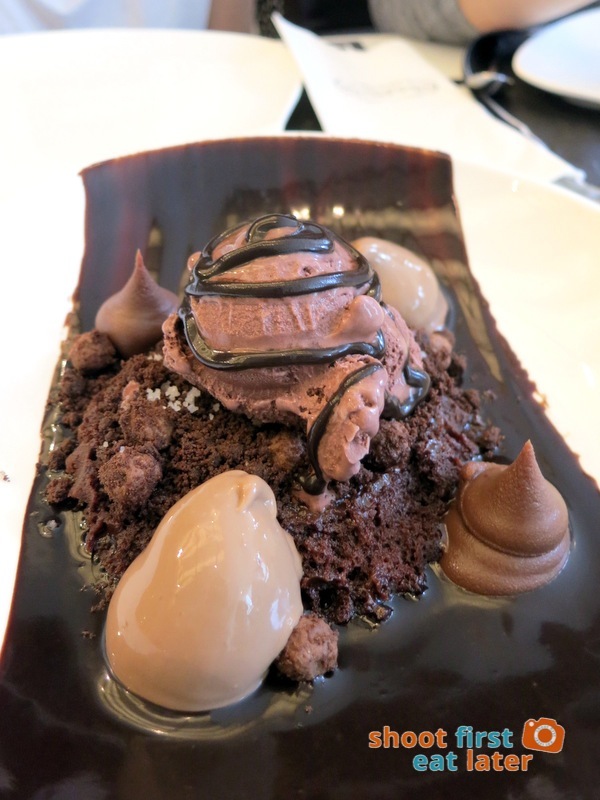 Deb and Pat preferred the S’mores P440 made with homemade graham crackers, marshmallow and vanilla gelato. I really didn’t get this dessert since I found it cloyingly sweet and a bit boring unlike my beloved OMG cake.

Maybe we just ate too much but the bill came to an average of P1,000 per head. We just had a few pieces of fig & prosciutto flatbread and Mac N’ Cheese for leftovers. Overall I was really pleased at how good the food was. 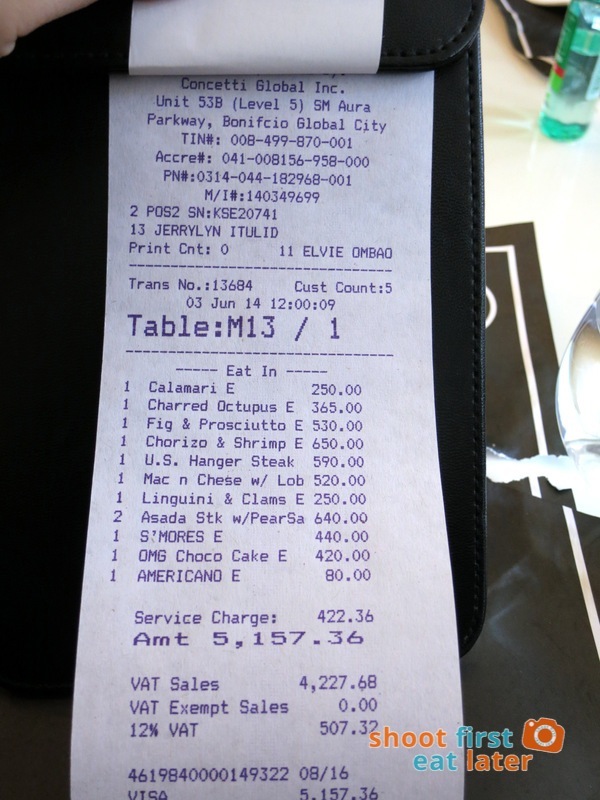 They had a second floor and a partitioned area for private functions.

There was only one ladies restroom on the ground floor and it was a big room. I liked the lavatory with the hanging faucet.

Yesterday we went back for lunch so Deb’s two other kids could try the food we all enjoyed. I also got a chance to take pictures of the merchandise on display. Too bad they weren’t ready to sell these since I had my eye on the wild mushroom porcini salt. 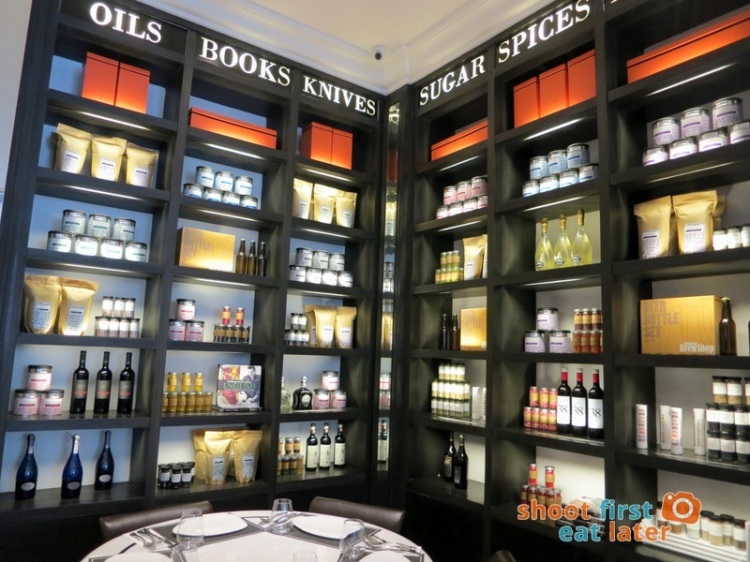 Our repeat orders from our first time were the charred octopus, carne asada taco and chorizo pizza.

I ordered the Fried Oysters P320 since I love the Japanese and Chinese interpretation of these and I was curious how Todd English would present it.

The plating was quite nice and the four pieces of oysters didn’t look too paltry. While the oysters were fresh and the batter crisp I didn’t quite like the too sour thingies on top. The menu said it was lemon segments but it sure didn’t taste or look like lemon. The caviar wasn’t noticecable either. I prefer plain fried oysters with the sauce or dip on the side.

The boys wanted to order the hanger steak again but were convinced to try something new and since the server said the Boneless Ribeye P1200 was good for two they ordered that. When the steak arrived the first comment was, “This isn’t enough for two!”

The kids attacked the steak with gusto so I wasn’t able to try any despite my efforts to steal Martin’s share. Matthew proclaimed it better than the hanger steak but he missed the bone marrow. 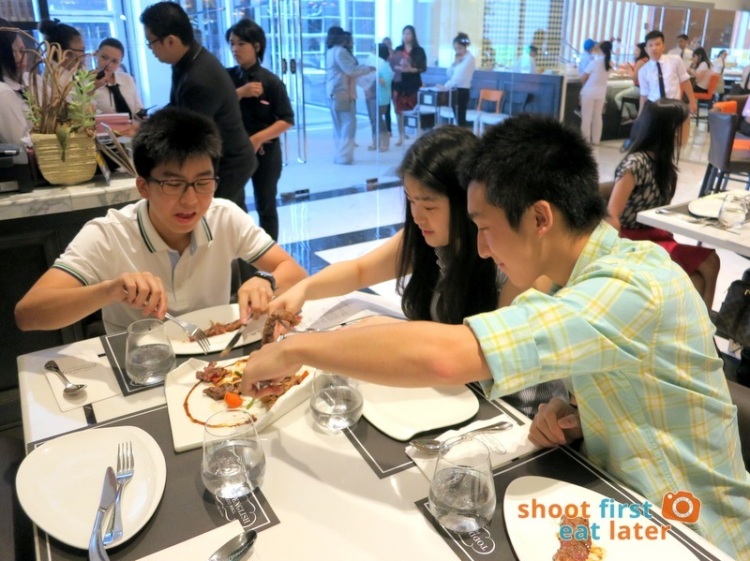 On our side of the table the three of us decided to order a few dishes and share. First that arrived was The Food Hall Burger P300. Service yesterday was super efficient and the food came out in quick succession. I wasn’t even done taking pictures of one dish before the next one arrived.

Burger made with freshly home ground 4 cut beef, fried onion, homemade smoked bacon, Gorgonzola cheese, BBQ sauce on the softest toasted brioche bun. When I took a bite the strong taste of the cheese and bacon made me grin but unfortunately that’s all I tasted. Both ingredients overpowered the burger and I barely tasted the soft beef patties. I loved the bread though much better than an ordinary hamburger bun. 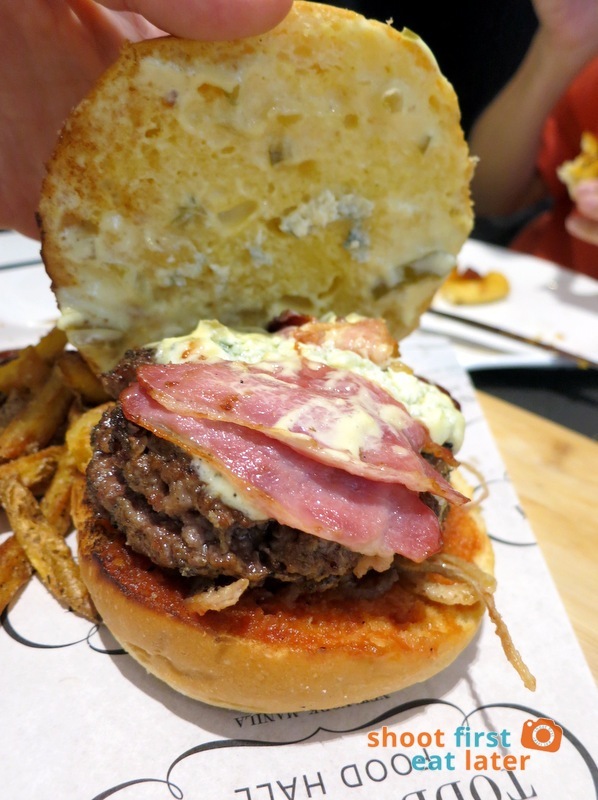 The portobello mushroom pizza with truffle vinaigrette and fontina cheese is another winner! It’s tie with the chorizo pizza in my opinion. If you like mushroom you will be blown away with how fragrant this pizza is.

For our protein we ordered the 2 day brined T.E. Pork Chop P430 which was a double thick French chop. You would think a pork chop this thick would be hard and dry. It was very moist and almost had the texture of ham. It’s that soft. The only problem was its lack of seasoning. It looked gorgeous but it was quite bland. They should improve the brining liquid.

Martin was daring and wanted to try something new and he chose the T.E. Two Way Duck (good for 2) P650. The two ways were a duck leg confit and sousvide duck breast. The confit wasn’t as crisp as others I’ve tried but the duck breast was succulent.

The star of our lunch was the unassuming Risotto Paella P480 which arrived in a tangine.

It looked like a combination of cioppino, risotto and paella. It was unbelievably good and there was a generous amount of plump imported mussels and some sandy clams. I even commented that there wasn’t enough rice and too much shellfish. There was also chorizo which I appreciated. If you don’t eat meat be sure to tell your server to leave the chorizo out. My only comment was towards the bottom of the dish the tomato sauce got to be more concentrated and tasted a bit too sour. We had two orders of this!

Look at these happy faces and empty plates. There’s something for everybody and I guarantee you will like the food at Todd English Food Hall. I want to try their sushi and oysters next time.