Ever since I saw my cousin Sidney and Mary’s computer table I became obsessed with keeping mine as neat and clean. So this means no leaving of cables or doodads on the table. Each time I needed to sync or charge my ipod I’d take out the cable from the drawer and put it back in after. It’s the same thing with the card reader for my digicam’s sd card – in and out.

So when I saw the Griffin Simplifi on Engadget I decided it was the answer to my cable problem. Before buying it I tried to find a similar knock off in HK. What I saw was the Simplifi selling for twice the price than in the US.

I got my new toy today c/o Amazon and my personal shopper and courier, Tisay. Thanks Tisay for bringing it home and Grace for accepting it into your home. 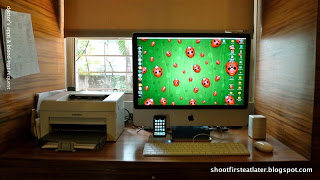 Flash drive attached to the usb hub at the back