There’s so many new restaurants in Bonifacio Global City and I don’t think I’ll ever catch up and get to try them all. Take it one restaurant at a time, Grasshopper.

RioZen’s first branch is in Little Tokyo in Pasong Tamo. We tried their new branch at The Fort. 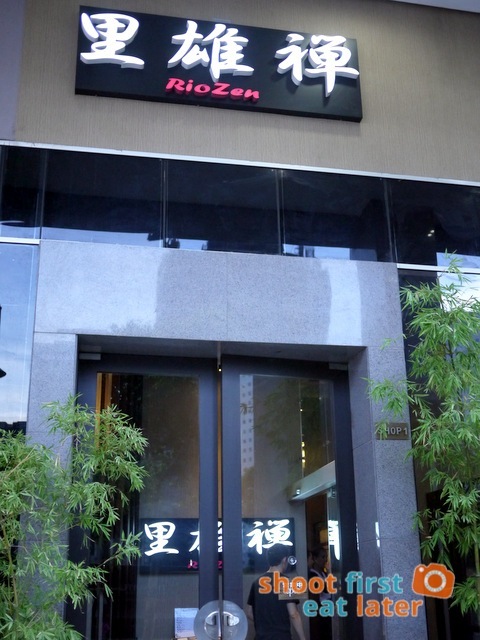 Uni is my favorite sushi and theirs was fresh and briny.

I’ve had better gyoza in many, many other restaurants.

Sure the steak was tender and tasty but did it need to swimming in so much oil?

I’ve always wondered how some Japanese restaurants get away with charging so much for a portion of chicken cut up into small bite sized pieces and calling it one order.

I love the rice container.

This restaurant had two pages of kushiyaki or grilled skewered food. Each plate came with a tiny dollop of miso sauce for dipping. That miso was the best part since it brightened everything we dipped into it.

It wasn’t surprising that the pork belly was the most delicious.

There was more eggs than meat on this delicacy which I quite liked.

No one ate this plate of ampalaya because it was soaking in oil. We didn’t even bother to take it home.

Andrew ordered a bowl of tempura udon and he couldn’t finish it so he gave it to me. I thank you very much Andrew since it was the dish I enjoyed most next to the uni.

I’ve eaten with Jason in a Japanese restaurant twice and both time he ordered shake chazuke which is white rice with green tea and topped with salmon and served with a nob of wasabi. I don’t think I can eat this but he seems to love its simplicity. Give me a bowl of Japanese fried rice anytime and I’ll be a happy camper.

I wanted to eat sukiyaki but they said the shabu shabu was their specialty. Even though the beef had little marbling it was quite tender. That’s the best thing I can say about this since the bowl of veggies, beef and noodles I ate was totally bland and tasteless. Save your money and order something else.